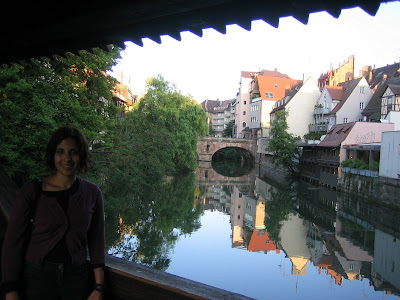 I do not think that September is going to be one of those blog-a-day months. We are already at the ninth day and despite a really intensive conductive beginning to the month there is hardly a blog posting to show for it!

If I manage to get in an Indian Summer holiday then more than likely October will be just as lean!

Please don’t desert me, I may be too busy to write but I am storing up the stories.

Stories such as those about six-year-olds playing trains while wearing my dad’s old fireman’s hat, at the same time as learning how to walk around on their knees, or about learning to sew with old fashioned wooden sewing hoops and real silk threads that belonged to my Mum when she was a child.

There are also more stories from the stroke group, who are continuing their campaign to teach our new client to talk and to walk. To add to “pink flower” and “green leaves” from last week, on Tuesday we had “Yes” and “No” instead of "Na, na, na, na", and a wonderful description of a Monet painting that any art critic would be proud of. With the help again of the rest of the group, the Monet picture was described as having “ blue sky, green umbrella, hat and lady”.

We also had the same new client walking out of the group at the end of the session, without his stick and with lots of smiles.

So yes, there will lots of stories to tell when I can find the time. Perhaps I will find Old Father Time during the Indian Summer holiday!

There has been a good reason for the lack of time for writing, as well as lots of work: this week’s visitor.

One of the “dots” on my map flew in to Nürnberg for a couple of days for an intensive conductive fix at the end of a long summer break, with the aim of returning to her work with renewed energy. As she got ready to board her plane, she told me that it had worked.

The “dot” was, a young conductor who works for a charity in Canada.

We have just been having a very intensive, post-graduate, two-day, unofficial “training course”! It was like my "work” always is, lots of fun and full of bits-in-between.

We have “done” stroke, multiple sclerosis, aduts with cerebral palsy and the school group. We have sewn, sung, played trains and memory, and covered András Petö, Mária Hári, the Petö Institute and NICE, all sprinkled with as many bits-in-between that we could manage. We did this all in the space of just forty-eight hours!

The NICE-trained conductor from Canada is probably already asleep on the plane winging its way to England. And at this very same moment, I am preventing myself from falling asleep on the tram on my way home from the airport, by writing this blog posting.

One of the reasons for this visit was really the same old problem, rearing its head up again: too many very young conductors work alone or in pairs without an older experienced conductor to turn to and the managers of their centres failing to acknowledge the conductors' need for tutoring or supervision. The same old story all over the world! Maybe if this changed there would be a slower turn-over of conductors. With a more permanent work force establishing itself centres could develop in all sorts of interesting directions.

In the early stages of the conductive centre here in Nürnberg we had supervisors for several years. With a good support system in place conductors stayed put for a long time. Two of the very first ones are still here thirteen years after the first conductive groups were established, with another in her eighth year.

This stability means that many projects have developed in many interesting areas. Continuing personal contact with schools and kindergartens, physiotherapists and other people with whom the conductors work is essential. Having long-term conductors has been a contributing factor to the survival and of the development of Conductive Education in our city. Anything that can be done to foster such a thing can be only to the good.
Posted by Susie Mallett at 00:48