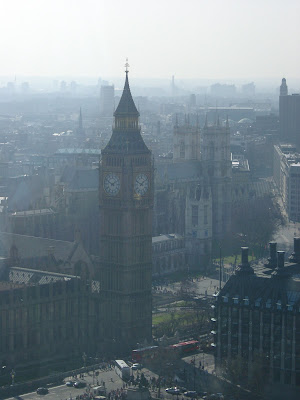 I often wonder what the German-speaking world must think of us Brits.

I am sure that when I am in Germany I don’t do an awful lot to discourage them from their opinion that we are on the whole more than a little bit eccentric!

While on my travels over the past few weeks I acquired a newspaper from Vienna, a freebie called the Kurier.

It has, just like many of the freebie papers that come through my door in Nürnberg, an article on its back page about Britain. These back-page snippets are often anecdotes about British life, or occasionally there is a story about a British celebrity or the Royal Family.

In this Austrian paper it is a story about London Cockneys that has caught my eye. Cockneys are the people from London who are born within the sound of Bow Bells in the east-end of London, people like my grandmother and grandfather and all the great aunts, uncles and cousins who were part and parcel of my colourful childhood.

I can remember being in parties in our “only for best” front room, moving amongst people who were all speaking in a dialect that I loved but rarely understood, and sometimes I even heard a language (Cockney-slang) quite foreign to my ears. It was like being at home in a foreign country. These Cockneys were so open and friendly and loud, and very funny. So different to us gentle, reserved and private Norfolk folk who to the Cockney ear also spoke an unintelligible dialect.

Together we made a happy bunch and to an outsider listening we were almost certainly incomprehensible!

Back to the Wien Kurier

The Kurier tells us that on Roman Road in the East End of London where, my niece-in-law tells me, you can buy the best pie and mash with gravy in the world, there is a cash machine with a button that gives the option to choose your language. The most popular choice, it seems, is Cockney rhyming slang!

Yes, this really is a choice and many people seem to enjoy using it. There is, the article tells us, always a queue. Some of the users, maybe tourists, need the help of the locals in the queue to get their hands on their money.

Some of the people quoted enjoy the joke. Others are sceptical. Some think it is all an advertising campaign, other think it makes a jolly change. The foreign newspapers add it to their list of British eccentricities!

Most of the readers of the Kurier will have no idea what Cockney rhyming slang is. They may be none the wiser from reading this article which tries, unsuccessfully in some cases to translate it. My sister looked over my shoulder as I translated the article for her and asked “Why does it say es ist too much, kritisiert ein Eastender, half in English and half in German?” I explained to her that this is a very popular and at the same time very confusing journalistic style in common use in many German newspapers. Throwing in a spot of English is very trendy.

What is “too much” we will never know but quite possibly it is the use of rhyming slang in inappropriate places. Another Eastender is quoted as saying that it is only a treat for the tourists. Real Cockneys wouldn’t be using the cash machine anyway, as they would all rather hide their money under the mattress.
Making connections
Whenever I write a posting about my life I always wonder what connection there is, if any, to Conductive Education. In this case I first thought that the connection was only that my interest in language has been generated from being in Hungary, then in Germany, and from working in different countries as a conductor, facing the many problems language and translation problems that this presents.

That was until I read that the original purpose for using Cockney slang has been diminished through its exaggerated use in everyday speech. This led me to think about whether the exaggerated use of the so called “conductive principles” (the one-two-three, and plinths and ladders) in many non-conductive settings has assistied in doing the same for Conductive Education.
While some terms have become well known the original meaning has perhaps been lost.