A wedding made in Märchenland! 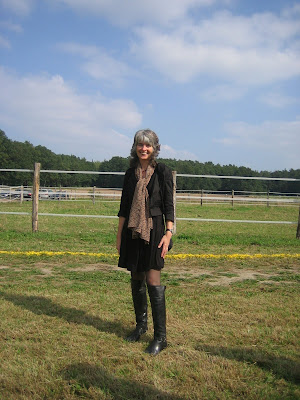 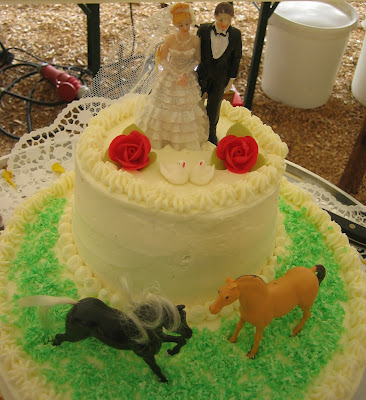 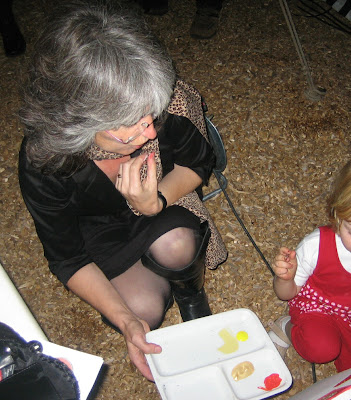 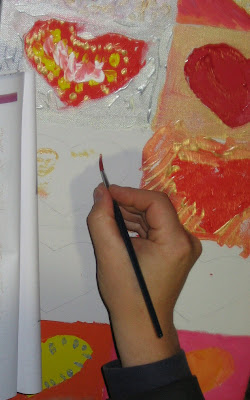 The fairytale wedding of the year!

I have lived in Germany for sixteen years and yesterday I went to my first-ever Germany wedding. I very much doubt that this was a traditional German wedding, but I have nothing else German to compare it with so I really don’t know.

I think that it was probably something very original!

Despite the marquees and the country setting, at the Brautpaar’s riding school-farm, it had nothing like the pomp and circumstances of an English Home Counties wedding either.

The official signing of papers that has to be done in a registry office took place on 09.09.09. with just a few family members present. Yesterday was the day of the big party, the celebration with one-hundred-and-fifty friends and family.
It was like something out of a romantic comic book for teenage girls. It had all that such readers would wish for, with ponies, flowers, Greensleeves strummed on a guitar and a princess-bride on a black stallion.

An open-air chapel had been build in the middle of a field. Two of my old kitchen chairs (this couple got all the furniture that wouldn’t fit into my flat when I moved last year) had been covered with dusky-pink velvet tied in place with garlands of flowers and hearts.

The priest with his make-shift alter, with homemade wedding candle, stood beneath a bower of yellow marigolds.
A single line of marigold petals was strewn for 200 metres on the ground to mark the way from “parking-place” field to “chapel” field, with several marigold petal hearts “painted” by the bride’s father on the wayside.

As we left the cars behind us and began to follow the “yellow-brick-road”, there before us was the bride, hitching up her gorgeous white dress, being helped by her groom on to the back of Lucifer her big black stallion.

The bride is a riding-teacher for disabled and non-disabled clients, so she didn’t really need the help of her groom to get up on her favourite horse, but it looked very chivalrous in front of us, all with our cameras at the ready!

The white bride on the black horse was led by the groom into the open-air marigold-bower chapel. The one hundred-and-fifty-strong congregation sat in a horseshoe, perched on the lowest of the practice jumps that they could find and on typical German bier-fest benches.

Each and every member of the immediate family took part in the ceremony, with the wonderful Polish, catholic priest cleverly pulling together all the strings of the bow.

The music ensemble from the church, that included the bride’s sister on flute, had one extra member for the day, the groom’s Dad playing bass guitar. Groom, Dad and co. were also on the menu for later in the evening, with their rock band “Corporal Defect”.
Mums, sisters, friends and Dads all had their roles to play and bits to say or play during the hour- long ceremony that took place in glorious sunshine.
It was, however, the men who stole the show!
First it was the groom with his unrehearsed words as he handed over his ring to the bride, but then came the fathers who, with tears streaming down their cheeks, reduced us all to a weeping mass! Through their tears they managed to produce some wonderful, spontaneous and heartfelt words for their children, which of course produced even more tears.

With the rings exchanged, blessings said and the tears dried, it was time, so the priest told us, to party.

First came the champagne toast in the aisles of the marigold-horseshoe chapel, closely followed by coffee and wedding cake served in one of the marquees higher up on the riding place, with its fresh, gleaming, white woodchip ground and beautiful view over the still green fields.

Despite the warning in the invitation about the dangers of wearing high-heels on a farm there were still a few brave and obviously well-practised souls doing extremely well in theirs.

Like many of the other guests I had polished up my black winter “riding” boots for the occasion, and I even saw a pair of Doc. Martin’s on show!

The only that thing I missed were the hats, not one of them in sight. So different to an English wedding, where everyone has to be so careful with their choice as to not outshine the mother of the bride. There were actually a scarcity of ties too, a half a dozen perhaps but no more. Some Germans actually confess to not knowing how to tie a tie! Having tied one for many years every morning before school I am always more than willing to give them lessons, I know a variety of knots too!

After coffee and wedding cake, champagne, chatting and strolling round the farm stroking horses it was time for the main feast of the day. We were all seated at the long rows of tables decorated with pink flowers and tall candles, giving the feeling that we were at a medieval banquet.

First came the Hochzeitsuppe, the wedding soup, a clear soup with dumplings, then lots of the usual German meaty fare and the most amazing array of salads and vegetarian dishes imaginable.

During the feasting the same band played as had performed a few years ago at my birthday party, providing then as now a gentle music while we ate and quietly chatted.

Later on in the evening came the rock music, with lots of intervals for performances, readings, karaoke and more, from family members and old school friends. Then at midnight came the final midnight feast! What would a German wedding be without its sausage and Schnitzel?

Yes, there were bits-in-between here too. Not only the performances during the music intervals in the late evening but also other open-air activities going on before it got dark and before the dancing began.

Behind the marquee we had set up the photo studio. I had provided an antique frame that we used to frame the faces of all the guests for the wedding photo-album.

Then there were the pony rides for the children organised by the bride’s riding-school pupils. Unfortunately they really were ponies, very small ones. This meant that any wannabe adult riders just stood by dreaming of maybe one day riding one of the two black stallions that were spooked by the music and galloping round the neighbouring paddock.

In another corner of the marquee, just behind the stage, I set up the easel for the painting corner which proved to be very popular, especially with the children. The “event” went on so long that we had to rig up some make-do lighting as the darkness drew in. The bride had requested that the guests would be asked to paint them a picture.
So paint they did!
They decorated the hearts that had been pre-drawn on a couple of canvases. It was my job to set it up and supervise a bit, but all I really had to do was help the three-year olds, the adults managing well enough alone!

Everyone was in full agreement that it had been the best wedding ever!

The bride commented in the affirmative with “Yes it really was a most romantic day”.
This was an understatement. The day had been pure romance from the moment that we stepped foot in the farm gate until the moment that we followed the row of Christmas lights now marking the "yellow brick road" back to the car park at midnight. The day had had a really happy soul and it brought so much joy to everyone who taken part.

PS Food for the soul

I did something else for my soul too. Apart from the dressing up, which was fun, I did something that I have never done in my life before.
I went to see the hairdresser very early in the morning!

Of course I have been to the hairdresser before, and early in the morning, but that was to get my hair cut. Never before have I been just to get the hairdresser to make my hair look festive! She did a grand job and I came out with a head of curls, something thatI have always wanted.
I loved my curls so much that I may do it again one day, just for fun, just for me and my soul, without having a wedding to go to!
Posted by Susie Mallett at 20:34