The story of the red and yellow tricycle 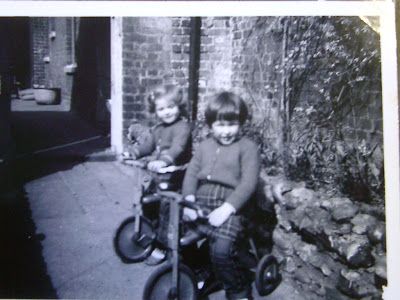 The wind of change

The wind changed direction sometime over night, there were no aeroplanes crossing the cycle path to work near the airport to make me stop in my tracks and look up and dream of taking a trip somewhere, even if only to England. As the wind had changed there were no white patches of frost on my right-hand side that had chilled my legs as I passed them yesterday. This morning at 8.30 a.m. it was eight degrees instead of the zero degrees of yesterday.

A burnt-out truck was being pulled along on a trailer beside me and got my imagination running wild. All sorts of images appeared. I invented many stories all in a matter of seconds, about how this could have happened.

I looked at all the odd, sometimes quite ridiculous, names given to small businesses and printed on the sides of the numerous white vans that travelled up or down the dual carriageway beside me.

I received one or two smiles from my few fellow-cyclists, and I gave nods of acknowledgement to car drivers who waited for me to pass.

I have much more contact with people and the world when on my bike than I do when I travel by bus.

What has this to do with Conductive Education?

While I was cycling this morning a film suddenly started showing in my head of something that happened many years ago when I was studying at the Petö Institute. It was 1990, the time when I was working in the International Kindergarten Group.
I was working with a lively four-year old from Britain, who was full of the joys of spring. He always arrived at the Petö Institute, often at the same time that I did, riding on his bright red-and-yellow three-wheeler. Yes, he did have a stick at the back so Mum could give him a bit of an extra push up Kütvölgyi (the hill on which the Petö Institute was situated) but he was still the only non-walker in our group at that time who arrived at “work” under his own steam.

His brave Mum had come from England with no wheelchair, no blue-and-white stripped buggy. She had brought only this amazing red-and-yellow tricycle. A disabled little boy whizzing up the hill on a bike was a rare sight at that time in Budapest.

Why did this image suddenly come to mind?

It was because I realised how passive my journey to work had become during this incredibly long and cold winter, while my bike had remained in the cellar. Most of the winters during the past ten years I have cycled almost every day. Only when it was really icy or extremely cold did the bike stay at home. This year we have had a lot of snow and many weeks of very low temperatures. I have travelled by tram and bus almost every day that I was in Nürnberg since the end of November.

By 'passive' I don’t mean that I wasted the time on the journey. Many a blog has been written on the tram and many a Time Magazine read. But through reading and writing and through sitting still and not cycling, I would be cut off from the world around me. The windows would be either steamed up or dirty and there would have had to be a particularly bad snow blizzard or a very pretty hoar frost to attract my attention enough for me to look through the window and beyond, and to bring me back in contact with “reality” and to become aware of my fellow travellers.

For the past three weeks I have been out on my bike again watching the world go by, seeing the frost, or no frost as this morning. Seeing the aeroplanes overhead, or not as this morning. Hearing the drone of the planes as we could yesterday with the cool crisp air and easterly wind, or not as today due to the warm change. Cycling faster or slower depending if the wind is in my face or in by back.

On my bike I am writing blogs in my head, training my memory, having the chance to write them down only after work is finished a few hours later.

Today I realised why it was that this little boy on his red-and-yellow tricycle in Budapest had no end of stories to tell on his arrival in the group. He was wide awake, alerted to his surroundings through his journey and he had been using his own energy to get himself to "work", just as I was this morning. He experienced so much in such a short time. He couldn't drop off to sleep or hide behind a book, like I could on the tram or his friends could in their wheelchairs. He had to have his wits about him, especially in the Budapest traffic.

The boy with the bike used his to get everywhere in Budapest. He investigated the peculiar packaging in the supermarkets, he could discover for himself the funny pictures of seven-headed dragons on the cornflakes packets. He used his bike to ride on and off the underground, but had to be helped on the very long escalators and had to get a lift on to the old trams. He could ride around Moszkva Tér looking at what the Nénis (women selling wares) had on offer. He was mobile and active.

He was free to come and go alone on his small bike, he could make his own decisions at what he wanted to look at in the shops and his small vehicle fitted in spaces that a wheelchair couldn’t go.
Just like me he loved to tell stories. His were all about what he had experienced in the Budapest of 1990 on his bike.
I wonder what happened to him. I wonder whether he is still getting to “work” under his own steam, like I am.
Posted by Susie Mallett at 17:42