Painting the space I work in 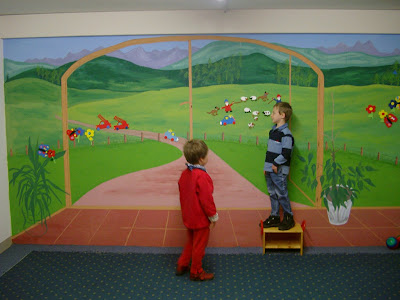 Looking out of our "extension" the wide, wide world outside, 2004 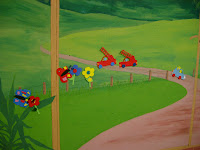 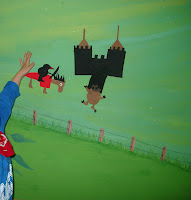 They all came to "play", the farmer with his sheep, the fire brigade, the police and the Knights of the Round Table, 2004
Adapting our environment
Over the years I have had several chances to put my artistic talents to use in order to adapt or change the environment that I work in as a conductor.
One previous project was to paint a house on a wall in one of our work rooms. I placed mirrors in the lower windows that we use with our younger children during the standing and sitting programmes. The flower beds in front of the house are alive with wildlife, all sorts of creatures to be indentified and mimicked.
Another project, in my opinion the most successful, was in a room in a cellar. The room is small and dark, with only two tiny windows up high near the ceiling. its walls, where not covered in shelves and wall bars, were painted a very dingy grey.

A colleague and I often used this room for the oddments of work that we did between groups, after school, or whenever the two main conductive session rooms were in use. Neither we nor the children much enjoyed being there, and we were always pleased when summer came and we could take our work outside.
Building an extension
We needed to do something to make the winter months more bearable and to give the room a new dimension. My colleague's one and only wish was that we should make the room look bigger.
What we needed was an extension, and all for the cost of a tin of paint!

I took myself off to the tropical plant department of the local garden centre and took lots of photographs of the conservatories and greenhouses on sale there. I even sat myself down in a gorgeous rocking deckchair and did some sketches.
After weeks of planning and measuring, and doing some drawing on an unusually large scale, it was time to get out the paintbrushes.
I received help from colleagues and clients with the initial covering of the wall to be "extended", with huge areas of colour, but after that I was mostly alone Even now I still add bits and pieces with the help of my clients if they have the urge to do so but initially putting in the detail was more or less down to me. It took me hours, hours that I spent alone in the cellar, after a busy day of work, feeding my soul, relaxing with a paint brush, and creating space!

You can see in the photos above the result of the research and the hours of wielding a paintbrush. You can see what happened to our cellar!
Letting in the fresh air
This cellar became a place where we could open the door and let the fresh air flow in. The cellar got new windows to let in the sunshine. We now had fields outside to go running and walking in, and further away hills and forests to tramp through.
We had a field were a visiting circus would camp and a hillside that could be used by the villagers as the site for their Sommerfest. There were winding roads where accidents took place and the ambulance and police would arrive.

When I work in this room I plan craft projects which last for the whole of the time that the children attend a block. They choose a theme themselves and we create anything and everything around it. We try to incorporate the scene “outside” our room so we can step outside the conservatory doors into the green world beyond.
We lift our arms to stick our flower creations on the wall, we climb up ramps or steps in order to place birds on the highest branches or a police-helicopter in the sky, we crouch down to paint new leaves on the plants and to place things on the floor in the house.

The new extension to our room did more than just make things more bearable. It makes life in the cellar fun.
It also all makes my work a lot easier. We can let our imaginations run wild.
Posted by Susie Mallett at 14:34