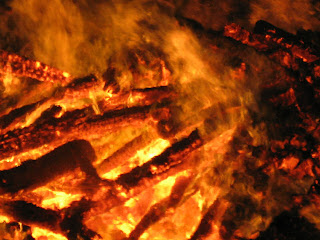 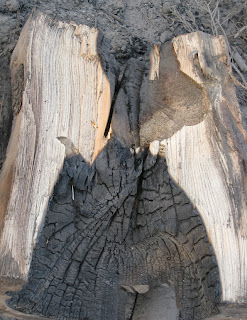 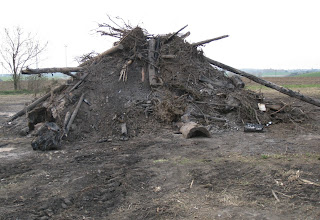 The Easter Fire, before and after, April 2009

It was time to get away from the computer and take a stroll in the evening sunshine. My young client had, I think, been waiting all day for these two hours, asking me at breakfast what time we should meet, again at lunchtime, and knocking on my door in between times on more than one occasion to inquire about our walk.

He was finding it difficult to know what to do with his day off, despite having really looked forward to it. It seemed that he would rather be out walking with me.

I was therefore surprised that at the appointed hour he was not ready and waiting for me, but he soon got himself organised and we were off. He had even decided for himself if he needed a jacket or not. He is learning fast!

It is almost three years now since we did some hard training, building up muscles and energy levels, so that he could join his father, brother and uncle in the Schutzenfest march through the village. He has been joining me on long walks ever since. He is amazed at the beautiful sights that he finds as he walks with me, places that he he has never seen before. On Friday he asked:
"How come I never knew these places before? It is herrlich (beautiful) here.”
It is because he couldn’t walk so far before.

I go walking every day when I am working here and now that he can walk such long distances that allows him to come with me. I sometimes miss the solitude of my lone tramps through the hills but his enthusiasm for his surrounding makes up for any doubts that I might have about not going alone.
Now he decides
He usually leaves to me to decide the direction that we should take but today he decided. This sunny evening he wanted to go up the hill to see the remains of the Easter Fire, my presence again allowing him to do something that he has never experienced before, just at it had done at the Tina Turner concert. I was now facilitating more discovery, allowing him to get to know his local environment just as his siblings get to know it when they go out to a music lesson, to meet friends or to deliver newspapers. I was helping him to become more confident in finding his way around the village and in behaving more responsibly on the streets.

Yet another form of facilitation. Not a touch of the hand, which becomes less as the need for it becomes less, but a hand leading my client into the unknown, making the ground under his feet feel safe. Facilitating the discoveries until he feels confident to facilitate them himself.

His family are brilliant. They include him in everything, the older siblings and their friends even take him with them to parties, but no one had ever thought that perhaps he too would be interested to see what this huge red, yellow, white and orange mountain of heat looks like the day after the festival. No one thought that he would find it exciting to feel the heat still penetrating though the earth that had been pushed by the huge tractors on top of the ashes. Or that the patterns on the half-burnt-out logs would be fascinating and bring inspiration to his paintings. Most important of all, no one thought that he might enjoy getting his shoes dirty, dragging them through the fire's cold outer ashes.

He saw it all. He smelt the smoke and saw how the wind almost brought the smouldering wood to burst once moreinto flame. He even bent down to feel the warmth of the ground under his fingers. Then he thanked me yet again for being there with him.
And that's good for me
I feel his joy so intensely when we do things like this together and he thanks me always with such meaning in his voice. He knows that I understand how important these "adventures" are for him and I am more than willing to go on facilitating more of his exciting “first time” experiences.

Dear Susie, Thanks for the lovely and uplifting posting today.

Kasey,
thank you for reading and for letting me know in such a nice way that you do so.

Such comments lift me and inspire me write more.