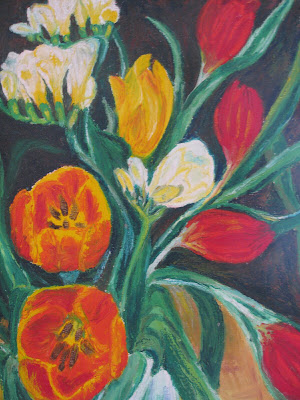 "Bringing spring into the home", by Susie Mallett, left -handed, 1997
YES, I AM SHOUTING!
I LOVE MY WORK ESPECIALLY TODAY

It was one of the best days that I have had for a long time. My stroke group went home exhausted and happy, and so did I.

Here are a few snippets that made us all smile.

The group was small today, which probably has something to do with why what happened actually happened. We could be spontaneous more easily and still gets lots done. All the members in this group had suffered strokes between 5 and 12 years ago.

There were just three in the group, two men and one woman, and me. One man and the woman are both recovering well from symptoms of aphasia but still struggling sometimes to find words, especially those words they would like to use to describe emotions and more abstract concepts. The older man, aged 48, is Russian. The other young man is very shy and very quietly spoken.

I had been in the office when they all arrived. I remained there for a few minutes longer and I listened to them greeting each other. The Russian man with aphasia asked with genuine concern in his voice (a new-found ability) how the lady was. She was delighted to be asked, I could hear this in the tone of her voice, I could hear her smile.
She answered ”Good, I am always good”.
She then went on to find enough words to tell us this story, which I have never heard before in the ten or more years that I have known her:
“I have been 'good' every day since the day four months after the stroke when I stopped crying. My husband came to visit me and I decided I wouldn’t cry any more. At first I didn’t know I had been crying so much. My husband had told me. He came to visit me one day and I decided on that day I would start living my new life and the crying stopped. Since then I can honestly say that I feel good every day.”

This was not said as fluently as I write it but those were her words. With some prompting and a bit of help from everyone in the room she found the words that she was searching for. As she explained to us, it is all there in her head but sometimes it just won’t come out.

“Why exactly four months,why not three or five?”

There followed a discussion on how individuals need different amounts of time to recover, to adjust to new situations, to mourn an old life and learn to live a new one. They decided it can sometimes take a lot longer than four months and perhaps sometimes less, it depends on the individual. The lady explained in her case it had depended a lot on the wonderful support her husband has always given her and her wish to communicate with him once more. She went on to tell us about other ways in which her husband has played a big role in her recovery, for example by insisting that she speaks up for herself, that she tries to speak herself to officials at the health insurance, or makes appointments at the doctors surgery for herself, and by playing Scrabble with her every evening.

I was wide-eyed and open-mouthed while listening to them, there was my stroke group discussing all of this, all quite abstract concepts, and they were doing it extremely well.

But wait, as the session went on it got better and better.

The Russian man began asking me many questions about a trip to Berlin that the two men are going on. It is organised by the association that I often work for and is to celebrate the 50-year anniversary of the country-wide association for the disabled.

I didn’t have the answers to these questions so I suggested that he should phone our main office. He was very surprised by my reaction, he had thought that I would do the phoning. The others all encouraged him to practise and then to make the call himself. We found one of the toy telephones from the children’s group, I hid around a corner and with help of his colleagues he began to sort out what it was that he needed to know. After this telephone practice we began with what my clients always call their “Petö”, some one, two, three, four, five on the plinth, at the wall bars and while walking the stairs, interspersed with comments on the phone call and suggestions for questions to ask.

When we took a break I fetched the real phone. The “questioner” has double vision so his friend, who is also going to Berlin, offered to dial the number for him and the lady in the group gave some good tips. She suggested that he did not to try to give too much unnecessary information about himself, but just enough to make it clear to the listener that there was not just a foreigner on the end of the phone but someone who had speech difficulties resulting from a stroke.

My colleague in the office was brilliant. She realised immediately what was happening although I kept silent. She was extremely patient and helpful, she was clear and precise with her answers. My client stayed calm. He was as pleased as punch and by the end had all the information that he needed.

By this point in the proceedings the group were all expressing how tired they were. The tiredness, they said, came from the talking and not from the physical movements. There was a general consensus that it was a huge step forward for them all to be able to talk so much that they became tired by it.

They decided that a sitting programme to finish the session was about all that they could manage, but first came the discussion about the need to talk and to discuss every subject under the sun, amongst themselves and within the group where they feel secure. They know each other well, every member of the group has time, understanding and patience, it is the prefect place to practise.

Not much sitting getting done

Now on to the sitting programme and although we remained sitting we didn’t get very far away from the talking.

What about this Dr Petö!

Our Russian group member told us he is going to Hungary for a holiday with his family and wanted to know about “this Dr András Petö”. Is he still alive? Could he visit his Institute? Would he be able to visit the stroke group to see what it was like there? I offered to write a letter of introduction for him as soon as the dates of his holiday were finalised.

We at last got started on some tasks at the table This is how far we got:

Someone complained that the stick was too heavy to lift. They asked why it felt heavier while sitting than it did lying down. I answered that it isn’t the stick that is heavy it’s more likely to be the effect of gravity working, and as always I forgot the German word for gravity (Schwerkraft).

I had to describe what I wanted to say by using other words, just as I teach the group to do. I came up some rigmarole which included references to Isaac Newton and apples. They got the gist but no one else amongst us was able to offer more information on Isaac and the eureka (I have found it!) moment that he had when formulating his theory of gravitation.

From this point the conversation moved on naturally from Newton to Archimedes who ran dripping from his bath so we are told, into the streets yelling eureka!

The Russian man in the group impressively provided us with half the information we needed to calculate the density of an object. Please remember this this client is recovering from symptoms of aphasia. From here there was no chance to return to hand tasks as we only had five minutes left, and we still had get on to Pythagoras, Icarus and then more Greek mythology.

We discovered that between us we know lots about many different things but there are a few pieces missing This was an opportunity not to miss and alongside the “homework” of incorporating some of the tasks into their everyday lives at the weekend, each member of the group choose one of our philosophers to look up on Google.

With the Google homework set each of the three group members set off, exhausted but happy, to discover all they could about Newton, Archimedes and Pythagoras.

We will Google the Greek myths next week!