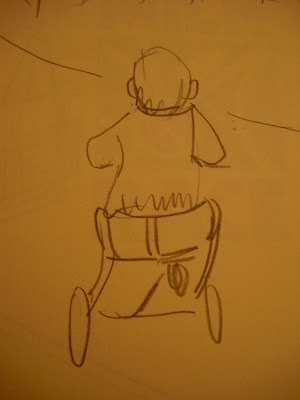 "I'm off", by Susie Mallett, Aberystwyth, 1985
Wheelchairs with power steering? That is the question.
I am sure that if one particular child continues with the group conductive education that she receives with us, and if her family continues to develop a conductive upbringing at home, then she will probably learn to walk some steps independently. She wouldn’t be climbing mountains although, knowing her and her determination, once she got started she would make a brave attempt to do just this.

She is nearly six years old and about to start school. She has been in a conductive group since she was two years old and has never had a wheelchair. The first time I that saw her she was “driving” a red bobby car, as many of our children do, as these toy cars are made locally. This child also has a buggy, a bike and a sledge. She gets around independently on her Bobby Car and bike and gets pushed or pulled in the other two vehicles.

At school she will need a wheelchair and we will need to teach her how to use it and how to get in and out of it too.
Who makes the decisions (and there are many)?
The most important probably is whether she should have a powered wheelchair, or not? Perhaps it is only the health insurance company that has the "power" to answer this. The difference in the price will make the decision for them and this will not be influenced by the needs or wishes of this child or family, or the recommendations of therapists or conductors.

I have been wondering for several months now about what is best for this child, a small girl who is highly intelligent and who finds it very difficult to have full control of her limbs.
How will she best be able to maximalise her potential, both in at school work and in her physical development, when she joins her first class in September?

We have been borrowing wheelchairs from a distributing company that we work with very closely, trying out the different possibilities. The first one brought to us had two rings to control the steering, both on the left hand wheel because the supplier had noticed that this little girl could grasp more easily, faster and tighter with her left hand than with her right.
This was soon rejected by all including the child. She didn’t know what to do with her right hand while she was struggling not to go round and round in circles using only her left hand.
She is now learning to move about the building in a relatively light and simply formed wheelchair, using of course both of her hands. At the moment it takes a lot of her energy to get anywhere. She will need a lot of training to maintain an appropriate posture. There is always the risk, when using a wheelchair for many hours each day, using one's own power to get from A to B, that deformities can develop from holding the body in a tense, assymetrical position when turning the wheels.
The big question is whether this little girl should be given a powered chair straight away, in this way avoiding the risks of developing an asymmetric posture, or woukd the risk of this happening b just as great if she receives a powered chair?

Once this child starts attending the new school will get to know her peers fast and have a big circle of friends who I am sure will always be tempted to push her, however well she learns to power a chair herself. As a group they will get places faster if they push their friend. I can foresee that she could perhaps become a passive wheelchair sitter.
We ask whether she would be more active in a powered wheelchair, she would certainly be more independent and always be in control herself. She would always be the one to decide where she goes, which path to take.

Would it be better to give her a powered wheelchair from day one? Perhaps one of those amazing bits of apparatus that could lift her high to the top bookshelf and bring her down low to play in the sand pit and allow her to get out of it with ease whenever she wishes.
Psycho-social and physical development
Would the one or the other have the better or worse influence on her social development, or on her psychological development? Neither would do much to develop her "physical" abilities, except perhaps of her right hand, but this could always be achieved by other means.

Over the course of several years use of a hand-powered wheelchair might well cause deformities, especially in the back, hips and legs, which could prevented in a powered wheelchair as long as a good posture is achievable.

I am not sure how much of this will be discussed when the final decision takes place.
This child has come to Conductive Education groups, with her mother and without, for four years. For the past three years she has attended an integrated conductive/Montessori kindergarten group. She is learning to be as independent as possible. She is still not able to get from A to B independently on her feet. She probably will never be able to do this at great speed, (although I will be quite happy to be proved wrong on this point).
How independent will this little girl be in a self-powered chair at the moment of her development I don’t know, since small as she is she will not have the strength in her arms to travel long distances under her own power. Would not a powered chair be the way to greater independence for her at school?

I don’t know, but I don’t have much say in making the decision either, neither I assume do the parents or other therapists. In the end the health insurance company will decide.

I am sure this child will learn to walk independently but until she does what method of getting from A to B should she have? But even if the answer to this question were not influenced by the financial situation, I still would not know what to choose, though I am tending towards imagining her in a super-duper high-tech, powered machine that would allow her access every possible nook and cranny in her new school.