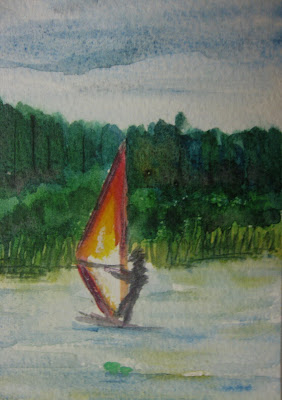 "The wind in my sails" ,by Susie Mallett, 1989
A huge change has taken place on the city transport system here in Nürnberg since the months before the 2006 football World Cup.

The Nürnberg Arena was one of those used in the championship (I think that England played Trinidad there, I was on holiday in Paris at the time!).

It was in the months before the football fever started that the transport system began to get its “new look”. This began with rebuilding all the tram stops in the city centre, lowering or raising them to provide easier access at ground level to new trams, that also now had no entrances with steps.

Pavements were lowered at junctions and other appropriate places and knobbly paving stones were set into the ground to allow the partially sighted and blind to find their way around independently. I noticed only yesterday that this work is still going on, it having just been completed at the end of my street.

Today while riding in a very spacious bus, with my bike, I picked up the latest newspaper from VAG, the company that owns Nürnberg’s transport system. The newspaper announced the introduction of new buses with spaces for two wheelchair users to replace those with space only for one, and in some cases none.

This will also mean extra space for babies’ prams and toddlers' buggies, and for bikes. The bikes take second place to prams and wheelchair-users but if there is space you are encouraged to take your bike with you on the bus, tram or train, all for the price of a child’s ticket. This service is provided in the hope that it will attract even more people into leaving their cars at home.I don’t have a car and I take my bike with me all over the place. I don’t however meet very many others doing the same.

I visited Munich often in the late 90s and noticed how many more wheelchair-users where out and about in the city than there were at that time in Nürnberg. It was so much easier in Munich for them to get around, transport possibilities for wheelchair-users were years ahead of those in Nürnberg and, I suspect, also other cities in Germany.

The World Cup brought improvements but it is a pity that it needed this huge influx of foreigners and the eyes of the world on the city for these changes to come about. There does, however, appear to have been a long-term change in policy, and of course the EU regulations help too. The improvements continue and with each day Nürnberg becomes noticeably more and more easily accessible for people with disabilities.