Angels in the snow 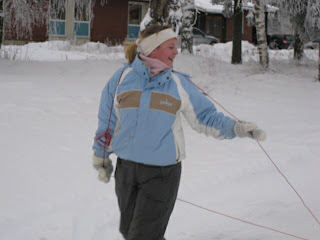 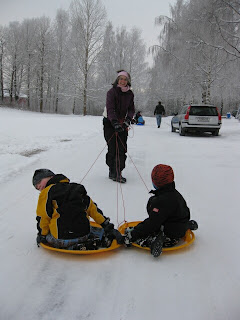 Hamar, 9th December 2008
Minus 18 - conductive upbringing with 14 rosy cheeks.
Shall we, shan't we?
Yesterday Angel Lill and I promised our six lovely boys an afternoon in the snow. Overnight the trees had turned fairytale-white, turning the world into a Christmas card (I was out with freezing fingers photographing them at 11.30 pm), and the temperature dropped to minus 18.

This morning Lill and I arrived at work prepared with all the gear, and at nine o’clock the parents came in looking very concerned, asking whether we were still planning to brave the elements. I had had a little experience of twenty degrees below zero in my first years in Germany but I have no idea how these temperatures affect these children. I told the parents that it was their decision and we could go out on another afternoon if necessary - after all, we are conductors, and therefore flexible!

We left it at that and after lunch all the children had decided for themselves, the temperature had risen to minus 9, which was warm enough for these hardened Vikings. All arrived warmed from their hot lunches, looking like teddy bears, wrapped up in so many layers that they were twice their normal size. Lill and I did the same, I donned in all her spare scarves and ear- warmers and it was out in the white wilderness.
Working together, out in the snow...
I have been sledging before, but only once in my life, at the age of 32 in Szentes, Hungary. I had been pulled along by the father of a fellow conductor and shown how to sledge downhill by my colleague János. I remember to this day the thrill of speeding downhill, screaming my head off and landing in the soft snow, so it was a delight for me to offer the same experience to “my” six Norwegian boys.

Of course snow is a everyday sight for these children but there was one who had never been on a sledge before. He did just fine and found it as exciting as I had done in Szentes those many years ago. As I sit and write this I can feel the ache in my back but it had been well worth pulling two sledges at once just to see the smiles, hear the screams, see faces covered in snow, and see the rosy cheeks. I wonder whether they too could feel their nostrils freeezing!

A few of the mums and dads joined us. One has offered to build a fire in a willow shelter beside the lake and grill sausages for the children’s lunch tomorrow. I can’t wait. I am more excited than the children. This is apparently a very traditional Norwegian custom in the winter and much more exciting than a summer-time barbeque.
...then back indoors

Today the group really started to work together, which made it possible to do all sorts of lovely bits of in-between stuff (as you may have seen from reading my blog, the favourite parts of my work are the 'bits in between', the enjoying-life bits).

I actually got Angel Lill on to the spare plinth today, working alongside the children, and I ran around facilitating them all. Tomorrow I have told them all thwill bemy turn to get on to the plinth, but Angel Lill says Noit is not as we have a visitor! Maybe on Friday!

After today’s plinth programme we did our standing tasks at the plinth, where we then we had a go at forming dinosaurs from bread dough made for us by the lovely Ellen. The dinosaurs had raisons for eyes and armour plate. It had been only the promise this afternoon of eating the freshly baked bread which tempted the boys in from their icy playground.
They didn’t want to come in doors at all, but the smell of bread wafting out to them was just too tempting and just as the sun was setting, at 2.30 pm, we were back indoors tasting our produce. Today was a day made up entirely of bits in-between, lots of smiles, good food and really healthy faces.
I'm so loving it
As have said so often, I love my work and I think that this time I may be near to tears when I have to leave these children and my NICE angels in just seven days' time.

Until then we are going to make the most of it, tomorrow its grilled sausages by an open fire at the lakeside, on Monday the other group is joining us to make marcipan dinosaurs with a chocolate coating, and we still have our “dinosaur’s love underpants” play to rehearse and perform.

Lill and I are exhausted (I actually fell asleep in the office over the computer both the last two evenings) but my six boys are banging on the door to come in in the mornings which makes it all worthwhile. I can recover back home under the Christmas tree for a week before the next conductive upbringing continues in northern Germany, on 26th December, with preparations for the next art exhibition!
PS I was actually quite impressed with myself this afternoon, as I was pulling two sledges at once and actually running on snow and ice without falling over. This is quite a feat for one of the older conductors amongst us, one who was brought up on the east coast of England where hardly a snow flake is ever seen in winter!
Posted by Susie Mallett at 16:32