Susie and Lill in Hamar. 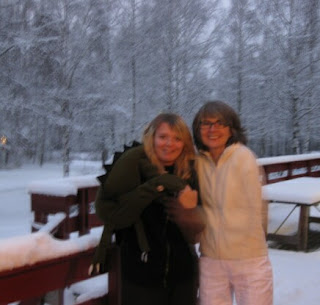 English Susie, Norwegian Lill and Stinky Stig - honouring Dr Hári and her spontaneity, 4th December 2008
Es ist der Hammer in Hamar with my Angel Lill!
I have heard so much about the PTØ Senteret in Hamar, Norway and now I am actually here, experiencing it for myself. The centre has two Norwegian conductors who trained at the National Institute for Conductive Education, Birmingham, UK, and two group assistants. Any other conductors needed for the two parallel groups are supplied by Moira in Hungary on a three-week rota.

This means that the Norwegian conductors work with a different colleague every three weeks. This makes the work incredibly difficult for them, especially as they are usually not leading the groups themselves which means they cannot plan in advance what they will be doing in the next block. These Norwegian conductors have learnt to be really flexible and incredibly good at what Dr Mária Hári always encouraged – spontaneity. We are doing her proud this week. Lill and I are encouraging spontaneity every day in each other, and we and the children are all loving it. The children are actually getting very good at it, better than us in fact.
Yesterday they actually stole Stinky Stig and we had to get the dinosaur police out searching for him. only to find on Stig’s return that he was missing all four of his legs. This meant that the dino Dr was summoned. He arrived in haste (spontaneous Lill in disguise) calling out for his surgical assistants to take blood tests and to operate and graft his legs on again. After much bandaging and injecting and TLC, Stinky Stig was put to bed for a week of bed rest.
In the dark

I had arrived at the centre in the dark, at eight o’clock on Monday morning very unsure of how this system could work. I cannot speak a word of Norwegian except for en, to, tre, fire, fem, which is essential for all conductors to know in as many languages as possible. Although I knew that the Norwegian conductors speak perfect English I had no idea how I was going to communicate in the group.
We all met in the office and were told which children would be in the group and who would be working with whom. I thought I would be working with Martha but I was actually with Lill Hege. I felt so sorry for her having to work with yet another new face. I thought that she was probably hoping that a conductor she knew would be coming, so she would not have to start from scratch again.

By the time that Friday came round, and Lill Hege arrived for work wearing a shiny hair band, very much like a halo, I was already calling her my angel. What would I do without her? Get by... just! With her it is such fun and the conductive soul is almost visible in all corners of the room!

As I have experienced before with conductors trained at NICE, Norwegian Lill, who only finished her degree in June this year, is a very capable conductor. She is confident, knowledgeable and lots of fun to work with. We don’t need to discuss much, everything just happens, and the children appear to love it.

We have fitted into a good pattern for the lying programme. I say the tasks in English , Lill Hege says them in Norwegian and we all count together. By the end of this week the children were working before Lill Hege got to speak. For the rest of the day I use my few Norwegian words, lots of games with hand movements, my English (which I have twice been told is very good) and of course I have my Angel Lill

Sometimes the children ask why I don’t speak to them in Norwegian but at the same time they are excited about how much English they understand. I am actually finding Norwegian quite easy to pick up because of the other three languages chasing around in my head and the children hoot with laughter when I say something in what I think could be Norwegian but is actually something I have made up from all three languages. They probably think I am talking Dinosaur language.
Pants

We have already created an amazing dino world on our fifth plinth, that we are going to need next week, so again we are going to have to be creative in order to find a new place for our art work. We have learnt really useful dino words, like scariest and knickers, underpants and cavemen, mystery and itchy, all from the book that I mentioned back in August: “Dinosaurs Love Underpants”.

On the first day of this block the parents probably thought “Who is this crazy lady who has flown into Oslo with a dinosaur stowaway in her suitcase and who is now standing here asking us to provide a pair of white underpants for their child to paint?”

One boy, and his Dad, really got into the swing of things when he turned up one morning superman-style, having donned white knickers over the top of his trousers.

The paper designs for these underpants are already hanging on the wall ready to go into production next week. Norwegian Lill and I are hoping that the children will put on a performance of the story next week for the parents and the members of the other group.

Why all the underpants? Because in our book we are told that the dinosaurs became extinct because they fought each other to their deaths tearing the best underpants from each others bodies, much to the delight of the cavemen who could then live a more peaceful life.As you can imagine the children love it.

The parents tell us that the children are actually running to the door in the mornings to see what Stinky Stig and the underpants dinosaurs have been up to during the night. I don’t actually run to work in the dark each morning, as it is extremely slippery and the past few days there have been 20 centimetres of snow to traipse through, but I would if I could… I am loving every spontaneous minute of each day, despite having to work well in to the evenings to prepare everything we need for another action-packed day.

We were in full action right up to the last minute of Friday evening. We swapped our programme round a bit and did our finer crafty creations (St Nicholus for 6th of December) in the morning to give us more time in the afternoon to paint at our makeshift easels, the wall bars, during a standing programme in the afternoon. This was a wonderfully successful activity, which we do every second day, with some amazing creations of dinosaurs appearing after we had looked at the pop-up dino book featured in an earlier blog.

I will be at the centre for most of Sunday… preparing for the next big action creating a dinosaur from rubbish. Which all the staff, especially Ellen the cleaner and “Girl Friday”, have been collecting for us. One Mum has even been collecting egg shells for us so we can have baby dinos hatching out in our dino world.

The atmosphere is prehistoric! Everyone in the building is in dinosaur fever instead of Christmas fever, which makes a change as we come into the second Advent week.

Which reminds me, I must ask Ellen to find us a table cloth and candles. This is a special request on Friday from our six extremely civilised, eight-year old boys, for our lunch table! Ellen is actually brilliant and I keep grabbing her and asking her to stay in the group to work with us. The children love her and we are a member of staff short, but she is too busy being Girl Friday to stay.

It will be an even busier week next week as we have one more child and still just the three of us, Norwegian Lill, Stinky Stig and I. We will fill the week with spontaneity and it will fly past as quickly as the last one did so we will not notice the lack of staff. Hopefully the three "Angels" in the group next door will continue with their unannounced visits which are so funny as the three adults scoot in on wheelie stools, each with a child sitting between her legs. We sing a bit, speak a bit of dinosaur talk together before they leave us to our "routine".

If any of you three are reading this more of the same next week please !