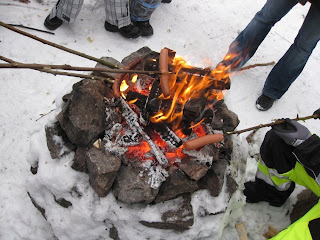 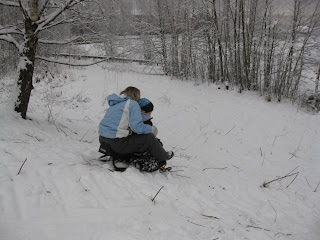 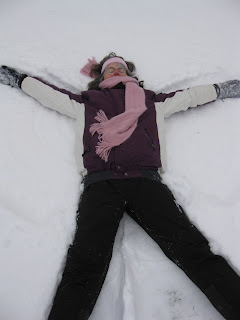 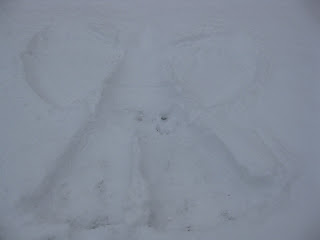 "No knives and forks, angel Lill and snow angel " Hamar, 2008
Only minus eight today!
A big thank you to the Hamar parents for a wonderful, conductive upbringing, lunchtime grill out in the snow!
As promised, on Thursday lunchtime we got treated to lunch outside with both the starters and the dessert being lots of sledging and rolling around in the snow.
The snowsuit programme as part of the "daily routine"!
At eleven fifteen after a wonderful lying programme, a dinosaur lesson and drinks, we got mountains of thermal tights, snowsuits, socks, gloves, scarves and hats into the room and started on a massive dressing up programme.
It is really difficult to put boots on when you have already put on so many layers that you are starting to move like a penguin. When a child has spasticity in his arms or legs imagine the effort needed to get those last layers of clothes on when it is getting virtually impossible to bend any part of the body!
We had a couple of children who got their clothes on for the first time alone, much to the surprise of their parents who were around to take the insulated children outside while Lill and I could start our mammoth dressing routine. It takes ages, but well worth it to get out in the chill, clear air and the daylight, still no sunshine though.
Doing the penguin waddle
When Lill and I were finally ready and all bundled up it was onto the sledges or out with the walking sticks with spikes and down to the lakeside grill, those who were on foot waddling rather than walking!
I have never seen a child with snow spikes on his sticks before, a few of my stroke clients in Germany have them but the children there usually hop into a wheel chair and get someone to push them when it is very icy! The child who had the snow spikes on his sticks today also does cross country sking which he learns at school. Most children in Norway are born with skis on their feet and it seems that even those with a physical disability get the opportunity to learn!
We didn't have far to go for our lunch and rounding the bend there was a delightful cosy opening in the woods with two gapehytte (lean-tos) and a bål (bonfire), surrounded by slopes for sledging which were just steep enough to encourage screams, to overturn the sledges and get faces full of snow. Slippery enough to make scrambling up again very difficult especially for me with a child in tow.
Each and every one of us took a tumble, but there was not a tear in sight, just smiling, snowy faces and rosy cheeks, and huge appetites.
Pigs in blankets
The dads in charge got the fire glowing just right for grilling and gave the call to come to eat. All the children took a seat on the wooden benches and were given a sharpened stick to put their sausage on. All of them grilled their own sausages over the fire and I being vegetarian grilled my banana, we then wrapped them in traditional flat Pinnebrød (pancake-like bread) to eat them.
The scene reminded me of szalonnasütés in the summer in Hungary.
The children took themselves off into the lean-to to play while the adults ate their fill then it was off onto the slopes again. More sledging and walking through the forest until the light began to fade and a few of us (me included) began to freeze.
Snow Angels
I hope we are giving the boys lots of exciting experiences, encouraging parents to get them bundled up and outside. I am experiencing all sorts new things all made possible by the children's enthusiasm and my angel Lill. Lill got me on the front of her sledge and took me down to the bonfire for lunch, I screamed as loud as I could and didn't fall off. Later two of the boys, who had no wish to return indoors, helped Lill show me how to make snow angels (see photo).
Back inside for a sitting-come-standing programme, we creatively built a bonfire, stuck plasticine sausages onto a baton and proceeded to show Stinky Stig what he had missed. He had been sleeping in the warmth of the centre and had missed all the fun. Lill and I got the blame for forgetting to wake him , he had therefore not been with us in the snow.
Thank you mums and dads for making the fun possible, hopefully we will get one more chance next week to enjoy the clear, crisp outside before we all make our separate ways home for Christmas.
Notes
No knives and forks
We are teaching the children to eat with a knife and fork. n Tuesday they turned up with a demonstration placard with a drawing of a plate and a knife and fork with a big cross through the middle. No chance boys, unless we are having grilled sausages out in the snow!
tusan takk (Norwegian) - thank you very much/ a thousand thanks
szalonnasutesnasütés (Hungarian) - grilling pig fat over a fire with garlic and eating it with bread.
snow angels
http://en.wikipedia.org/wiki/Snow_angel
Stinky Stig
http://konduktorin.blogspot.com/2008/11/name-that-dino-in-one-two-three-four.html
Posted by Susie Mallett at 21:21