“Bits in between” for conductors 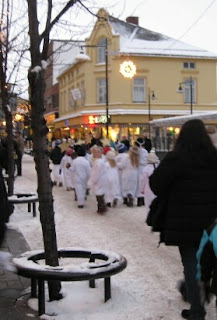 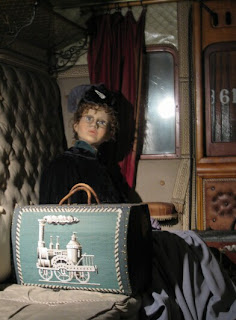 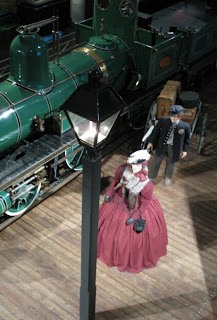 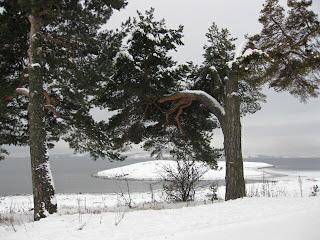 Some of the bits in between, 13th December 2008
Conductors need their “bits in between” too, especially after working for two weeks, ten hours each day, including Sunday!

I think I can quite honestly say that I have never in my life so wished for Friday to come, so that I could have a break from work. As a self-employed conductor I often work at the weekends too and I feel very lucky that I can go to work each day wanting to walk through the door and get on with it,

But this weekend I was glad of a day off, as I really needed some “bits in between” for myself. I needed to get out in the fresh air, get to know my surroundings in the daylight, get my bearings, see what Hamar looks like, learn a little bit about Norwegian life and for a few hours forget about en, tu, tre, fire, fem!

On Friday evening, when I was walking in the cold wind beside the lake with the mum of one of the Nice angels, I saw the old ruins that are covered with a glass pyramid. I have seen photographs taken of these ruins before the beautiful glass structure was erected over them, when they looked like any ruins anywhere in the world. Now, looking very much like the central construction in the Louvre, they have been turned into a work of art!
In the evening darkness, with candles burning along the snow-covered pathways, the light was amazing, reflecting off the glass, off the snow and off the water that could be heard lapping against the shore. There was a bitterly cold wind blowing, which dropped the actual temperature by several degrees. The flag on the green beside the house where I am living has been flying in the wind for several days now, and this makes a less pleasant type of coldness. No good for English skin, turning it into sand paper if I forget the moisturiser! It is reminiscent of the lazy east wind at home on the Norfolk coast, which instead of going round you blows straight through you.

I spent the rest of the evening walking through the fairy-tale streets of Hamar, enjoying the company of my new-found friend and learning a bit of Norwegian.
With the streets full of snow and dimly lit, my imagination was running wild. I expected to see Santa’s little helpers on their scooter-likesledges, hurrying about their business, rushing in and out of the narrow streets.
I think that this must be Christmas at its least commercial. In comparison to England and Germany, with all the hustle and bustle and crowded streets, Hamar was radiating the peace that Christmas is all about. Quiet streets, no bumping shoulders, lots of smiles and time for chatting on the corner.

On Saturday came the “bits in between” that I have been looking forward too since my arrival, actually since I was told about it in Hungary at the beginning of November.
Hamar has a wonderful railway museum, the Jernbanemuseum, and this was my destination on Saturday morning. I was kindly collected from “home” by a colleague and dropped off at the door of the musuem. Being winter and snowy and cold, the outdoor exhibits are not open but there was enough to keep me busy for a couple of hours before the return of the same lady and her most charming boys, who had invited me to lunch.
TLC
The exhibits are lovingly put together and I was transported back to bygone times and away from work, exactly what the doctor ordered. All the aches and pains and tiredness disappeared as I looked longingly at the suitcases embroidered with locos, saw the station clocks and luxurious railway carriages. This all reminded me that one day I will make that journey on the Orient Express.
I am also determined to return to Hamar to work one day, if only to take the boys from work to the railway museum in the summer when we can walk around outside and picnic by the lake.

While I waited for my lunch date, the other charming boys, to return from their Christmas shopping I had time to write a postcard to my Dad who is actually responsible for my fascination with trains. He was my childhood hero, as much for being a engine-driver as for being my dad. He drove steam, diesels and electrics, travelling for most of 49 years between Norwich and London.

I used to lovedbeing taken “down the loco”, to breath in the smells of trains, see the turntable and enjoy the general blackness and smokiness of the place. Dad’s old fireman’s uniform (cleaned of course) complete with flat cap with plastic cape at the back, was in our dressing up box. It was always a difficult choice for me, I could never decide between this and the 1920s velvet dresses that had belonged to my grandma and her sisters.
My sis usually went for Mum’s cream crepe wedding dress and I was more often than not to be seen as a British Rail fireman, with the dog dressed as a postman because he loved to wear the hat!
I could be describing our activities in the conductive group on Thursday, dressed up and singing carols!

Back to today’s “bits in between”. After relaxing with the trains and learning about traditional Norwegian Christmas over lunch, I ventured alone to the Christmas market, following the St. Lucia procession along the high street. The market is not at all like the German ones that I am used to. It is sell nothing but homemade articles, both food and craft-work. I had decided that I would buy my Christmas present here if I found anything thatI liked and needed. I found a lovely cerise and black alpaca shawl which is the warmest article of clothing I now own, apart from perhaps my New Zealand possum socks.
For many years I have made all the Christmas presents that I give to other people and thenbuy something for myself. This year I have given myself something to remind me of this happy time in Hamar.

The angel in each of us

December the 13th is St. Lucia day. I have known the song about her for most of my life but I am ashamed to say that I had no idea who St. Lucia was, until this week when I learnt about it from Ellen the “lady Friday” at the centre. She told me about the light procession, the St. Lucia bread and the concert to be given at the opening of the market. The children braved the cold and sang beautifully looking just like the angels Petö is said to have believed each of us have inside us. I would like to believe it too.

En, tu, tre, fire, fem – one, two, three, four, five.
NICE angels – my nick-name for the conductors I am working with who were trained at the National Institute for Conductive Education, Birmingham, UK.