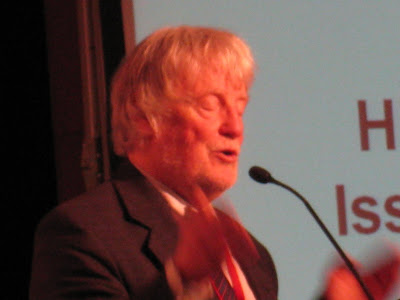 Over the last couple of days there has been a lively thread on my blog involving myself, Andrew Sutton and Anne Wittig, under the heading “More about Brains”:

This morning Andrew Sutton wrote again broadening the discussion yet further.
I decided to post his latest contribution here:

Apologies for coming back to you with a second long comment. Informed? No, puzzled and uncertain in these uncertain times, as I know many others to be.

Your Comment above set me off into a whole thread of thoughts – i.e. a sleepless night – connected or perhaps separate themes of which I pick out here but four: the 'brains question', 'independent practice', ' renewing training' and 'World Congresses'.

Apologies for appropriating your discussion space in this way but my own is currently appropriated by discussants on the specific matter of the conductor-training course at NICE. I welcome those who are using my own space for this and I do not wish to interrupt their flow. In the meantime, your Comments page offers a safe haven for more general conversation.

That was an extraordinary performance by Uta Frith. You are right, this sort of thing is taken very seriously in our society, by many people who ought to know better. Why do they go for it? It cannot be for either the quality of the presentation or for its substantive contribution to our understanding of the human condition. The answer must lie outside, within the ideology and needs of those who go along with this. Granting as I do, the wonders of the technology that permits such 'brain science', and the patience and sheer hard work of those engaged in it (etc.), I have to add that the issue here, as maybe always, is as much a social (and even political) one rather than a primarily substantively scientific matter.

One day presumably it will be common knowledge that today's neuro-emperors (and empresses) are very short of clothes, and people may look back with incredulity at the sort of things being said about 'brain sciences and education' – just like nowadays the popular imagination is amusedly aware of the sheer barminess of much of the medicine of yesteryear. In the meantime, hold on tight on the firm bridgehead of neuro-sanity that you have found in Germany, and take reassurance that there is a whole archipelago of such islands of medical sanity (and psychology) around the world. Eventually the fashion will change, again, and you will be nothing like as isolated.

Maybe the message will also get out that pedagogy and upbringing may have rather more to teach the neuro-folk.

I have read your point before on this site, both explicitly, as above, and evident implicitly in your vivid accounts of your work – that independent practice emancipates vital essences within the heritage of AP., permitting their generalisation and extension in ways not possible in what some people call 'traditional' CE settings.

In part of course, this may be freedom from the stifling effects of bureaucracy, management and professionalism to which CE practice can be as prone as is the practice of any other of the 'helping professions' – and this is in itself something that ought to be articulated more often, explicitly and publicly, as I know that is an implicit and private concern for many conductors (this perhaps relates to what I say about World Congresses below).

But I think that there is also something deeper here, something more dynamic. The world is changing faster and faster, institutions are tumbling, established idea and ways of doing things are being brushed aside, we are all having to do things differently (I am not of course just talking about CE here!). Institutionalised practice, institutionalised ways of doing things are by definition fixed, inflexible, and exceptionally hard to change. They may have no place (and no funding) in the new world, yet be insufficiently connected with outside reality even to learn new ways of doing things, never mind take leading roles in the process of change around them.

Independent practitioners can of course be as hidebound and died-in-the-wool as the grimmest bureaucracy. But at least independence may offer a wider potential for action and innovation. Your Conductor blog has taken an important lead in recounting aspects of your own independent practice and seeking to derive some generalisable points from this. A lead? The ultimate test for 'leadership' is whether there are followers. I know that there are others who try to follow your example privately, but I am pleased to note now that Anne Wittig and Lisa Gombinsky have come out of the closet and have joined you in recounting their independent practice and making their own public analyses.

Is this the way of the future for CE? Who knows? In the West perhaps this will be one important way. This too relates to World Congresses.

There is much in the news this week in the little world of Conductive Education – and there may be more so as the year progresses. There should be nothing new here, though, as underlying structural factors both within CE and without are no different than they were a week ago, or a year ago. The fate of existing training courses, wherever these might be and however venerable, is but a cork bobbing on an ocean of change.

CE bestrides a fault line between social-psychological (educational) and physiological (medical) understandings of the human condition – at least its rhetoric proclaims this and there are good theoretical grounds for thinking that here for once the rhetoric might reflect a reality. What a potentially exciting position to be in, how much might CE say to a much wider world (and I don't just mean to the world of rehabilitation!). And how edgy and uncomfortable, and even dangerous. Its practice (against which the actual content of training has ultimately to be referenced) is in a state of flux. The theoretical positions discernable in this practice are generally ill-stated and implausible, and if stated properly require rigorous and well substantiated defence in a variety of critical contexts. CE's financial-administrative base is, to say the least, shaky – and that was in the good years. For the future, the most optimistic analysis would regard CE’s funding as deeply problematic. New ways of practice, new independent bases, new sources of funding... All that is very exciting too – for some.

This is not to say that there will be no 'jobs for conductors', just that the bulk of these will not be the jobs that they trained for – or, to put it the other way round, training for conductors will have to be very different indeed, in ways that may not be clear for some time yet to come. In such a context, conductor-training courses' closing because of financial and structural change may be doing the right thing for the wrong reason.

But what is done is done. What might be proposed in its place? More of the same, or the required radical departure? And if the latter, what forms might such changes about, and how long will all this take?

Come to that, what is 'a conductor' anyway, and what is 'training?

Given that, if there is to be a World Congress in 2013,then this will be held in Germany, the cardinal question for attention there should surely be the one that Gabrielle Haug asked (in pre-KF days) when first trying to introduce this work into Germany – Was ist konduktive Pädagogik? There is still time to ask this question, before the wording shifts to Was war konduktive Pädagogik?

If this remains the superordinate question, then I would suggest the matters raised above to be important second-order questions: the 'brains question', 'independent practice', ' renewing training'.

On the other hand the next World Congress might aim for the mixture as before. If it can find sufficient ingredients.

Thank you Andrew for this. I welcome other comments, either here or on the More on Brains thread: