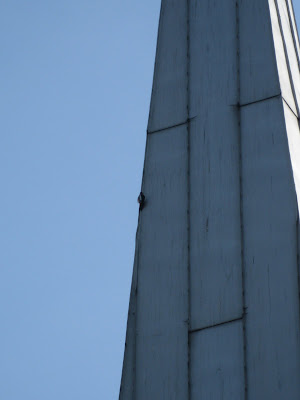 "A lesser-spotted woodpecker, not knocking on wood!" 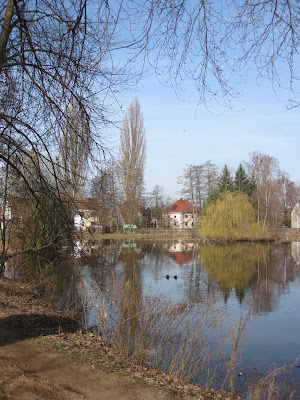 "Communing with nature at five past nine today"

The real healing of my soul

Spring really is in the air now, although on most mornings there is still ice on the sides of the duck pond and frost on the grass before the sun comes up with a touch of warmth.

I still find it hard to believe that I do not have to get to work an hour before the first group of the day in order to make all the preparations. Even after six months I still forget that there are two youngsters employed at the centre who get everything ready for us. It is just like old times, I just have to arrive in time to get into my whites, greet the group, have a sip of tea and get on with the very satisfying work with the adults' group. I still often set out too early, and that is why I had time for this soul-healing sit-down and a chat with nature.

I decided to sit myself down beside the duck pond with a cup of coffee for five minutes, it was nine o’clock and I was only two minutes from our centre. I called in at the baker’s and bought a coffee-to-go before taking a seat on a bench under the willow trees beside the village pond. There were quite a few people there, mostly young women walking back from the school or the Kindergarten, but there was still a bench free.

I sat sipping my coffee and soon realized that nature was communing with me. I could hear a lesser-spotted woodpecker hammering away. Although I knew almost for certain that it was a lesser-spotted woodpecker that I was listening to and searching the trees for without having it in my sights, something was not quite right. The rhythm of the beat was right but the sound was not that of a bird’s beak hitting wood. It sounded rather like this woodpecker was drilling for oil!

Actually it sounded like he was hitting his head against a brick wall and this thought popped into my head: "Just as many of us, conductors, sometimes feel like we are doing!"

I sipped coffee and I nibbled on my raisin bun that the mallards were eyeing longingly. There is a sign telling bench-sitters not to feed the ducks otherwise I would have let a crumb or two drop to the floor for them.

As I drank and nibbled I searched the trees for the black, white and red bird, but there were no trees in the direction of the sound and, as I have said the sound, was not woody anyway. All there was where the woodpecker should have been was the very modern tower of the church!

That tower is made out of metal.

And wait another minute

That lesser-spotted woodpecker’s pecking sounded a bit tinny to me.

And just one more minute

That tower stand in exactly the spot that the sound is coming from.

Then I spotted it

About two-thirds of the way up the tower there was my friend. He was tip, tip, tap, tap, tapping away on the metal surface of the church tower. He was trying his hardest to wake the whole neighbourhood and trying even harder to hammer a hole in the metal tower. Maybe he wanted to build a home near to heaven.

I just had time for a blurred photograph from a distance but as soon as I got near enough for a better shot the tapping ceased and my soul-healing friend of nature flew away into the sunny distance.

I still had time when I arrived at work to note down my story before doing the work that I love. I enjoyed every single minute of the work with my stroke group with its many soul healing moments for us all.