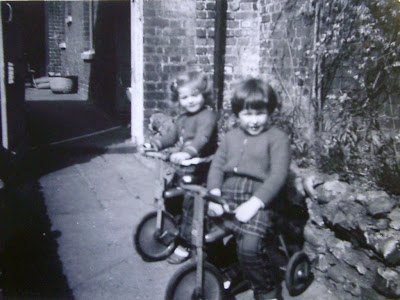 “So, first of all, let me assert my firm belief that the only thing we have to fear is fear itself”

I have been afraid to get on my bike. I put it away in the cellar in November 2010 and although I brought it out again two or three weeks ago I had still not ridden it. It remained locked up in the courtyard beneath my balcony.

What was I afraid of?

It was very cold still and I was full of aches and pains, so was I afraid of catching a chill? No, I do not think so. I have been healthy all winter while the children at work, and the staff, have been dropping like flies.

I have been extremely tired for months. A medical problem that has been sorted now was the fault of the tiredness so perhaps I was afraid that I may not concentrate and this would cause me to fall off. But I do not think that this fear would be enough to stop me riding my lovely bike.

I think that Franklin D. Roosevelt was right

Although I really have been afraid to jump on to my bike again this spring, with four long months being the longest that I have ever had for my winter break, it was this fear that I was afraid of most.

I do not really know why I was afraid to start cycling again but I had this strange feeling of not wanting to. I was so unsure of whether my body would have the energy to cope with the cold and the twenty kilometres-a-day round-trip but mostly I was full of fear.

I am unused to these feelings because I love my bike and I love to ride it. I love meeting the rabbits and the moles, the dragonflies and the horses – not to mention the fellow-cyclists who I know well enough to wave to. I love to notice how many traffic lights out of the ten that I ride through are on green and how many minutes that saves me on my journey.

I really like not having to wait for trams and I love breathing the fresh air instead of sitting in a hot steamy bus.

Despite loving all of this, and with part of me longing to be cycling again, I had a sense of foreboding. I just did not wish to ride and the actual fact that I had this fear was worrying me. I wondered too how long it would last but decided that it was all right for me to keep buying a monthly bus-pass until the moment came that my fear left me. I was determined not to feel guilty as well as afraid!

I notice sometimes the same thing happening with our clients, children and adults alike. They learn something and they enjoy doing it for a long time but suddenly not any more. I have usually thought that their will and the motivation have vanished - but why? Had it not been like this for me too with my bike? Perhaps our clients too are afraid for some reason and then become as I did afraid of being afraid.

I still do not know what I was really afraid of but I do know that the more I became afraid the more I worried about having this fear. Until that is on Monday morning, when I got up, got dressed in all the gear that I found in its usual place ready and waiting for me, and I hopped on the bike.

My motivation returned and I was off like a rocket!

All but two of the ten traffic lights were on green, which gave me a flying start to my cycling season.

It was good cycling weather and got better for the return trip when the sun with some warmth in it, even though it was late evening, accompanied me to my door.

I have no idea what re-motivated me at last to cycle to work again at last but now that I have broken that barrier of fear there is no stopping me, although this evening after a twelve-hour day both Évi and I hopped on the bus for a short part of the journey home, she with her roller blades and me with the bike. It was not through fear or laziness that we hopped on the passing bus, we were just exhausted.

Tomorrow I will be out there again with the rabbits and the moles, the planes and the pheasants, and much more besides, all of which I have described here before:

Having just re-read this posting that I wrote eighteen months ago I cannot believe that my bike stayed in the dark cellar for so many months. There is enough in that story to motivate me to keep on pedalling, at least until the next snow starts falling.

“So, first of all, let me assert my firm belief that the only thing we have to fear is fear itself” -