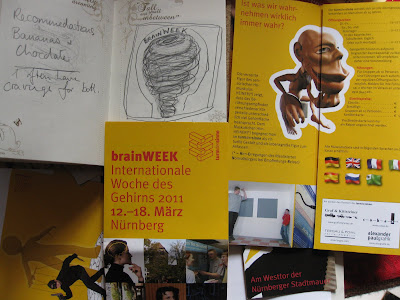 As part of the BrainWEEK programme for Saturday 12th March two films were to be shown at one of the smaller cinemas in Nürnberg. The film Shaken was as it turned out not shown, as it had been much too expensive for the cinema to acquire, not being readily available in Germany.

It was later decided that the other, a French film, Small World, would be screened twice.

Germans really are so efficient

I had tried to book tickets for the film evening unsuccessfully in the Internet. In the end I had left a phone message at the ticket office to reserve a cinema seat. I learnt at the afternoon session that the 19.00 film showing was fully booked so I phoned immediately to book one for the later showing. When I reached home with just enough time for a cup of tea before setting off again, I listened to an answer phone message telling me that I definitely had a booking for 21.30. In the confusion of booking I had not even left my phone number but it worked anyway!

So, with plenty of time to get lost if necessary, off I went in search of this small, arty cinema in a back-street in the south of the city. Once there I could discover what was in store for me next.

I have been to Casablanca once before, a long time ago. It was after the first visit that I painted the “Take three girls” picture seen on a very early posting:

It is a lovely place, really arty; it suits me down to the ground. I really do not know why I have not visited more often. The pancake house next door is renowned locally. It was one of the first places I heard about when I moved here but have never been inside! It was the place to be seen when Germans of my generation were teenagers. They still rave about the pancakes of their youth! Few of them go back, in fear of disappointment I think.

The bar of the Casablanca is in the depths of the cinema, behind the biggest screening-room and with a spiral staircase in the corner leading up to the smaller screening-room. Painted red and black with mirrored doors and a ticket office desk at the end it has at the same time an airy but cosy feel to it. But that feeling changes after the in-between-film times. When the doors open and the audiences flow out it becomes cramped and hot but still at the same time retaining its interesting appeal. There is a semi-closed courtyard (for the smokers and summer evenings) to accommodate the crowds when it just gets too much!

I was having quite a good BrainWEEK experience even before the film started, doing my best to feel well in the crowded bar with my glass of Merlot to sip at.

I noticed that three of the best speakers of the afternoon's session where there to kick the evening off and talk a little bit about the film before it started. They were really enjoying this occasion and their enthusiasm rubbed off some more.

The film Small World is an adaption of a novel by Martin Suter. It tells the story of how a sixty-year-old man, step by step sinks deeper into the small and restricted world of Alzheimer’s disease. The doctors in their introductory talk recommended that we read the book if we wish to find out more about the treatments and therapies available for Alzheimer patients.

Watching the film on my own, without a friend to chat to on the way home was probably not ideal but it was nevertheless well worth all the phone calls to get a ticket.

While watching the film I entered for two long hours the confused world of Konrad Lang who we follow though the stages of Alzheimer’s disease.

It is the first stages of this disabling disease that were so upsetting to this man and his family. I expect that it affects many people in a similar situation in the same way too. The forgetfulness, the not knowing where one is or how to get home, the sudden realisations that something is not quite right with the world, are all symptoms that can all be so frightening for all concerned as they gradually creep up on them.

In the film we saw how, once the diagnosis had been made, some family members were able to then get on and make life comfortable for the victim and others found it incredibly difficult to face the fact that a loved one no longer recognised them.

All these and more are the problems that the specialists at clinic in the Nürnberg hospital face together with their clients and their families. Giving these clients a caring environment to live in surrounded by loved ones for as long as possible, is important. The support of a knowledgeable medical and therapy team is just as important.

The doctors giving the introductory talk told us of their hopes that this film will have a huge impact on the knowledge that the general public have about Alzheimer’s and dementia. What is more they hope that the government will also sit up and take notice of a problem that is definitely not going to go away. It is a growing concern and there are well over one-and-a-half- million people in Germany diagnosed with Alzheimer’s. With our aging population this number will grow very fast.

The team in Nürnberg have done a good job in BrainWEEK of promoting their work they have developed in their clinic and bringing more awareness to this growing problem I n our society.

There are more occasions during the following week to be “brainy” but unfortunately all tickets are sold out. I will be at the box-office on Thursday and Friday evening with fingers crossed for returns.