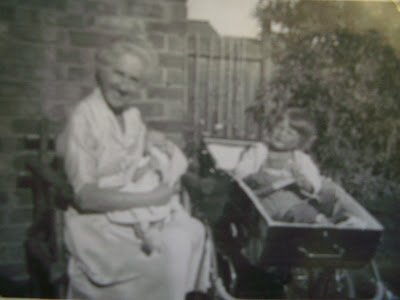 My great-auntie Winifred, me and big Sis, July 1957
I have just got round to reading Andrew Sutton's blog on one "paraprofessional" per child in groups in America:
http://www.conductive-world.info/2009/12/conductors-and-others-in-group.html
I remember asking someone about this when I first saw photos in the Internet of children in rows with an adult very close beside each one.
I enquired whether this might be the case because of insurance reasons but the person I asked did not know. It will be interesting to hear what people in America can tell us about this and how this works.
It interests me especially to hear how different this situation is to a parent and child group where there are usually, as well as the parents, several conductors working together.
It is no wonder that the Americans, and others, often describe Conductive Education as "hands on" and "one to one". If they see or experience such a group as described in Andrew's posting they probably think all the paragliders are aeroplanes!
More comments
While I am on the subject I am going to take the liberty of publishing here an answer to Norman's comment, or rather his question, on the same posting.
I jotted down some sort of an answers and comments of my own all over an old envelope as I drank my getting-home-from-work cup of tea and it just got longer and longer. Too long to be called a comment anymore!
Yes Norman, trainees did work in the group along side conductors at the Petö Institute, in fact for some twenty-four hours on four days a week. the fifth day set aside for school.
The trainees did not only work along side the conductors but they were actively taught by them. We students were instructed almost all of the time that we were in the group with the children and often taken out of the group to the office when more detailed explainations were needed.
We were told to watch such-an-such going on over here or to observe so-and-so working with a small group over there. We had our hands held as we touched children and held conductors hands as they touched children. We worked and we learnt and were shown how to learn.
In the four years I spent at the PAI I did not work with anyone who was not a conductor or a trainee conductor, but that doesn't mean there weren't any others, the Petö Institute is a huge place.
I think there is very big difference in being a conductor teaching trainee-conductors in a practical situation to being a lone conductor with many carers, paraprofessionals, or assistants working along side the children in a group.
It makes for a completely different atmosphere and working environment when there are three conductors and six student conductors, all at different stages of their training, in a group with twenty four children than when there is a lone conductor in a group with eight children and eight carers.
I have been lucky to have had two experiences of having a trainee conductor working alongside me during my career as a conductor. These were both very short but very enjoyable occasions. That is the situation in which I learnt about Conductive Education, as a student in a team. It is very different for me to working solely with qualified conductors. In a teaching situation I had to to think differently, act differently and work differently.
I have also been in several situations where I have had worked in teams of conductors but also with young men doing their National Service working alongside us and withyoung girls who were working to fill a gap year before Uni. In some of these instances I wouldn't describe myself as being lucky like I did about having the student conductor working in my team. sometimes we would have described it as almost a mission impossible!
Did you ever visit a group at the Petö Institute when all the students were on holiday?
I used to sometimes, just to say hello, to help out a little, read stories, or play with the children. Once I even went with them on boat trips up the Danube.
At these times I observed a very different atmosphere. It was very calm, the hustle and bustle wasn't there. The conductors, three or four working together at any one time, loved this relaxed atmosphere of their team, but at the same time they also looked forward to the return of their students.
In these student-holiday times the conductors had a break from teaching. In fact they worked as some of us work all the time. With their experienced conductor colleagues in a well oiled team!
Posted by Susie Mallett at 20:34