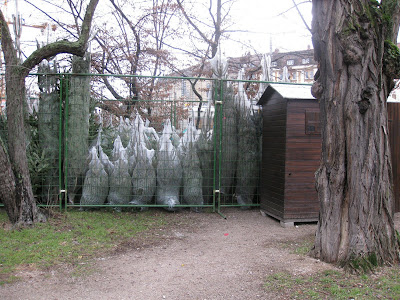 To get to the trees and back... 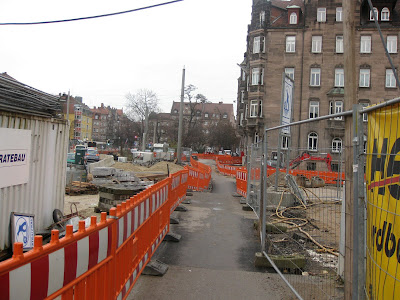 I treked through all of this! 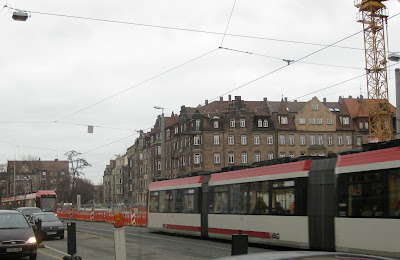 The place that I had to get to is to the right of the driver's window of the left-hand tram!
Tingling cheeks
Last evening as I walked home from the tram it really did smell like it was going to snow. Don’t ask me what snow smells like, I can’t explain it. Perhaps it isn’t a smell at all but another of my senses that feels the approach of the fluffy white stuff. Whatever it is it feels like I smell it!
A has friend told me that he likes the smell of first snow too, so I am not the only one who thinks that it has a smell!

All those who have smelt snow approaching will know what I mean.

I thought that the very fine rain that started just before I reached my flat last night was more tingly on my checks than rain should be but, even after three or four checks of my black wool coat for signs of whiteness, it really was only fine rain, allbeit very cold rain that then turned into quite a heavy shower during the night.

Still dreaming of a white Advent

I was on the phone this morning talking to an eight-year-old young lady who can sometimes be a bit of a tease. She suddenly told me right out of the blue that it had snowed there at their house last night. She was all of ten miles away from me. She said that there was enough if you collected it all together to make a small snowman! I was not sure whather I could believe her.

I asked wheher she was teasing me but at exactly the same time as I asked my question a car from the same town as she lives in parked up outside my flat. Guess what it was covered in. Yes, you got it – snow.

Winter is here, arriving just in time for the third Sunday of Advent.

At lunch-time I went shopping and decided that after I had done the essentials, including buying cough medicine from the chemist’s shop, it would perhaps be a good idea to choose a Christmas tree while I had time this weekend, before the rush of next week. The idea of snow arriving had put the idea into my head.

As I walked through the building site that at the moment surrounds the nearest outdoor Christmas-tree selling-point, the snow really did start to fall. Snow in the middle of Nürnberg is a rare occurrence and although today’s was not much, certainly not even enough for a table-top snowman, it was white and it felt lovely, really tingly on my tongue and cheeks.

When it snows a little harder I will take my glasses off as I always do, so I can feel it in my eyelashes too, a la Julie Andrews.

I had decided to get a bigger tree this year as, with such high ceilings in my hundred-year-old flat, it seems such a waste of space not to. The only problem would be that the larger they get the heavier they get too, so how would I get it home? Although I only live two blocks away from the selling point I struggled last year just with the metre-high tree that I hadbought.

Nothing is a problem in Advent, especially in Johannis!

The young lady selling the trees asked whether I needed any help with my choice. I explained to her that I have high ceilings but smallish rooms so tall and narrow would be ideal, and one that kept its needles for ages. The one that I had last year didn’t loose its needle for over a month, so I was looking for the same sort. The lady found just the one but I said I couldn’t take it as I couldn’t even lift it, let alone carry it. “No problem,” she promptly replied “my husband will walk it home with you”.

Hubby didn’t only walk home with me, he said that if I fetched the Christmas-tree stand first he would chop the stem to fit. So home I went, hunted out the stand, cleared the space for the tree and returned to collect the already chopped-to-size tree. It was then fitted in the stand, positioned so that the fairy wouldn’t look wonky on the top. Home I trotted, proud owner of a Christmas tree. Not only did hubby carry the tree home for me, he settled it in the corner of my living room, complete with stand.
It looks perfect. It is the nicest one that I have had since we chopped one ourselves for my first-ever Christmas in Germany, in 1993. That year I decorated it with red bows and real apples, this year it will have all the childhood memories hanging on it that I have brought with me from Norwich.

It is a bit early and I won’t be decorating it until next weekend, but it is nice to have it there smelling sweet and earthy and making the living-room look cosy.

PS
The Baustelle, building site, is there because of the new underground extension stretching out to the north of the city.This work has been in progress for three years now. I asked the Christmas-tree seller how it effects sales. Apparently it reduces them by a third. By next Christmas the cranes and diggers will be gone. I do hope the Christmas-tree seller will be able to afford to return.
Notes
Unfortunately due to copyright I cannot give a Youtube link for Julie Andrews and her "My Favourite Things". I am sure most of you know the song and were able to hum along while reading.
PPS
How about this for service, it is just as good as the Christmas-tree man!
This posting not quite finished off properly, that last sentence in NOTES still hot off the press when these links below arrived in my inbox. Thanks Becky!
http://www.popmodal.com/video/934/The-Sound-of-Music-My-Favorite-Things
http://www.celebritywonder.com/vids/Julie_Andrews/LK6iPfpN6XI.html
Posted by Susie Mallett at 22:50

Snow does smell yes, and so does rain, I love the smell of wet earth when it is raining.