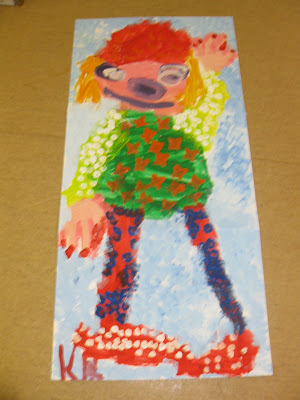 It was so quiet in the streets and on the trams, both in the morning and evening, and it wasn’t because of snow, there isn’t any!

My work for Monday was cancelled at the last minute so I got a third day off, not counting the weekend. I made good use of it and played with my toys under the Christmas tree.

I really did get toys, or rather “things to do”. Things to cut out and stick!

I busied myself making a warehouse with a lift-shaft and a loading bay, to add to my N-gauge model-railway layout. It isn’t actually a proper layout yet but it is laying-about on the coffee table. I quite like it that way especially since it has its new warehouse, soon to be joined by more Christmas “things to do”, additions of a dairy, a fire station and a mill. This will mean that, as well as the addition of several buildings, there will also be two more very tall brick chimneys, a passion of mine!

And today it was back to work so the fire station and its chimney will just have to wait till the weekend, and another bank holiday.

It is Tuesday
That’s the long, three-shift, two-hat day. My favourite day of the week at work.

Through illness, the sudden death of a parent and Christmas, it also turned out to be an unusual three-individual-sessions day. This made it special for everyone, while I enjoyed my clients and had a less hectic Tuesday, the clients got more attention and enjoyed the time to talk.

I am pleased that my clients wish to work with me between Christmas and New Year. They and their carers and parents are very pleased that somewhere is still open. Many physiotherapists, occupational therapists, riding therapists, speech therapist, workshops etc. are closed for the whole of the school holiday. The children are quite possibly away on holiday but what about the adults? It is the same old question every year at this time.

The school holidays go on until after the final bank holiday, Epiphany, the day when the Three Wise Men come knocking on the door collecting money for charities in foreign lands.

After school starts again on January 7th I plan to take a short break!

It is amazing the difference that not going to school or work makes for some clients, what a difference the celebrations of Christmas and parties makes for others, and what a long sleepy weekend does for a conductor.

I really enjoyed my work today

For the first time in ages I didn’t cough and I didn’t feel tired. I even felt quite bouncy.

It wasn’t all easy, although the first session was exceptionally good.

I began the day with an individual session with a twenty-one-year-old young man who had had a few days holiday from his work. He usually comes to me late on a Friday afternoon. It made all the difference in the world to start early this morning and, with already five days' holiday behind him, lots of progress was made. He suddenly did things that we have been practising for weeks, as if he has done them all his life!

After this session I had a break which gave me time to tidy up the arty-crafty left-overs from the Christmas festivities, to take down the advent deco and also to write a posting for my blog.

Then came the difficult bit

In some ways as well as difficult it was the best bit, as it was also a great success.

My conductor's hat was swapped for the art-therapist's overalls. Or could it be the case that I keep the hat on and just add the overalls?
What ever it is that I do with my hats doesn't matter. Today's art-therapy session was hard work and also a lot of fun. The creative result can be seen in the photograph at top of the posting.

My client always knows what it is that he wants to paint, I don’t have to worry about preparing anything for him any longer, I just have to think on my feet how to assist him in his creativity!
He arrives each week with a stuffed toy, or a pottery gnome, or some such oddity tucked under his arm. More often tha not this creature is accompanying him because it has been decided that this is to be the subject of the day’s work of art.

A while back my client arrived with a huge stuffed, fluffy cactus under his arm! We painted a huge two dimensional cactus about four feet high. His family still hope that one day this painting will take the place of the even bigger 3D object in their home.

Today tucked under the arm were two wooden clowns, in sizes medium and extra large! They have actually been to visit me before and a small painting of one of them was hung at the exhibition in September. This time we planned a life-size clown painting to hang on the bedroom door.

Who knows, perhaps the wooden clowns, old and chipped and dilapidated, will be confined to the cellar alongside the fluffy cactus for a few months.

A change of routine

Christmas with all its coming and goings can be difficult for many of us who are used to a routine in their lives. This afternoon’s client, like me, is one of them.

I spent three days at home and the same three evenings with friends. I enjoyed the company but the last evening, as well as being enjoyable, was noisy with its games and laughter. I was quite exhausted after it and very much enjoyed the fourth and fifth days on my own!

I think my afternoon client was tired out by Christmas and at the same time very excited by it. He needed lots of rests but also lots of attention. He needed changes in activities in the in-between times and a few breaths of fresh air that kept him going enough to finish the huge project he had taken on. As he was determined to take the work of art home with him today, we had to get on with it. We only had two hours.

The work got completed and with a little help from the hairdryer we were able to get it rolled up sothat it would fit on the back seat of the car. With the rolled-up clown under his arm and the wooden ones staying with me for the week, he went home calm and happy.

Phew, and then not even time for a change of hat. I just took off my overalls!

Shift three
This always has been the highlight of my week, my adults' cerebral palsy, after-work group. It is in this group that I learn so much about life.

I have been working with the one lady, the only one who made it this evening, for about twelve years. She went to the Petö Institute several times when she was in her early twenties, always accompanied by her mother. They were both thrilled with Budapest and Conductive Education but it became increasingly difficult for them to leave the rest of their family at home. It was then that they discovered me.

This evening group has grown up around us both but today it was just the two of us again and we really made the most of it.

It was rather sad at the same time as one group member wasn’t there because his father had died quite suddenly over Christmas. We all knew this lovely man well, he was always so kind to us all. We talked about him this evening and also about how we hope that the group will be able to help our valued group member during his time of mourning.

We listened as we worked to some of my favourite English Christmas carols and I was pleasantly surprised when my client began singing along with me. This cheered our way to the end of the session when we played memory before dressing to face the elements.

The snow of this afternoon had turned to freezing rain and a bitter wind as I made my way to the bus and tram. I may have enjoyed the walk more if the path had been white but I was warm and smiling inside anyway.

My many hats had made for a very satisfying day’s work while the rest of the world seemed to sleep.
Posted by Susie Mallett at 23:32