One day those terrible teenage years are all over 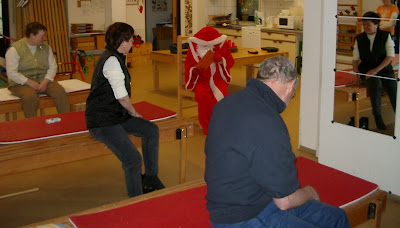 Carefully-does-it, softly-softly or battle-on-through. There are many different ways that families experience and live through the teenage years of their children, disabled or not.

Over the years I have seen many children with disabilities become teenagers, a few I have also accompanied on their way through to adulthood. I have described my experiences with several of them here on my blog in different postings. For each of them the road through the difficult teenage years to adulthood has been a different one.

One client gave up attending conductive groups at the age of fourteen. Then she returned as an adult aged twenty-three when she realized that she needed to do something to keep active, and her path led her back to my evening workers group.

Another young man worked with me continuously from the age of seven right through to adulthood, and the work continues. He recently told me how pleased he is that he did not give up. He is an inspiration to me I have learnt so much from him over the past twelve years.

Some children had to stop attending conductive groups due to moving from the local school to a boarding school where no CE was available. For others it was just the rebelliousness of adolescence that caused them to stop. They simply said: No I am not doing it any more.

One of my clients came to me and conductive education only as a teenager, she was fifteen and was looking for someone to work with to learn to walk again after a hip operation. We worked hard through those teenage years, with great success. She is now abroad studying for her doctorate and is a real convert to conductive upbringing, spreading the word throughout her travels. I hear from her when she needs tips to cure her aches and pains, otherwise she goes it alone. At the moment studying in Iceland. Studying means lots of sitting at computers which really is not good for our clients with cerebral palsy.

This one client has organized her own physio-therapy and CE from an early age, to fit into her routine of grammar school and university. It was easier to do-it-herself than for her mum to do it for her. Appointments could be arranged to fit more easily into the busy programme. It also avoided fights with mum. So it has continued into adulthood, finding whatever she needs whenever she needs it, wherever she is. Sometimes this is even Conductive Education.

She has the Nordic-walking sticks that I sent her, that help her to tramp through the Scandinavian winters. She swims and exercises as much as her studies and stamina allow, and I am always at the end of a cyberspace line to lend a hand when needed.

There are so many clients whom I met as littlies, whom I have then worked with through kindergarten and school days, then on to university or work. Together, learning to swim, ski, ride bikes and scooters and gocarts. Learning to walk, run, skip and jump. Learning reading, writing and arithmetic.

They all got through those teenage years.

They all got through somehow, with family and conductor rallying round.

One who is now nineteen didn’t give up, that was his motto. He had his painting as his motivation, and conductive upbringing was and is his way of life. He has beeen very tough on himself, he has learnt to have high expectations. He prevented the need for an operation on his legs by wearing night splints for several years. He walked as much as he could, despite being collected by taxi for school and taken to all other appointments by car since he was five years old. He was treated no differently to his siblings, they fought and made up and all came through at the other end.

Another went to gymnasium and after the age of fifteen she had no more time to do long conductive blocks as well as having the holidays that she needed to relax in. With her mother we always devised thirty-minute programmes for them to do two or three times each day. Her mother kept contact with me and I have followed this client's progress and given advice in many situations.

It was such a contact that has prompted this posting. It concerned the same client who I had news about this time last year when I was in Norway and heard that she had passed her driving test. This week I am told of the success with which she has started university. She is studying to be a psychologist. She lives with other students in a shared house and eats her meals in the university canteen. I am told that she has discovered that studying at university means even more sitting and learning, and finding a physiotherapist became a must. For the first time ever she set about finding one for herself and has also found a fitness centre just around the corner from where she lives. We are all so pleased with what she has achieved especially as she was one of the clients who did not really take responsibility for her physical well being as a teenager. She left it to mum and even though she rebelled a bit she usually eventually complied.

So we have the young man who is now at work who never gave up, we have the young woman who gave up and returned as an adult, there is the teenager who discovered CE for herself and never looked back, and now I have news of the student who battled through her teenage years with the love and understanding of her family and a conductive upbringing, and is now living away from home, studying, organizing everything for herself and is also driving a car!

Now is the beginning of the new struggles for these “children”, the realities of the big wide world of grown ups that is theirs to conquer. Of course the back-up system is still there, families to return home to, friends to turn to and a conductor at the end of the phone, or the computer with email, Twitter or Face-book for client or parents to consult or just chat with and report back to.

Technology, I hope, will make the path through adulthood a bit smoother for these clients, with easy access to the back-up team and also to worlds further away.