It works, it's long term. 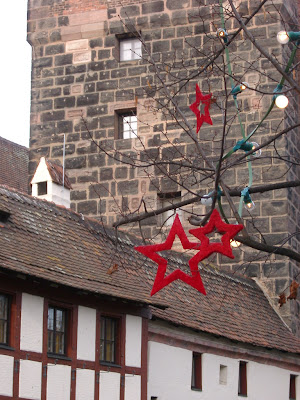 Avent in Nürnberg, beside the Pegnitz, 2008
Now it is time for a bit about my work

For the past couple of weeks I have been working in the afternoons with the older schoolchildren. These are "Petö children" through and through, from mother-and-child groups, kindergarten groups and young schoolchildren's groups. They eventually formed the Tagesstätte group, this is where children go after school until Mum gets home from work.
They are still the Tagesstätte group but for the past eighteen months it is no longer at the Conductive Education centre in Nürnberg. It is no longer run by conductors but it is still as conductive as it can be in the circumstances. The parents and the after-school care centre that is run by the city of Nürnberg school authorities have received funding, however, for two four-week blocks in each school year, enough money for two conductors to work alongside the young women who now run the group.

We are now into the third week of the third session and, as always, my colleague and I are wondering whether we are really doing enough for the teenagers in the short time that we see them. It is sometimes so hard to motivate them and, when we arrive full of ideas, we are often met with long, tired faces of young people who just want to listen to music on their I-pods after homework is finished. But somehow we manage to win them over, which is lovely to experience.

I am there for two hours on three afternoons a week, and my colleague for three hours four times a week. We really do look at each other in despair when we wonder what it is possible to achieve in this short time. We are always pleasantly surprised, though, most of all by the enthusiasm of the two young women now running the group who are so interested and eager to learn as much as they can in the short time we are there. There are also the children who anticipate our pending visit with such joy that they have the dates written in their school calendars in red ink!

These are the children who love to go home to tell Mum that they have aching muscles because of working so hard after they have rolled around on the floor, climbed over plinths, jumped over boxes and even used the neighbouring school gym to climb wall bars and run races.

The short sessions, just a couple of times each year somehow work for everyone involved. We are of course there to be called upon in the in-between times too. My colleague has been to the school several times and has spoken to the group leaders of all the afternoon groups about our work. We receive calls for advice from the leaders of our group, with requests for help with shoes, rolators and wheelchairs, with new ideas for seating and walking techniques for the children as they grow out of the old ones.

This work is successful because it is long term and because it is team work. These children have had conductive input in their lives for many years now. The longest probably has had ten years experience since, as a three-year-old, she was learning to walk in the mother-and-child group. All the others have been attending the conductive after-school care group since it began seven years ago.

This afternoon group is not a “Petö” session where a plinth programme is done and a standing and a walking programme take place. It is conductive upbringing. This is a group where clothes are changed, lunch is eaten, tables are set and cleared, where the dishwasher is loaded and unloaded. Where hands are washed and teeth are cleaned, where homework has to be done and in the summer the playground is used. In winter Christmas biscuits, homemade presents and decorations are made and the Christmas market is visited.

All of this is done conductively, even in the time when we are not there. In the time that we are there we do whatever we think is needed as a team to make life easier for these children, we swap the seating, we haveeven been known to swap a table for a plinth. We introduce games that can be done around the table to stretch arms and fingers, before, during and after eating and homework and craft activities.

We discover the best ways to walk between the rooms, we learn to put on the new, thick winter boots, we order new equipment, we organise meetings with parents and physiotherapists. We realise that it really does work and it is still very necessary for the continued conductive upbringing of these children.

What don’t we do?

Well for a start we don’t get time for an awful lot of "counting", in fact in the four weeks we are there we almost manage to forget how to count up to five!

And always when my colleague and I meet on the last day of the block for a coffee in our local café, we realise "Yes it was worth it. Yes, with the help of the team we have achieved more than we thought possible.

Let's hope that the funding continues.
Posted by Susie Mallett at 22:14