Now that's what I call progress. 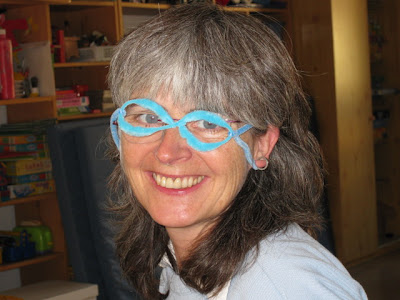 "Having fun yesterday"
From Yogi to Schogi, and from green to grün
All that progress in the space of a few days. Wahnsinn! Incredible!
First thing this morning my colleague commented on something that I had first noticed yesterday when I delivered one of our littlies back to the Kindergarten for lunch:

I am no longer Yogi.

I now get a Sch... at the beginning of my name. I find this just a little bit sad really, as the other children have got used to me being "Yogi" and so have I, but that's progress for you!

We are always having to adapt to change and that means me too. Now I have to start recognising my new name when I am called.
This will be as difficult as responding to Frau Mallett, a name that even after all these years I still do not respond to so that I wonder who the lady being called can be.

This morning, a couple of hours later, came the next development.

It was the same little boy and he appeared to have been answering me in English this week when I was asking him about colours. He pronounced grün as 'green', more with a Scottish accent than a Norfolk one.
Today he suddenly looked me straight in the eyes pushed his lips forward as if to give me a kiss and said grün! We all cheered and clapped. That of course delighted him so much that he said it again, and again, and again, and........ we clapped and cheered, and clapped and cheered!

Now I suppose thatI will have to find someone else to speak English with.

It is snippets like this that make me love my work. We had so much fun today, in our five different languages.
PS
I was just wondering whether it possible to use ICF to measure the ability to have fun.
Posted by Susie Mallett at 19:22