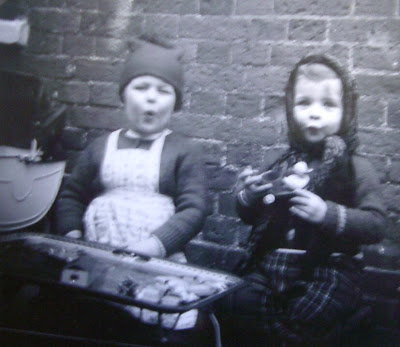 I have had a muddled week. On getting back to work I discovered there were lots of children and staff missing through illness, or on a go-slow of "One, two, cough, sneeze, sniffle".

There have been lots of half-filled groups and days but next week, if I fight off the coughs and sniffles myself, then we should be in full swing again.

What is so enjoyable about my return is not only that, despite the coughs and colds, there is new and interesting work on the go again, but also that the "bits-in-between for conductors" are reappearing.

Despite knowing that I would not know a soul I went, as much for the adventure of an hour's bus ride through the autumn countryside to the back of beyond, as for the party itself. As it was a few days before the frost and the snow was making nature look grey and a bit miserable, but the splendour of the autumn colours in the late evening sunshine made the trip worthwhile.

And now a jolly treat

On Tuesday (that was the "somewhere over the rainbow” evening) two of the members of our lovely evening group were, surprisingly for us all collected, by their mothers.

Apart from the fact that they all like to meet each now and again the real reason that they had come was to offer me a ticket for this month's Wiener Klassik concert.

One of them was unable to go and knowing how much I would enjoy it they wanted me to have the spare ticket. It was the same family offering me this treat as had takenk me too see Nürnberg FC play football.

I was thrilled, and so glad that I was free on Thursday evening.

Always when I receive these treats another extra treat always accompanies it. And this time was no different, asI was collected from the doorstep by car. This meant I could wear wha ever I liked and did not have the need to put on all the layers that I would have normally done to trudge through the snow to the tram stop.

So I dressed myself up to the nines, just like when I used to go with my eighty-six-year-old friend to the Opera. It was lovely to be going out dressed like that again

It is the Weiner Klassik concert season once more. These eight onc- monthly concert are held at Nürnberg’s Meistersingerhalle.

I have been to several of these concerts and I knew that I would probably be one of the youngest present, and I knew too that the audience are always very critical and tend not to like anything unknown or a bit modern! They also look lso very conservation. in their black-and-sparkles style of dressing, which I had done my best to compete with with my art-studenty style of dress.

The nicest music that I have ever heard

The concert was gorgeous.

My treat began with Mozart’s Marriage of Figaro, a well-known and muc-loved piece.

The programme then continued with the “feared” modern piece, which turned out to be the biggest treat of the evening, with the soloist and conductor having to return to the stage to take their enormous applause six times. This was the Spanish Symphony in D minor by a man called Lalo, with the violinist Tianwa Yang playing the solo exquisitely.

Most of the well-versed audience confessed to never having heard of him. I hadn’t either but now I am a big fan. During Lalo’s symphony I fell into a world of my own. I can image that my neighbours thought I was asleep. I wasn’t, I was in my fantasy world of dancers, woodland scenes, snowflakes and falling leaves. Each new note making the images more vivid. I was only brought back to the present when the clapping stopped and the lights went up

The interval was spent promenading with the crowds. It was just like being on the prom at Great Yarmouth, or in a Central European square on a summer evening.

To end the programme there was Beethoven’s Symphony No. 5. It was good but I think I was not the only one in the Meistersingerhalle who still had Lalo’s music ringing in the ears.

What else could it be than a piece from Wagner’s The Meistersingers. from Nürnberg? This of course brought another huge applause at the end of a relaxing evening.

Treats-in-between such as this one are-extra special. I love to go out to classic and rock concerts with my clients, to share their enthusiasm for the music of their choice and to be a part of the over-all "family upbringing".

"somewhere over the rainbow” refers to this posting of mine -