Multi-kulti and no tears 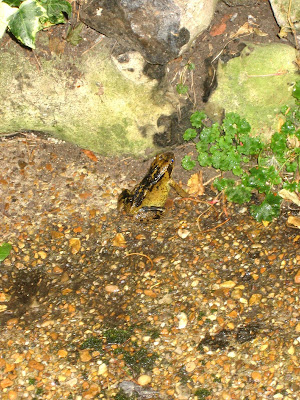 "A warm October day, last week" 2009 by Susie Mallett
Our new Kindergarten group started today
The children have had long enough now to settle in to their new environmment in our integrated Montessori - conductive Kindergarten to be able to come to yet another new environment without too many difficulties.

One of the difficulites of the past few weeks for these littlies was tears of which today there were none at all to be seen!

We were thrilled at lunch time when we rejoined the rest of the Kindergarten and one of the teachers immediately asked us what we had done to the children. Apparently they were changed beyond recognition. Bright and perky, very attentive, chatting and even eating!

Chatting is perhaps a bit of an exageration but we did very well considering that there is only one German in the group. This is the little boy who calls me Yogi. I think I explained in a previous blog posting that he says this because he has difficulties pronouncing the letter S. The S is replaced with a different letter each time he uses it, although funnily enough I am always Yogi. It is not any easier to understand his German that it is to understand mine!

Apart from him there were conductors from Hungary and England and children from Greece and Turkey.

I don't think that beats our nationality and language record. Once we had a German, a Hungarian and an English conductor, an American/German National Service helper, a Russian volunteer, one English and one Polish, one Greek and three German clients.

Today however in comparison to the record-breaking language-day when we all spoke German, we had two children that until joining the kindergarten hadn't spoken German before at all.

Our little German Yogi-Bear was able to show them all the tricks of the trade as it is now his second term with us.

And of course there was me! The English conductor who has been away too long and who keeps getting muddled up. I even started off in Hungarian today, which at least one of the gang understood!

A great time was had by all.

We were very hesitant about starting our group. I believe it is the first time ever in fourteen years of Conductive Education in Nürnberg that we have had no children in a group with cerebral palsy.

It is also the first time I or my colleague been "in charge" of the real littlie's group so we are shaing it!

As I wrote above the teachers in the Kindergarten were singing our praises after the first day so that gave us the start we needed and all the children want to come back on Monday!

So no more worries, just a lot of fun to come.

what a lovely thing to read! good work by all.

It is nice to meet you here Jules.

I am looking forward to the following weeks and hope to be able to report on our fun and games and any other developments in this new littlies group on my blog.

I look forward to reading more about this kindergarten group. Sounds like tons of fun!