Variety, the spice of life 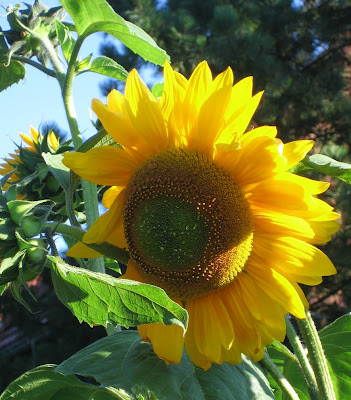 As a student-conductor I learned gradually how to prepare a daily routine for a group of twenty-five children or adults. Obviously, this was not the first time I had made such "lesson plans" as I had been working as a teacher before I went to the Petö Institute.

I had also had experience of writing work-plans for myself f preparing of four-course meals, when learning cookery and nutrition at school. Every detail that I wrote would always be double-checked by the examiner before the exam took place, and on the day too to see whether it actually worked. Everything down to the time taken to peel a potato and washing up between preparing different courses was checked to see whether the whole thing really did end up as the intended meal and tidy work place.

Despite these experiences it was still a difficult learning process at the PAI. especially as in the first weeks when I could not understand a word that was being said in the group. I had yet to learn the language!

Perhaps this was to my advantage, and the more I consider it the more I am certain that it was.

I realised that I could work with a child without using of words. I worked in the same way in my first months in Germany when I had little idea of the German language. I did however by then have wider knowledge of Conductive Pedagogy, which helped to some extent!

As a student-conductor I was not devising programmes for twenty-five from day one but in the first weeks in my first group I was working alone for an hour each day with four English children in the spina bifida group: making up games and activities appropriate for their stage of development. Yes, I suppose that I was thrown in at the deep end because I could speak English! At that time very few Hungarians could. This was before the explosion of language schools opening in Budapest, and Russian was still the foreign language “learnt” by pupils at school (and at the Petö Institute).

It was an hour of freedom from trying quite impossibly to make head or tail of what was going on around me. I was allowed to work in English. No one ever said to me what I should say, I knew only that I had to find the right words so that the children would understand what they could do and what they could learn.

Gradually the size of the groups that I prepared activities for grew, and also included Hungarian children or adults and the Hungarian language. Eventually I was working with whole groups. But it was in those early days in the spina bifida group, with the four small English-speaking children, that I realised that it was not important what I said but how it was understood.

Just as all the games and activities that a client takes part in during a session change, so too does the language used, the tempo, the rhythm and all the other means of facilitation.

When a client cannot yet sit straight then there is no need for me to speak this instruction. First the stages needed to achieve this position need to be learnt, and perhaps also spoken.

If a client has learnt to bend and stretch a leg in a controlled way, then there is no need for us to speak or count while doing it.

The aim of our work is for clients to solve situations spontaneously in their everyday life. It is not our aim to teach people to walk down the street counting from one to five. It is our aim to teach them to do it through whatever means they need to be independent, all the time lessening the need for external facilitation to which the spoken word and counting belong. Our aim is the internalisation of the action, meaning that the motivation and the activity comes from clients themselves.

We change the methods of facilitation used in the “life” in the group continuously, until it is no longer necessary to speak at all about the movements and it is enough to say "Please take your place on a chair" for the position to be reached spontaneously.

The time that this process takes of course varies from client to client which is why we as conductors learn to differentiate in all we do. It is also why it is necessary to have two or more conductors in a larger group, allowing for groups to be divided for certain times in the day for some of the activities.

In the stroke group I may have people who can say only a few words or only a few letters. These words will perhaps be used in a rhythm, which assists in relaxing muscles enough to carry out a movement. Another client in the same group, however, may only be able to say something out loud when working with the side of the body not affected by the stroke, and when using the affected side will try to achieve the same result only by thinking .

This will all be accommodated in the activities of the group.

And who forecasts the changes?

We have our well-trained observation skills for exactly this purpose, to see what is needed when. To train these skills is why as students we were encouraged to sit down and watch when the groups got too full of conductors.

How I wish that I had time to sit and watch my groups working and playing these days.

I love to sit and watch, I learn so much and enjoy so much to see how children especially put to use in their play what they have learnt, as it were "automatically". I just cannot understand how some conductors think that because children are enjoying five minutes playing together it is an excuse to leave the room. A time to make some phone calls or do some paper work! This is such valuable time to learn about the clients, time when new activities can be thought out. It is time that clients often do things spontaneously under their own steam for the first time . It would be such a shame to miss this.

Often though, the process of change comes about "spontaneously": the answers present themselves during the work.

Good observation skills can help the process along.

Conductive Pedagogy is not about plinths, and words, and counting

It is about aims and solutions, it is about observing what people needs in order to learn, physically, socially or psychologically.

It is about finding as many creative ways as possible to teach and to practise what is learnt.

Conductive Pedagogy is a means to use to teach our clients how they can organise their lives.

The path that we take to reach these aims must be as varied as possible, so that it is a representation of real life, which means variety in the language used as well as in the activities.