Custard brings a chain of memories 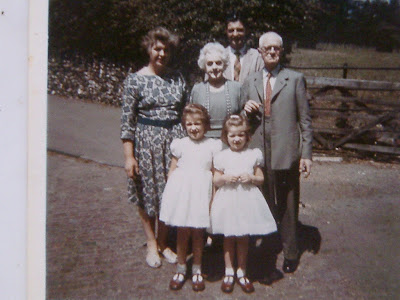 Sometimes I hear from home that afters are about to be served, with custard, and my mouth immediately starts to water. I love custard of all kinds, although I recently discovered that in England there is now some instant stuff for which no milk is needed. For me that no longer deserved the name ”custard” and I will avoid it on future visits.
The latest mention of custard sparked off a chain of memories
When I lived in Birmingham in the eighties I used to eat custard by the bowl-full. Just custard, nothing underneath it. No teacle tart, no bread-and-butter pudding. No spotted dick, steamed sponge-pudding or suet-pudding with gooseberries either. Just custard.
When I was an art student, and really organic and earthy, I used to make real custard, not with “Birds” but with eggs. But the very best was Grandma’s baked custard, with nutmeg on top. I have never had one like that, other than Grandma’s. She baked them in a tray of water, I think. Yummy.
We had them on race days when she and Grandad and the Maclarens from Newmarket went off in his flashy car, a big Rover I think it was, to the horse races.

We got to keep house at the pub on these days, something that my Mum and Dad did not really enjoy but I loved.

It meant hay-lofts with kittens, straw bales and horses, chickens to feed and mushrooms to pick from the manure heap. It meant space to learn to ride a two-wheeler, and swallows in the coal- house, with babies peering over the nest like choir boys.

It meant the black bric-paved back-yard smelling wonderful from beerbottles stacked in lovely wooden crates, the Guiness ones smelling best of all.
On rainy days there were the highly polished floors upstairs with small mats outside each of the eight guest rooms, that we played boats on, parking up in the doorways and getting on to another one. The mats were brown, hairy things and we each had our favourite. Some went faster than others on the ancient, slippery lino flooring.
If the rooms were empty and the doors ajar we crept in. Two of the rooms had four-poster beds in them that made wonderful trampolines or secret houses. In one of these rooms, very high on the top of a wardrobe, was a row of hat boxes. With the help of a chair I could just reach them and, if Sis stayed around to be my partner-in-crime, we could get them down and try on the usually pink hats belonging to my Grandmother.
The highlight for me (Sis didn't dare) was the highly forbidden ride down the banisters when we were called for tea. There were always beer crates stacked up in the hall below, which would have been, if not actually fatal if I had fallen on to them, then near enough. This was the reason that the ride was not allowed in the first place. It was irresistable and I did it anyway, as it was just like out of a story book. The bump on the bum at the end from the big knob told me that I had arrived.
I later heard that my mum had done it as a child and that my Grandma had even tried it once too, which is probably why I never got “caught”.
All that, just from a mention of custard for afters!
Thanks for the memories...
Posted by Susie Mallett at 21:50