"The train still standing at platform 2" 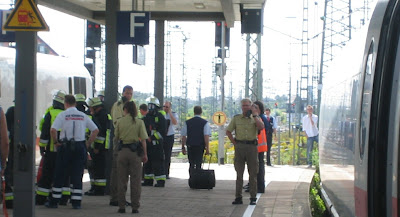 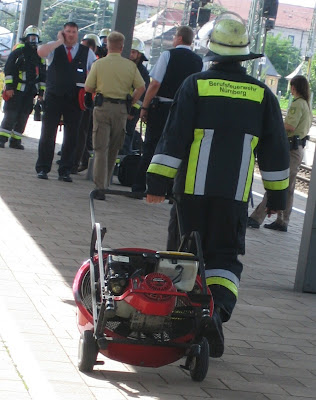 I am a seasoned train-traveller, for two reasons. My Dad was a train driver, so I got free passes all the time I was a student, which was often. I don’t have a car. I suppose a third reason could be that I simply love trains.

I hunt them out wherever I am, and ride them whenever possible

Long before I arrived in Australia, where I travelled mostly by Greyhound coach, I had already planned the trip from Sydney to Scotland Island on the double-decker train. Sometime in the eighties I had seen Spike Milligan on television taking this same journey to visit his mother, and I was determined that I should have the same adventure. I did it and to my joy discovered that the brother of family friends lived at the end of the line so I got a meal, a shower and a roof over my head too.

At that time, in 1986, double-deckers, that are now two-a-penny in Germany, were a novelty even for this seasoned traveller. I had figured out from watching the Spike Milligan film on TV that it would probably be the only way to cross Sydney Harbour Bridge and get a good view of the harbour and its boats, I was right.

Trains pop up in my life wherever I seem to land. I took a trip to meet an old school friend in Auckland in the north of the North Island of New Zealand, who then sent me rather like a parcel on to another friend in Wellington, down in the south She had booked me as a surprise on the twelve-hour journey on the tourist train. That was one of my train-journey highlights for sure. I filled a couple of sketch books on that trip.

I travel regularly with ICE trains and Bummelzugs on the Deutsche Bahn, I spent a summer as a student in Hungary travelling to all corners of the country by train, visiting conductive centres, and when I visit the UK I use whatever trains Britain’s now numerous companies are providing these days. I missed travelling the trains in Mexico and USA, where I used local bus services instead.

I have travelled on a sleeper to Prague and in Switzerland, and on numerous tourist trains in different countries with various old loco stock pulling them.

I have yet to travel on the Orient Express, the Glazier Express or the Trans-Siberian railway, but there is still time to do so one day!
German efficiency
This weekend I was travelling ICE, Inter-City Express, my favourite train of all on the German railways. In my opinion the Deutsche Bahn is run at just about the ultimate level of efficiency.

Today it all went wrong but I still arrived at my destination only one hour later than I expected to, and in one piece.

The excitement happened long before the train had even set off. I was already settled comfortably with my notebook and pencil, fortunatelyfound myself a seat without a reserved sign above it. I had wondered as I stepped up, minding the gap, on to the train what the awful smell could be. It was a lot stronger and more potent than the usual smell of hot-summer-day train.

It was not until ten minutes later that the doors were all opened. Police, fireman and the rescue services swarmed on to the platform, the firemen dragging their gear behind them just like Little Bo-Peep’s sheep and their tails.

From the number of official-looking people with walkie-talkies milling about on the platform, it looked as if something serious was amiss.

And it was, the train was on fire, up the front near the engine. Eventually, after the fire had been put out, we were evacuated and sent to the other end of the platform to avoid the fumes. Unfortunately photography had to be done from a distance.

I was impressed by the efficiency. With not a word said the platform was kept clear of passengers until the emergency services had reached the problem with their hoses.

Half an hour after our planned departure, those passengers travelling for just one stop were asked to leave the train and join the one on the adjacent platform. The rest of us were asked to leave shortly after and I joined the next scheduled train in the same direction also on the neighbouring platform. An extra train had also been laid on by this time to take the overflow of passengers.

I was becoming more and more impressed.

Again I found myself a seat and enjoyed at last a good long read. But only when the elderly lady sitting opposite stopped talking about the chaos. She was convinced that she was now in the wrong train,. She wasn’t but she wouldn’t believe me, got up and left

The one hour's delay meant that I and many others missed all the connecting trains, but there were enough staff strategically placed around the platforms asking worried-looking travellers whether they could be of any help. In this way, after two more unexpected changes with my next train always waiting ready on the opposite platform, I found myself at my destination, just one hour later than expected.
Traditional English delays
That is the very first time I have been delayed by fire. I have experienced delay because of leaves on the tracks and stoppages due to 'the wrong kind of snow'. I have been delayed and eventually stopped in my tracks, just an hour from home and very late at night, by trees falling on the line in a storm.

When travelling by railcar across the marshes in Norfolk to art school I often experienced flooding over the lines, or the driver stopping to pick up pheasants hit by the previous train. On rare occasions, on very hot days, delays were caused when the bridge stuck. It was probably the summer of '75 when there was a heat-wave at Great Yarmouth, along with a plague of bishy-barney-bees (ladybirds)!
There were regularly stray cows on the line and also many delays when the driver and ticket-collector would both jump off and right the sheep who were stuck lying on their backs in the meadows.

I have been delayed by some poor soul’s attempt at jumping in front of the train, by someone having a heart attack on the train, and also by waiting for the police to come to remove someone from the train who refused to pay for a ticket, but I have never been delayed by a fire before.

And I have never before been so impressed with the efficient way such an emergency and its knock-on effects were dealt with.

Sheep have legs that nature stuck on in the wrong place. They are attached on all four corners of their bodies, making it virtually impossible for them to turn over on their own if they ever find themselves flat on their backs. In my part of the world, where the meadows run beside the railway eack, it was always faster to stop the train to rescue the sheep than to call the railyard who would then call the farmer who, having no mobile phone in those days, could take hours to react to the emergency.
Posted by Susie Mallett at 00:19