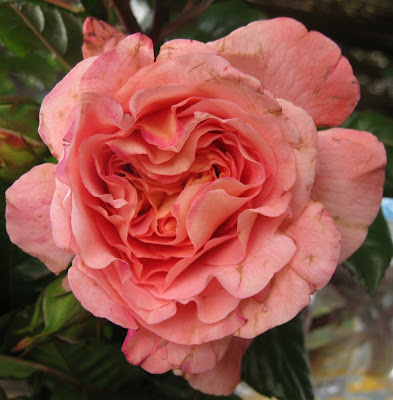 I have introduced my client, whom I call Laddo, to James Rose’s blog and parachute jump. Tomorrow I am going to help him introduce himself to James in person, on the blog.

My client and James look so alike, and they hold their limbs in similar positions, as far as I can see from the “flying” photos. It is so interesting to think that I may be able to bring these two young men together to share a few of each others dreams.

Laddo was inspired by hearing about James. He repeated over and over Ich bin buff, meaning I am speechless.
A possible dream

I hear from my client that he wants to do something special too. He has a dream that I knew nothing about. This is, he tells me, to sing on a huge stage, just because he loves to sing.

Well, I had realised that we are both quite good rockers as we sing-a-long to the oldies, Tina, Rod, Tom and David, but I had never heard a whisper about his aspirations to stand up there on stage too. Not alongside them, he quickly adds, but on his own.

I asked him whether he has a particular song in mind. He hasn’t, so I suggested that it could be time to get practising, as one can never know just as James didn’t, when an opportunity might eventually crop up.

Laddo listened enthralled when I told him that James had fought for years to get all the paperwork signed that finally allowed him to do his tandem jump. He said “Just like me, he didn’t ever give up”. He is right. Laddo also never gives up and this is paying off its rewards at the moment especially well.

Some times when I read the quotes from my client I am not quite sure whether I actually communicate the enormity of the words that he utters. His speech is very hard to understand and several years earlier he would often say, “Oh, it doesn’t matter” if someone didn’t understand. I and the family insist that it does matter, and help him to find alternative words, until we catch the thread of the conversation again.

This has resulted in his expressing himself more and more, and we are often astonished to learn of the number of words that he not only knows but also knows how to use correctly. His world is opening up its borders, he is learning how to fly and also to sing!

Thanks to James for inspiring my client.
I am sure Laddo will not be the last of my clients to be inspired by the “Likeabatoutofhell” blogger.
Notes
James Rose - Likeabatoutofhell -
http://www.likeabatoutofhell.co.uk/media-centre/media-picture-library/skydive/index.html
Posted by Susie Mallett at 23:36