Its all in the conductive can 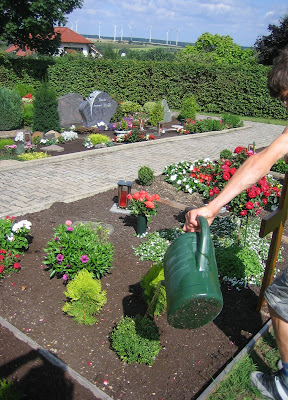 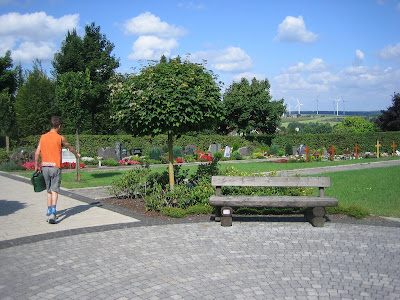 "A beautiful resting place, on top of the world"
Not spilling a drop

Today we discovered how my client could fill a watering can at the well in the graveyard. He learnt how to fill it just to the point where he was still able to carry it the two-hundred yards to his Grandmother’s grave without spilling a drop. Despite its being only water, he was determined to avoid any spillage.

Not at all bad for an athetoid!

While he was moving an outstretched arm to the side away from his body, to water plants a little further away from him, it was a delight to see and to hear that he realised he was using movements that we had been practising and discussing the importance of an hour earlier in our work room.

It really is such a joy to work together in this way. I love to watch his face when he achieves new things and receive his thanks in so many ways.
Saying lovely things
This evening, while we where walking in the evening sunshine, we stopped occasionally to throw a toy polystyrene bird into the wind. We had a lovely half-hour playing with the bird, a swallow, and afterwards watching the rals ones of which there are many living with their babies under the eaves of this house.
My client could hold the toy just lightly enough and for just long enough to throw it into the wind, then turn quickly enough without triping to see it finish its final looping. He asked whether I had more, as he wanted to throw it so high that "Oma" (Grandma) would get it.
Sometimes he says lovely things.
How stupid could I be, I might have known that this bird would be a success. I had only bought the one. At only 58 euro cents a piece I could have bought the whole box!
Learning lots
While we were "playing" birds my client told me “I have learnt lots today”. I asked him what specifically.
He couldn’t think of lots, he said, but there were a few important things. There was watering Grandma’s flowers and then there was opening his bottle of mineral water alone and spraying his legs with bubbles. Then there was being at last able to enjoy the thrill of throwing a toy bird into the sky for the first time himself.
I would consider that a lot for one day. He loved to see that bird looping above his head and delighted at turning round quickly without tripping over to catch a sight the smooth landing. Most of all he delighted in the realisation that it was for this he had been working so hard for all these years.
Actually, for most of his life.
Posted by Susie Mallett at 22:32