Thoughts on being a blogger on life and conductive practice 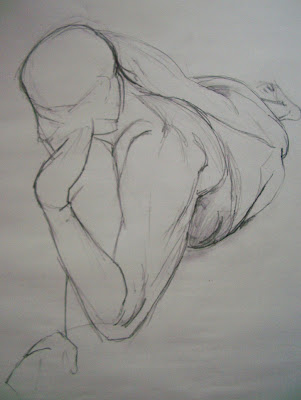 "Quiet contemplation", by Susie Mallett, 2005
When I left for work on Friday morning I had read what that early in the day was the first and only comment on Andrew Sutton’s posting “C’mon everybody”

Birth of a blog

Later I was on my bike making my way in the early sunshine and at the same time composing in my head what I would say in answer to Mr or Mrs Anonymous. I was hoping that at some time over this busy day I might eventually get a chance to sit down at a computer.

The comment didn’t get forgotten but my time got filled with a hundred-and-one other work things which got done wearing one of my ever-increasing number of hats. Work was interspersed with several inspiring bike rides and several train and tram journeys between one job and another. The tram and train journeys are usually ideal opportunities for one or two important things, especially writing down notes for blog postings or having forty winks. Today I was tired and I fell asleep instantly, as soon and the train got into motion.

The day got later and later and I eventually cycled home up the castle hill, arriving at my flat at long past midnight. When I finally switched on the computer at one a.m. on Saturday morning, to check my post, I discovered that there were by then eight google alerts to inform me of new comments. Two more had arrived by the time that I woke up a few hours later. And Gill had posted on this on her own blog too.

I realised that I would have a lot of reading to do before I could get started on typing up my own comment. I thought that I would probably need to do some rethinking too.
First thoughts on Anonymous
First I will concentrate on my immediate response, that ran through my mind all day yesterday after reading comment number one, the one marked "Anonymous".

These thoughts have followed two tracks.

Track one follows directly on from Anonymous's comment. I ask myself who wrote it. From which point of view is Mr or Mrs Anonymous making his or her remarks?
Track two is related to that fact that I must be the lone conductor who Andrew Sutton mentioned. The conductor who is writing a blog about her actual conductive practice. What is my motivation?

Taking a look at track one
Is Anon a user of conductive services who is afraid of “copy cats” who do not offer the real thing? But if so surely writing publicly about practice will give users a far better idea of what they should and should not be getting for their money. Couldn’t it give a refreshing insight into what conductive practice really is after reading so much "theory"?

Or could Anon be perhaps a centre manager, afraid that assistants might learn more and therefore be after more money?
I have worked with assistants who were so surprised, to the point of being shocked, to be taught by me how to work as a part of the conductive team in the group. Shocked to be given the responsibility to take part in the actual conductive programme and not just given all the “dirty work” to do.
Perhaps this is the view point of Anon.
Or is Anon a conductor? If so, then afraid of what?
It isn’t really all that important to me to know who Anon is. I respect the fact that some people prefer to remain anonymous for various reasons, especially when writing thought-provoking statements, but I find it fascinating to consider these three possibilities about why this particular Anon is against conductors “telling what you do”.
I for one would love to read more from conductors “telling what they do”. I can imagine how much I could learn from them. I would love to work with more assistants, with parents and managers and teach them about what I do. Surely this can only make for improved conductive practice?
Going along track two

Having read Andrew Sutton’s posting I also began to consider why I write my own blog.

Yes sometimes I do hope that they read, and copy!