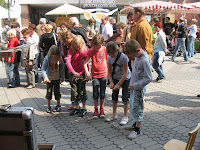 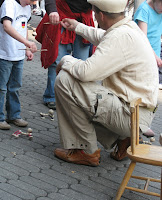 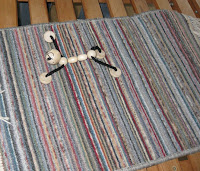 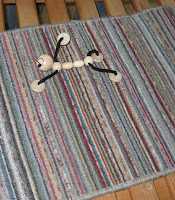 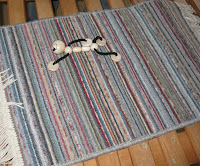 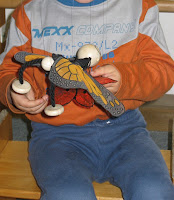 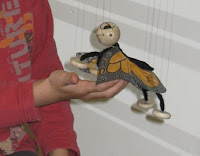 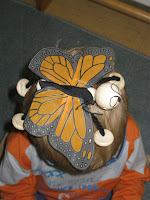 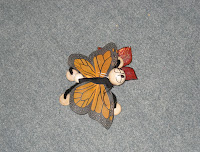 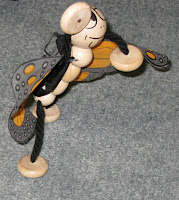 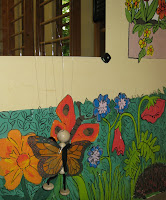 Knautschi the caterpillar and butterfly

Knautschi has been accompanying us in our work throughout the past couple of weeks, actually ever since I found him in the streets of Nürnberg on May Day (first photo).

The children have learnt to love him.

Actually, with some it was love at first sight but with one little boy, who already has an ataxic tremor, it took a bit longer. He shook even more, with fear, the first time that he saw Knautschi. Now it is an altogether different story, he would love to have him by his side all day long. He strokes him and calls to him and practises his speech with him.

We need to hang up Knautschi as high as possible to prevent tiny fingers from tangling his strings!

Each morning as we open the windows and let in the fresh, sometimes very fresh, air we call cock-a-doodle-do in the hope of waking Knautschi from his slumbers in his cosy bed on the wall bars.. He is difficult to wake, he sleeps very deeply.

Some days he is sleeping so soundly that, as we prepare to dive from our stools on to the carpet, all kitted out in our diving gear, we have to turn our snorkel into a siren and wake him with this.

Knautschi is a very sound sleeper. The children need lots of puff to get him out of his bed and into action but they are delighted because once awake Knautschi is immediately ready for play. He needs no time for eye-rubbing or for a cup tea. He hops down from his perch and is off on his rounds making everyone laugh.

He shows the children what he has been practising when they were away and then has a go at all the new movements that the children are trying to do. Sometimes he gets in a real tangle, which is when we get calls of “Knautschi come here. I will show you how to do it much better than that”.

The task that he has been best at was putting his hand in the small of his back so that he could pull up his trousers, if he had any! He taught all the children how to do it really quickly, faster than any conductor could!

In the first days that Knautschi was with us we talked about how long he would remain a caterpillar and what and how much he would have to eat to grow enough to turn eventually into a butterfly or maybe even a moth.

The children were convinced that he would be a beautiful butterfly and not a moth but they were more interested in him remaining Knautschi the caterpillar, whose legs got in a tangle and sometimes even got stuck between the slats of the stools and plinths. Of course this required the emergency services to come out to his rescue.

Little hands made light work of the rescue operations and we could soon get on with our daily work, with Knautschi back safely on his mat, or back nibbling away at the children’s break-time snack. While he nibbled they discussed what was his favourite food, which was always a toss-up between luncheon-meat-with-cheese sandwich or sliced apple. They never wanted to collect leaves for him from the garden, they thought that their own food was the best for his development.

The metamorphosis of Knautschi wasn’t very obvious it was actually very sudden. Not at all like it would be in real life, as we would have had him out of action as a pupa or chrysalis for a day or two, too long without our Knautschi!
In this non-feeding stage of his development Knautschi would be undergoing a complete metamorphosis, resulting in a total reorganisation to form his adult butterfly body. As we needed Knautschi this amazing process needed to happen fast!

We couldn’t spare him, we needed him in our work, so we compacted Knautschi’s metamorphosis into just one night, while wrapped in a “leaf” in his wall-bar bed.

We didn’t talk to the children the day before about what may happen overnight. We had discussed caterpillars and butterflies with them during the weeks before and now it was to be a surprise.

And a surprise it was

The faces were a delight when on the last day of our block Knautschi no longer clattered along on his flat clumpy feet. He flew gracefully through the air, landing on heads and hands and smelling the flowers on the wall, and meeting other butterflies friends there.

Not the metamorphosis. That wasn’t magic, that was hard work, as it is with the children too. It was, however, magic to see the children’s faces as Knautschi flew in for breakfast. They were fascinated. They called to him and introduced themselves to him. They held out two upturned hands for him to use as a landing place, at the same time making suggestions how he could practise flying and landing. They told him where he should fly to and what he could see in our room. Poor Knautschi ended up flying round in circles!

I can’t help thinking about and comparing Knautschi’s metamorphosis, his transformation overnight, with the changes that we have seen in the children during the past few weeks. They have really come on in leaps and bounds, and Knautschi has played a huge role in making their own ongoing metamorphosis a lot of fun.

They asked whether caterpillar-Knautschi will ever come back. A part of them was sad that he was gone, despite now having the beautiful butterfly fluttering over their heads. We assured them that the butterfly will lay eggs and we will perhaps meet the baby-Knautschis again in the next block

I had better get creating!

I wonder how much sadness there is for these children as their bodies transform and they learn to be more and more independent. Are they sad that they don’t need so much attention as before? Are they worried about being left alone?
Are the tears when asked today to do something that they learnt yesterday, tears of sadness because they now perform that task alone?

The happiness and joy of now being able to do something themselves always quickly returns when they are given the reassurance that we are there to help with the next, more difficult task to be learnt.

But this sadness is something that I have experienced often, sometimes children have even verbalised it. All these changes, the developments towards independence, also take something away. We must be sure to replace it with a different kind of care and attention.

Knautschi the caterpillar is gone forever

Just as we put on our thinking hats to plan each step onwards and upwards for the children, I now have to put on mine to begin creating the next generation of little Knautschis. Knautschi in the form the children knew him for a relatively long time is gone forever: the new form, the butterfly will remain. It will be this butterfly’s eggs that will become new Knautschis , and in turn will begin their own transformations along side the children’s next time we meet.

References to Metamorphosis and Conductive Education-

http://www.abilities.ca/health_activity/1993/09/01/conductive_education_1/
“And how can anyone argue with results? Before our eyes, children with cerebral palsy underwent an incredible metamorphosis from total immobility to walking with canes. We were told how it works. We were told why it works.”

http://www.movementcentre.ca/newsletter/newslettervolume9no1.pdf
“Like the butterfly, the logo is the representation of metamorphosis.”

Do you know The very hungry caterpillar by Eric Carle? This is a lovely book for under fives about a caterpillar turning into a butterfly. He eats his way literally through the book before becoming a crysalis and then a butterfly. I think you would love it.
http://childrensbooks.about.com/cs/productreviews/fr/caterpillar.htm