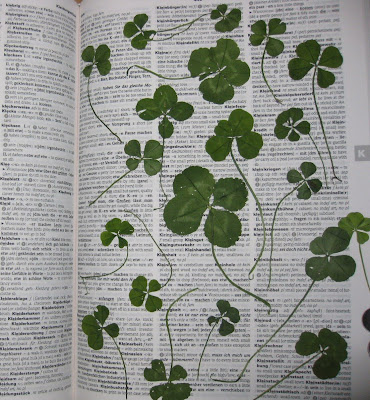 That brings this year’s tally to about thirty, which is well below last year’s total of over one hundred. 2008 was my best year ever for the amount of four-or-more-leafed clovers that I have collected but it was in 2002 that I found the clover leaf with the biggest number of leaves. It had eight!
I don’t go searching for them I just happen upon them, but if I find one I do look for a second on the same plant. More often than not there can be three or four more in the same place.

I was fourteen when I found my first four-leaf clover.I was cleaning my teeth in a field. We were camping in at Corfe Castle. With my head bent low, to avoid white stripes of toothpaste on my button down shirt and first-ever pair of Levi jeans, I “spotted” it.

I have been “spotting” them ever since. Or maybe they spot me

Maybe I do look at the grass more than most people, I am fascinated by the miniature world that exists below my feet. I like nothing better than lying on my tummy, face close to the grass watching the comings and going in what appears to be a jungle.

I really don’t go hunting for clovers. The pattern of a clover patch is different when there is a four-leafed leaf amongst it. It is this change of pattern that I notice. This may have something to do with my training in the visual arts or quite probably more to do with why I trained in the visual arts. I was observing oddities like this long before I went to art school.
Posted by Susie Mallett at 14:51