Bits-in-between for conductor and Sis 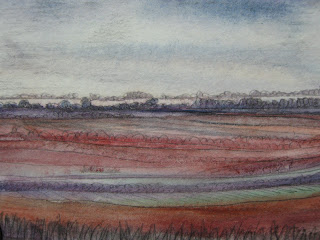 " Spooky Landscape" by Susie Mallett, September 1st 2011
Just what the doctor ordered
A trip to the theatre, the first for ages, was just what the doctor ordered and with my sister for company too, that made it even better.
My sister had asked me a long time before the performance if I would like to go with her and we had both, independently of each other, Googled to see if it would be worth the expense of the tickets. There were a few You Tube recordings on offer and my verdict, after listening to a couple of them, was that even if we did not find the performance very funny the singing was of a very high standard so we would enjoy that at the very least. Sis agreed so the tickets were purchased.
Lots of spooky men from Australia
We discovered that in real life the Spooky Men’s Chorale was indeed a group of exceptional, albeit very peculiar looking, singers and occasionally between the serious pieces they were also funny, with a humour as dry as the one that we are used to in Norfolk. I am not sure how well they would go down in Germany, where my dry humour often gets miss-read!
The accent of this group of spooky men fitted in quite well too, Norfolk and Strine are not so dis-similar.
Making the every-day situation funny
With many of the phrases from their self-penned songs printed on magnets and button badges we were able to take some of the oddities home with us:
“Spooky gardeners cause mass wisteria“
“Happy…just haven’t told my face“
“The mess gets worse all by itself”
Other snippets remain in our memories and are already getting triggered when we find ourselves in a situation that was mentioned in a song as well as on a badge. Here is one example: a thing does not work and a newly purchased thing is incompatible and an adaptor is needed, but the thing works differently now than it did before. Those were words of a Spooky Men’s song but could have been all about my dongle that sort of works and my sister’s dongle with her new adapter aerial thing that makes hers work better than mine. This persuaded me that my thing also needs a new adapter thing so it could work as well as Sis’s thing does. I am still struggling on without an extra thing adapter and smiling as I remember the daft song.
There were amongst the jokey original songs a good many adaptions of well-known songs, from the Beatles, Abba and Earth, Wind and Fire. However, it was a rendition of our Mum’s wartime favourite, Don’t fence me in, that made the evening for my sister and I, we joined in every word.
I also particularly enjoyed what the Spooky conductor described as Georgian men’s songs and I wonder if they were adaptions of Gregorian chants or music for men from Georgia. Not being able to Google at the moment to find out, due to not having that adapter thing like my sister has, I cannot be sure about this but whatever the songs origin they were lovely to listen to. It was obvious by the skill shown in performing these, what brilliant musicians the Spooky Men are.
I found the whole evening all quite conductive really, apart from someone who I have met through conduction sitting in the row behind me! Watching this group of performers putting everyday life into perspective made me think a lot about my own work. The singers were enjoying moments of everyday life and this was the motivation for the song writing and singing, and just in the same way that taking part in everyday life in a meaningful way is a huge part of the motivation that my clients bring with them to learn conductively.
Thanks to Sis and Spooky Men for creating a lovely bits-in-between evening!
﻿
Posted by Susie Mallett at 00:54