Red Hats on the London train 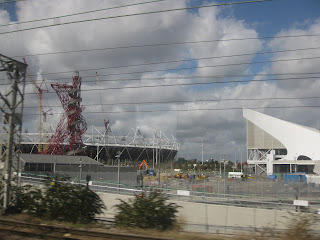 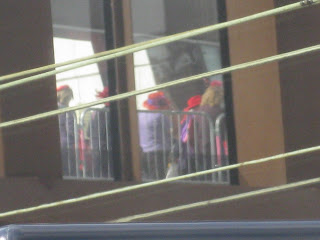 "Stratford, Olympic stadiums and red hats on the walk-way to the new shops"
by Susie Mallett, 13th September, 2011
The Olympic Games 2012 will soon be upon us and the preparations are falling into place in Great Britain.
Once when I was home there was tension in the air as the decision was being made over whether these games would come to Britain or not. With the role of host country safe in Sir Seb Coe’s hands, the wheels got turning.
On another occasion when I was on home soil there were events taking place in London promoting the Paralympic Games. This is something that I shall be watching with interest, as I hope that some of my very early conductive clients will be taking part in these.
I was also at home when the controversial allocation of tickets took place. On the most recent trip to the homeland I witnessed the opening of the country’s biggest shopping centre that happens to be located right next to the Olympic stadium in Stratford.
This final event on this list would have passed me by had I not been travelling from Norwich to London Liverpool Street on the day of this grand opening. I was brought to my senses, or rather my nose was torn away from my book, when the train made what I thought was an unscheduled stop at a station that since my childhood always whizzed past the window. I was so absorbed by the new sports stadiums that I almost missed the stream of travelers leaving the train and crossing the glass footbridge.

I soon realized that it must be planned stop, although it was only later that I learned why. I must admit that I only noticed the stream of people because, going along with the flow, I noticed a veritable shoal of purple-clothed, red-hatted, middle-aged women.
When I grow old I shall wear purple
I have seen similar purple and red phenomena only three times, twice in Norwich and now in London, but apparently the Red Hat Society is known world-wide.
Having been a fan of Jenny Joseph since I was very young, and having aspired to being like the lady in her poem for most of my adult life, perhaps it is time that I joined the Red Hat Society. I do know that we have a local branch.
More on my blog about Jenny Joseph and the Red Hat Society:
http://www.susie-mallett.org/2008/03/before-i-am-old-i-shall-wear-purple.html
Posted by Susie Mallett at 19:52