Celebrations and memorials on September 11th 2011 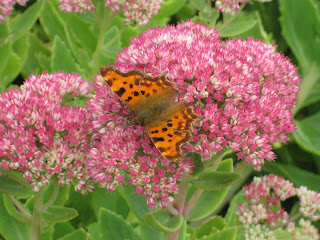 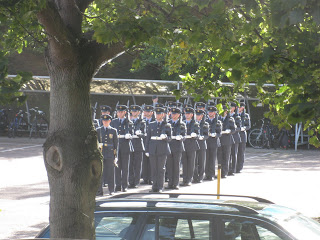 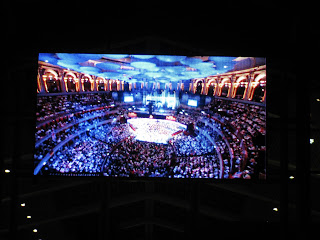 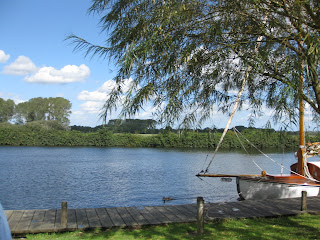 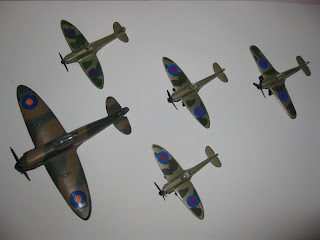 My own Battle of Britain Memorial Flight!
Spitfires and a Hurricane,
All Dinkies, left me by my Mum
The eleventh of September is and always will be a day of celebration in our family, in fact in the local neighbourhood.
What the Americans call Nine-eleven has a different meaning, a day that for the last ten years has been a day for silent thought for all those who died in terrorist attacks in 2001
Ten years on
Although the morning papers had more stories than usual about New York, a decade after those dreadful events, they did not get read in our house until later on in the day.
Four-score years plus five
I was up earlier than usual, preparing a special breakfast for my Dad and our visitors. I decorated the table and piled presents high, so that when Dad got back from an early-morning, one-kilometre long swim with his work-mates, we could begin his eighty-fifth birthday celebration.
By the time we got started with our breakfast party I had already walked up the road to knock on the front door of the house where my old Girl Guide Captain lives, to bring her a birthday bouquet from the garden. Another party was being prepared there.
The celebratory day continued with lots of phone calls, a wander round the garden and then a pint of local beer beside the River Wensum. We sat in the sun just the other side of the newest Norfolk Broad, Whitlingham, in the company of Greylag geese, Billy Bluelight (who sold Bluebell Matches in Norwich in the winter and raced the trip-boat to Yarmouth in the summer season), a beautiful wooden yacht and a cormorant drying his wings high on an alder tree. The alders together with the weeping willows give the river banks that typical pale grey-green hue as the silvery backs of their leaves shimmer in the breeze.
Forty-four years ago
In 1967 on my Father’s forty-first birthday András Petö died, it was also AP’s birthday. I was ten-years old, preparing to take the eleven-plus, winning first prize in a flower-arranging competition at school, and very envious of my sister’s new grammar-school uniform, trying on the emerald green blazer at every opportunity.
I was being brought up as conductively as one can be without actually knowing about conduction!
I know for sure, because it is what I always do, that I would also have been busy making a present for my Dad and painting the card for him. I expect that it is still somewhere in the house amongst the treasures that my mother stored away for me to discover so many years later.
1940, the Battle of Britain
Celebrations to enjoy with memories of my Mum.
My Mum had been a WAAF and I suspect that, just as I think that once a conductor always a conductor, it applies to WAAFs too.
Once a WAAF, always a WAAF- my God-mother who with my Mum trained as a Spitfire mechanic at RAF Pershore, is still alive and still as enthusiastic about all things to do with the RAF and planes as my Mum was all her life.
I grew up in Norfolk where the three aircraft of the Battle of Britain Memorial Flight, the Lancaster Bomber, the Hurricane and the Spitfire were stationed for many years. We were often treated to a private display as they flew over our garden on route for a Norwich fly-over or an air show somewhere else in the country. Mum heard them coming from miles away and she and I were always waiting, eyes trained skywards, sometimes even lying on the lawn!
I heard on Monday 12th, the beginning of Battle of Britain week, that the Spitfire would be flying over Norwich, so I spent the morning in the garden pretending to be busy!
I disappointingly missed the Spitfire although I heard it in the distance. My Dad suspects that it was already at Norwich Airport so flew in from the north, thereby missing our house. Never mind, he assured me that I had another treat in store in the afternoon when a military band would be playing in the car park of the council buildings at the end of our garden.
We were just about to sit down for a mid-afternoon cup of tea when the blustery wind sent a few bars of music our way. So grabbing my camera I rushed out of the gate, up the lane and into the surrounding wooded area. I sat under trees that had once been in the fields where I fed the cattle and cleared out the cowsheds with my Grandfather as a five-year-old just where my Mum would have been until a few years ago.
I watched from afar the inspection of the troops, the lowering of the RAF Ensign, stood for the National Anthem, and enjoyed the final pieces of music as the band marched out of the “arena”.
Pomp and circumstance
That was the second time in two days that I had stood for the National Anthem. On Saturday evening I walked into the city for an open-air screening of the Last night of the Proms, from the Royal Albert Hall, another of our family favourites! I was flag-waving and singing about the green and pleasant lands of home along with a few friends and other locals.
Notes
Billy Bluelight -
http://en.wikipedia.org/wiki/Billy_Bluelight
The Norfolk Broads -
http://en.wikipedia.org/wiki/The_Broads
RAF Ensign -
http://en.wikipedia.org/wiki/Royal_Air_Force_Ensign
Family Favourites -
http://en.wikipedia.org/wiki/Family_Favourites
﻿
by Susie Mallett, 14th September, 2011
Posted by Susie Mallett at 01:02

What a nice personal Memorial Flight.

At least two of them are painted as Spitfire IIs, which would be correct for the Battle of Britain (1940). Spitfire IIs were manufactured that far from where I write this, at the old Castle Bromwich
Airfield.

Years later, in the sixties, those Dinkies of yours were made by Meccano, at Binns Rd in Liverpool.

All 'Made in Britain'.

As Frank Hornby used to say, 'British toys for British boys' (he had been very keen on keeping the products of the Nuremberg toy manufacturers out of Britain in the years between the two wars). I myself grew up withinin a strong tradition of keeping anything German out of the country! Hence, I suppose, this week's very British anniversary, its pale-blue RAF Ensigns and now antique fly-pasts (weather permitting!)

I was also made in Britain, in Essex in 1939, and grew up in the never-forgotten shadow of all this – that's how I know about such things.

Not much to do with Conductive Education (not directly) but I am sure that all this will bring some interesting visitors to your site!