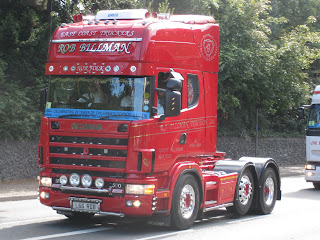 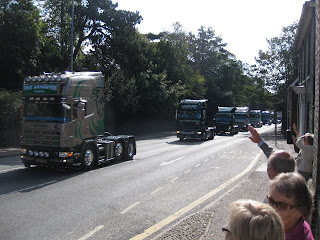 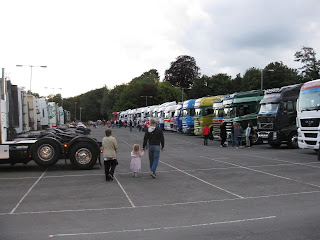 The 26th East Coast Truckers Convoy
Each of the eighty-three trucks that travelled through the county in convoy had a banner in the front of the cab. The long blue banner stated that this was the twenty-sixth time that these enormous, shiny trucks had honked their horns as they drove past my parents' front door at the start of this annual adventure for children with special needs.
This is always a journey with a difference, a journey that makes a difference to the lives of many special children from the area. Most of the route that these travellers take is lined with hand-waving spectators, who are only waiting for a honk, a flash of  the many lights or a few waves in return. We “East Coasters” know that this is a really special day for each of the children with special-needs and many local residents line the route to wish them well on their way to the seaside and to see them safely home again in the evening.
The twenty-sixth convoy was the very first that I have witnessed. I just happened to be there with my Dad so we waited together on his doorstep for these amazing vehicles to pass by. I actually felt like I had been there so many times before, as my Mum had always described it in such detail to me on the phone. She had always waved for me too. This time I waved for her!
Every year in each of the trucks beside the driver sits a child with special-needs, accompanied by a carer. In the first few years that this event took place one of these children was one of my first “Petö” clients, a child who I used to work with whenever I was visiting my parents. He knew my Mum really well as he often visited her when I was back in Germany, so he would always be looking out for her standing at the door on that very first leg of the journey, and she never missed giving him a wave.
This time I was waving
I could not believe my eyes when I saw the trucks appearing. They are huge creatures, yes they do look like animals of some kind. They were gleaming, having just been polished, and all of them had more lights on them than a Christmas tree. Each truck in its own livery has a personality of its own and even the horns have different honks!
I was so impressed by the whole event, by the work that the organisation puts in for it to be such a success, by the children’s happy faces and by the trucks themselves, so that not only did I wave them out in the morning but I grabbed my sister and my camera and watched and waved at the entrance of the parking lot as they all returned at twilight after an exhausting day out. The trucks looked even better then in the evening light, all with their lights on. And the biggest surprise of all: everyone was still waving!
Most of the folks of the East were talking about it yesterday, not only about this wonderful event but because there is doubt that it will be able to continue. The Convoy needs police escorts, roads need to be closed and road safety needs to be looked after. The police announced that they will not be able to provide this in the future. Most people who I spoke to feel sure that other people can be found who will provide this cover to ensure that the East-Coast-Children will be able to join the East Coast Truckers Convoy for many years to come.
Raising smiles not money
This is not a money-raising event. It is a smile-raising event, and not only for the children who are given a day out and their families. From Norwich to Lowestoft, then on to Great Yarmouth and back to Norwich, the streets are lined with well-wishers. Travellers, day-trippers and shoppers, park their cars in lay-bys to let the Convoy pass and the drivers and passengers lean out of the windows to hear a honk and to give a wave. It is a bit of fun, a soul-warming day for everyone who participates, in whatever way. Long may it continue to be so.
Thanks go to the East Coast Truckers for all the joy that they bring to the people of the region.
Notes
Read more about the East Coast Truckers -
http://www.edp24.co.uk/news/picture_gallery_east_coast_truckers_convoy_could_be_its_last_1_1007351
http://www.youtube.com/watch?v=4VUwu8lyoa4&feature=related
Posted by Susie Mallett at 17:01