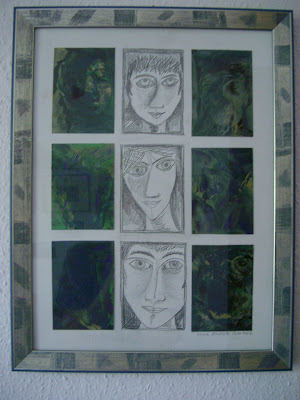 ..teenagers look me in the eye

I just received a Google alert informing me that there was what I believe to be a bogus comment on the posting on Andrew Sutton’s blog called “Conductive Education against electric wheelchairs. Er…no”.

That posting linked to a posting of mine:

That link reminded me of what I wanted to write about!

I am certainly not against electric wheelchairs in fact as you can see in that post I am very active when my clients decide that this is what they wish to have to give them the freedom that they cannot achieve by walking but feel ready to experience.

Yesterday I visited a group of fourteen to sixteen year olds many of whom I have been in contact with, through my conductive work in the area, since they were three or four years old.

I had been invited to the local school for children with physical disability by the after-school care group with whom I worked regularly up until last year, when the funding was removed for conductive supervision in the group.

The children and their group leaders had decided that it was time that we all met up again so when they called on Friday we arranged a spontaneous meeting for Monday afternoon.

There are three children in the group who are wheelchair users and five children who can walk. There was my colleague and I who were pushing our bikes and of course there were the two group leaders. We made our way, strolling though the park, to the Italian ice cream parlour.

It always amazes me how quickly children of this age change, especially the boys with their deep breaking voices. Somehow it seems even more amazing when it happens just as naturally with our Petö children.

Suddenly it seems these group members are no longer children. They are teenagers with all the associated teenage likes and dislikes, problems and joys. But underneath it all they are still the littlies who used to cuddle up to us, and given the chance still do.

How independent they have all become

It really was a pleasure for me to observe how much they have developed as a group and praise each of the tremendous individual steps forward that they have made. Three of them will be off on holiday in August, for the second time, with the conductive “survival” camp and another one will be making his maiden trip!

Holidays-without-families are as much a step forward for parents as for the teenagers involved.

A big well done to all of you!

I also observed the amazing developments achieved with the arrival of the second electric wheelchair in the group. The sixteen-year old, who has had this wheelchair for only four weeks, is a changed person. Instead of someone who hung his head almost onto his knees while someone pushed him in his manual wheelchair and someone who almost reached the same posture when he tried to propel it himself, I met someone who was staring me in the face. I met a young man who is now very alert, who is speaking loudly and clearly and looking everyone in the eye. His new-found freedom has given this teenager a way of bringing together all he has learnt in his long conductive upbringing.

There is another member of the group who has an electric wheelchair. He has had his for five or six years, since he was a daily member of the group in our centre. It was his wheelchair that knocked all the plaster off the walls in our rooms as he practiced. Its arrival changed his life for the better too.

Being able to move independently changed his outlook on life too and as he sits as straight as a die he is out in the streets negotiating the traffic lights and pavements, parked cars and pedestrians just as well as his classmate.

Both of these children can walk several metres using a rolator, but it is exhausting for both them and the person who helps them. What a joy it was to see their faces as they independently crossed several busy roads and with self-assurance and self esteem that can only come with being in charge of one’s life, ordered their ice creams and got stuff in.

I have been invited again and I cannot wait to meet them all again at the end of May to learn about the next steps forward in their lives, hear about their new achievements and their plans for the future. Some will be leaving school in the summer to start apprenticeships for their future work at a nearby college!

Conductive upbringing for teenagers is certainly not easy but with enough adaptions it can carry on and on and on.