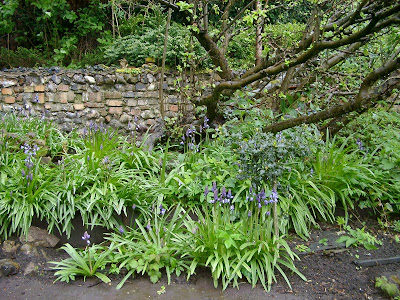 I was in England at the beginning of February when the snowdrops were in full bloom the early crocuses had just spread themselves in a welcoming carpet over my Dad’s garden and my favourite cemetery- The first daffodils were yellowing beneath their papery covering and aconite stars were to be seen under the oaks and beeches in Norfolk’s parkland.

To make the painting of the green and pleasant pastures of England complete the lambs had started springing and the piglets grunting.

Now in mid-April it seems that here in Germany the spring flowers and the early blossoms came and went in the space of the seven very hot days of a week ago. The magnolia was especially spectacular remaining pink until the petals fell as there were no frosts to spoil it.

I expect on Easter weekend in Norfolk there will still be swathes of daffodils in the grass between the dual carriageways and wonderful pink flowering cherry trees in all the school playgrounds. The early crocuses will be over but I expect there will be plenty of the asparagus-like, prehistoric looking spears of the blue bells poking out their heads ready to be picked.

It is that transformation from winter to spring that I miss about England almost as much as I miss the smell of the sea.

Winter is very long in Germany

We wait and we wait and then it bursts upon us. If you blink you might miss it as it quickly passes into summer. Often, as it did this year, the temperature hits twenty-five Celsius after a week of minus ten, the crocuses and daffodils are then over and done with within a few days as it is much too hot for them.

The blossom seems to appear as if someone has stuck cotton-wool balls on the trees over night. Suddenly the wintery black branches of trees are sparkling with young emerald green leaves. A colour that I always wish would last a little bit longer before the sun and its heat begin to bleach and dry the leaves to a crispy, darker green.

So I am glad that I experienced an English spring in February. It shortened my winter and cheered me up no end. I even think that I enjoyed the German spring more this year for having caught a bit of England’s.

I had the best of both worlds this year but it is the spring that Browning describes in his poem that is the spring that I prefer. The spring that comes slowly, sort of creeping up and calmly walking over us. We would not really notice that it actually here if it was not for all the bright colours that it brings with it and the bird-song.

Oh, to be in England,
Now that April’s there,
And whoever wakes in England
Sees, some morning, unaware,
That the lowest boughs and the brushwood sheaf
Round the elm-tree bole are in tiny leaf,
While the chaffinch sings on the orchard bough In England - now!
And after April, when May follows,
And the whitethroat builds, and all the swallows -
Hark! where my blossomed pear-tree in the hedge
Leans to the field and scatters on the clover
Blossoms and dewdrops - at the bent spray’s edge -
That’s the wise thrush; he sings each song twice over,
Lest you should think he never could recapture
The first fine careless rapture!
And though the fields look rough with hoary dew,
All will be gay when noontide wakes anew
The buttercups, the little children’s dower,
- Far brighter than this gaudy melon-flower!

But then they never expected that HMG could ever commit anything like the Green Paper.