Bah, Humbug? Not for me today! 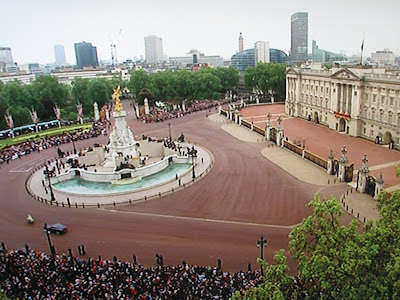 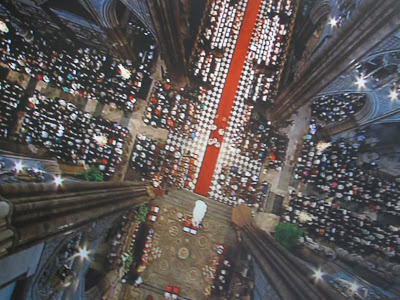 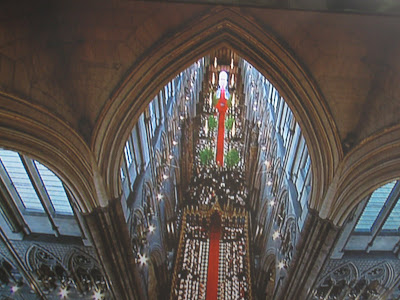 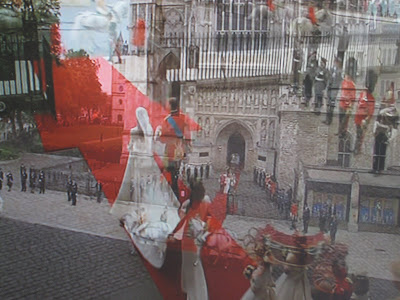 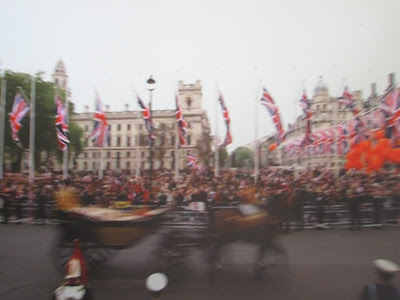 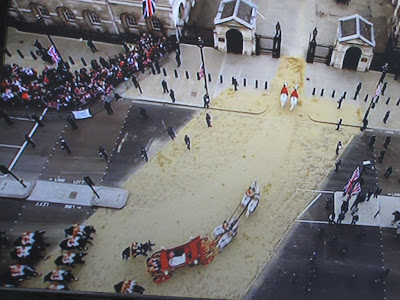 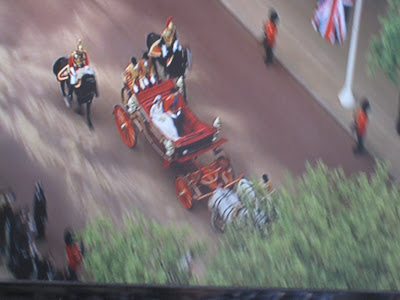 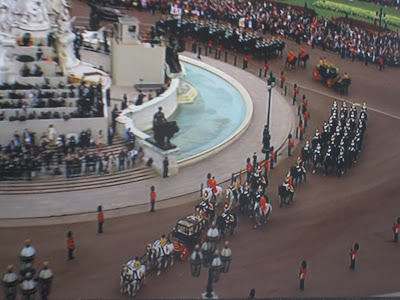 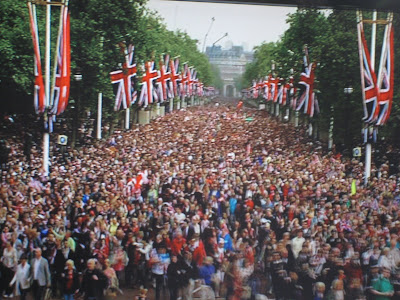 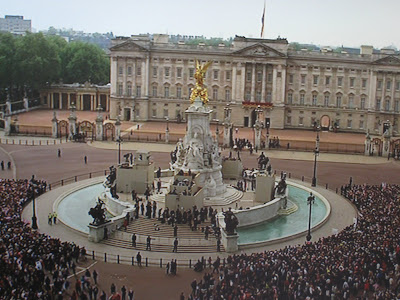 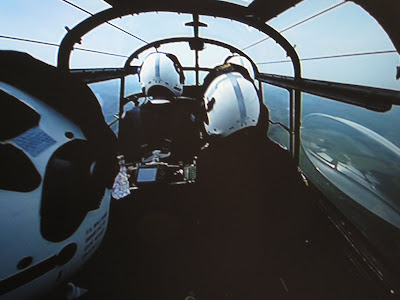 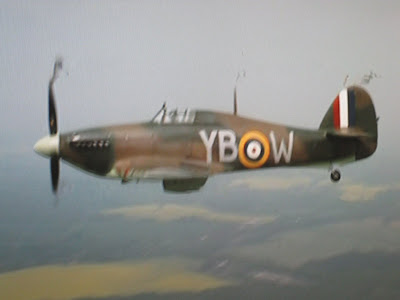 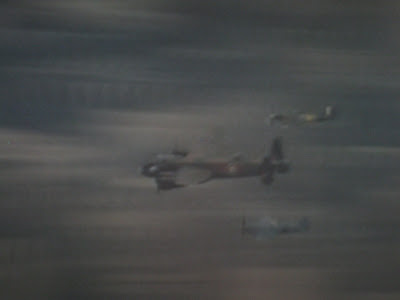 The photographs above are all taken by my Dad and I as we watched. Dad’s great idea, as he said it felt like we were there as real tourists!
Transformation
One of the themes that the Lord Bishop of London included when speaking for Catherine and William in Westminster Abbey today was the human quality that people who are close to each other have, not for controlling each others live’s but helping to transform each others live’s. Transforming and motivating each other to live life to one’s full potential.
As soon as I heard this I decided: Yes, I will write a blog about it and admit to my readers that my Dad managed to change me just a little bit, to get me hooked and motivate me, through my Mum, to watch the Royals with him. And on such a lovely sunny day when he knew that I would rather be outside.
Me transformed!
I actually sat down to watch the wedding with him, sitting in my Mum’s chair wearing her gardening hat that I hurriedly decorated with ribbons from her present-wrapping drawer.
I had actually planned to garden all day to avoid going anywhere near anything Royal or associated with weddings, hence the gardening hat. But when an excited Dad woke me this morning telling me to hurry so as not miss the Queen, I just could not disappoint him.
I took my seat at the table for breakfast two hours before the arrival of the first Royals. We sat there together throughout the whole occasion. He got the Union Jacks that had decorated my Grandparent’s pub for the wedding of the Queen and Prince Phillip, and then the Coronation a few years later, out of the lumber room at the top of the house. The same flags that I had waved when the Queen came to Norwich to open the Norfolk County Hall over forty years ago and that we had adorned with the name of our football team to take to a Wembly cup final in the early Seventies.
While the BBC did what it is good at, commentating on British pageantry, Dad told me stories about when he and my Mum went to London for the Coronation in 1952.
I know. I had been determined not to get caught up in wedding fever, and I had avoided it all week but it was my Dad’s enthusiasm that got me in the end and his love for my Mum who would have sat there with him with tears streaming down her face as she listened to marching bands and watched the fly-past. Now I have to admit that I really am rather pleased that Dad naturally assumed that I would watch with him. Especially when the planes flew over with a shot of a Spitfire taken from the Lancaster bomber; Mum the Spitfire mechanic would have loved that.
I realised that I was well and truly hooked, and watching and listening intently when the Lord Bishop of London’s words on transformation made me reach for my notebook and begin this posting.
What I and the World saw
I do not really have much to write about what I saw, although I did love all the hats and was glad to see that there were many of them. And I loved the amazing shots taken from inside Westminster Abbey, that I managed to photograph from the TV.
I was also greatly impressed by how the police brought about the transformation of the roads outside Buckingham Palace.
While walking sedately down the Mall, seven policemen on horse-back, and only a few more on foot, led hundreds-of-thousands of well-wishers right up to the railings around the Palace. It was an amazing feat of organisation, it looked like a blossom opening.
They transformed an area that only minutes before had been used for a stately procession into a park for the people. Seen from above this reminded me of the flower that opened at the beginning of Watch with Mother in the early days of BBC’s Children’s Television
I am still very surprised that I became one of the millions of spectators today. I had been determined to garden and then make a start on the renovation of my Mum‘s old 1939 Raleigh bicycle that I last used when I was an eighteen-year-old art student. Instead I got so infected by my Dad’s enthusiasm and his memories of being there with my Mum that I just had to join him.
Six weeks ago when a friend from New Zealand, who is visiting Europe at the moment, told me of her plans to join a group of people at the British Embassy in Budapest for the wedding I asked her: “Whose Wedding?“ At that point I really had no idea that there was to be some good-old-British pageantry on show during my visit to England.
In the swing of it
Now six weeks later, after a week in England, there I was glued to the television with the rest of the world. So with that one surprise over, the second surprise is about to happen. Dad and I are just transforming ourselves at this very minute into more respectable residents, to join the official street party!
Now I would never have thought I would be doing that when my friend mentioned The Wedding just a few weeks ago.
I suppose I did once surprise the other members of the British conductor-student group in Budapest. None of them could quite believe it when I accepted the offer of the chance to meet Princess Diana on the occasion of her visit to the Petö Institute. I was considered even then a very unlikely choice. I am not a Royalist but I do enjoy observing and even taking part in unusual occasions. And I am ever ready with the camera to record it all.
Posted by Susie Mallett at 00:17