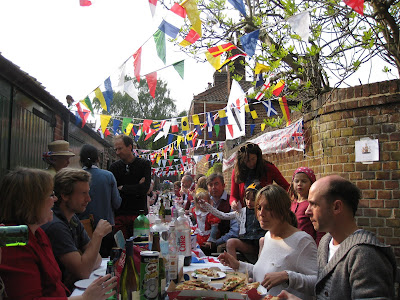 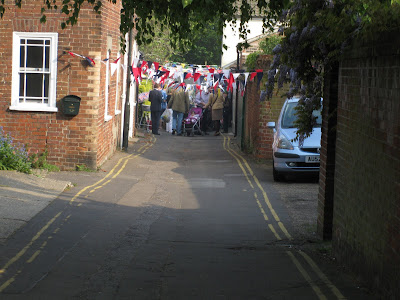 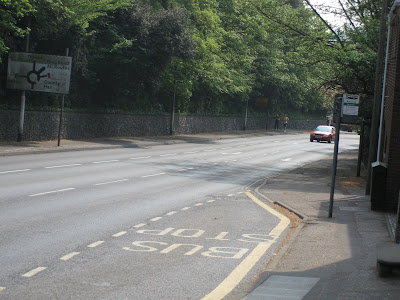 The boring street scene photograph above is a shot taken out of the front door at the very moment that Kate Middleton, now the Duchess of Cambridge, arrived at Westminster Abbey on 29th April. On any other day this road, the A11, is a continuous stream of traffic from dawn till dusk.
The other pictures are of our local Street Party.
A little bit of my life

Fifty years ago I met the children who lived at house of the bottom of the lane where we played very often.

Yesterday, having watched The Wedding together, Dad and I took a stroll up the hill to the Resident‘s Association’s Street Party that was actually a lane party, in the lane where we played and where I learnt to do topples over railings.

The railings are still there and recently my sister and I discovered that such railings were actually called Topples in my father’s toppling days. There was a whole row of them at the end of his street. My eighty-four year old Dad recently revealed that he was quite an expert toppler in his day, and I thought it was only a girl‘s game! Sis and I remember Dad’s Topples from our visits to our Grandparents.

Yesterday we took the path down my memory lane. A lane where as children we played What’s the time Mr Wolf?, Hop Scotch and Chinese Skipping, met the boy with the pet jackdaw and got scared by what we thought were witches who lived on the corner. It is a lane that is now full of upmarket cottages whereas fifty years ago they were almost derelict, with two rows of outside toilets and washhouses for the resident‘s use. Quite a contrast even then to the houses that faced the main road where we all lived.

At yesterday’s street party I met the mother of one of my chums from my first days at school. I think I last saw her when I was ten years old and despite her poor eye sight she remembered me. I think possibly because I look like my Mum.

I was introduced by the local historian to some of the other residents as the person who knows most about our road because I grew up here. I moved in with my parents when I was six months old, Dad cannot remember if it was before Christmas or after, so it could have been 1957 or 58. My family home and my Grandparent’s pub are at the bottom of the hill and my school was at the other. I walked or cycled its length on most days for eighteen years, as had my mother when she was a child too.

The local history group has got me booked for questioning before I leave. They have already interviewed Dad several times and my Mum gave them all she could remember before she died.
After the Wedding fever it was back into the gardening hat for me. The shallots, leeks and peas are hoed, the marigolds and antirrinums are pricked out, the paths and steps are all weeded and swept, the compost heaps accessible again and the flower-beds ready for the planting of annuals.

All that is left on my list of essential to-dos are the digging of a patch of ground for the re-planting of lilies and the clearing of the brambles from beneath the best apple trees so Dad has access for fruit picking in the autumn.

Of course there are also the on-going jobs of weeding and watering, the sitting to admire the day’s work with a cup of tea in the evening and the picking of flowers for the kitchen windowsill. All not part of any list but things that I do with no need for reminding.