Sometimes I could cry 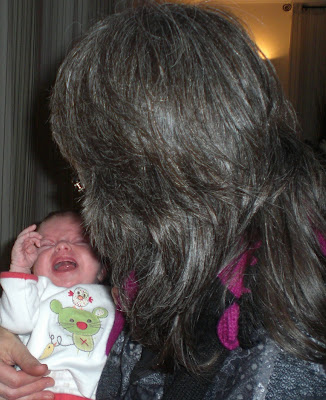 A bike, shoes and a wheelchair

Six or seven weeks ago now I wrote about teaching a five-year-old boy to ride his new bike, that was just before I left Nürnberg for six weeks. At the conductive centre in Nürnberg WE have been waiting for this child to get a bike, a wheel-chair, under-the-knee orthopedic splints and new shoes, since October 2009!

At last we have them all, and we also have a "new" child in our midst!

The wheelchair and the bike arrived in February and March, and while I was away the splints and the shoes arrived too. For three whole days I have been fighting back the tears.

Today this child who has never been on his feet walking until the splints arrived, walked sideways holding on to what ever furniture was put there for him to hold on to. He did it all on his own! No one was beside him and no one telling him what to do. He just wanted to get from the play area to the table, for his breakfast.

Each day this week he has been walking with a ladderchair, in his new shoes and splints, on his very spindly legs from one room to the other. A distance that some of our long term "Petö" children consider to be a marathon. It is hard to believe that this is the same child who before he came to us spent hours in a corner flapping his hands before his eyes and clapping. What else had he to do? He was keeping himself amused.

Today this child, with his new-found view of life, amuses himself in different ways. He played today with the other children in the group, he spoke to us spontaneously, he showed us that he can count and that he knows the noises that animals make. He hardly ever waved his hands about in front of his eyes as he was too busy moving about and socialising. He responded to instructions, and he smiled and smiled and smiled. Not surprising really, the amount of praise he was getting! In his place I would have been smiling too.

This is the same child that was on the point of getting the stamp "autistic"on his files. I wonder what those who were making such judgements would have on the stamp if they had seen him in the group today.

For us he was top of the class. He was motivated, socialising, learning at break-neck speed and most important of all, he was wide awake and happy.

Why should I cry?

I could cry because this child really did sit on the floor in the centre that he attended before coming to us, he was afraid of all the other children there, who were noisy and running around him hectickly. He slept a lot and cried a lot when he could have been riding around in a wheelchair or on a bike, when he could have found his feet and with them a completely knew outlook on life.

But there will be no tears now, there is no time for them. We have too much to catch up on. We just look forward to the future with progress and developments that will make up for the lost years. How lucky we are to be witnessing a bit of magic taking place, sparkly eyes being created and a soul being filled with energy.

Yes it is nice to be back at work. It is nice to be believing in the children and in their abilities, just like our family believe in Aimee. I am also enjoying observing the results of our belief and expectations, and everyone's hard work.