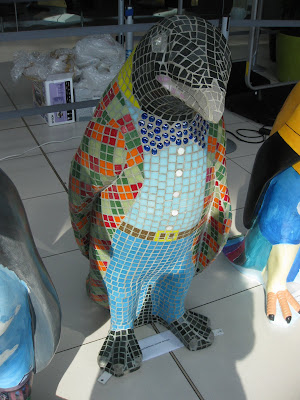 I was reading about the London Marathon in my free copy of the London Evening Standard this evening as I sat in a luxury plane winging my way home to Nürnberg.

(Yes, I made it, but more about that later.)

I read that the London Marathon, which takes place on Sunday and most probably in summer temperatures unfavourable to the runners, will raise four-hundred million pounds for charities. Now that is a lot of money.

I got to wondering about how much of that huge amount is raised for centres offering conductive education. I expect most of them could do with some of it.

As I read my newspaper backwards, as I always do, I moved from the sports pages to the centre spread, where I found a map of tomorrow's route that the runners will take, and I expect some walkers, needing anything between one-and-a-half and ten hours to complete the course.

After a few seconds I realised that I was reading an advertisement for beer. There was a list of all the Fuller's pubs that will be passed by, drinking places where the official marathon beer "London Pride" can be consumed.

In a corner of the advertisement was a man dressed up as a huge bottle of this very same beer and beside the picture a caption that stated that Rich Erdilek, from www.realbuzz.com, will be running or waddling perhaps. like a penguin, after only fifty hours training, dressed as a bottle of London Pride beer. It goes on to state that he will be raising money for a centre in Hampshire and that it is still possible to sponser him. This is a centre that provides conductive services to children with cerebral palsy.

How many others will be joining the runners on the start line tomorrow, hoping to raise a few pounds to help fund conductive centres in Britain?

Good luck to Mr Eldilek and everyone else running on Sunday. Whether dressed in the regular vest and shorts. or as a bottle of beer, or in a suit of armour weighing six-and-a-half stone, it is going to be pretty hot and sticky out there, but I image a lot of fun.

Running in the London Marathon is something that I have always wanted to do, since it started thirty years ago. Perhaps one day I will make it and then I too can raise a few pennies for conductive education.