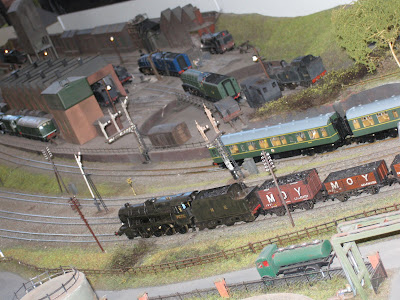 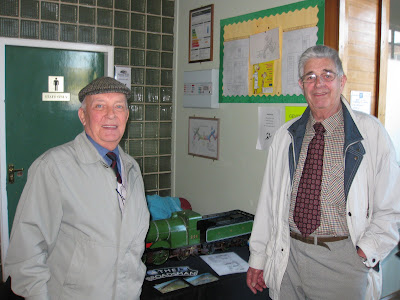 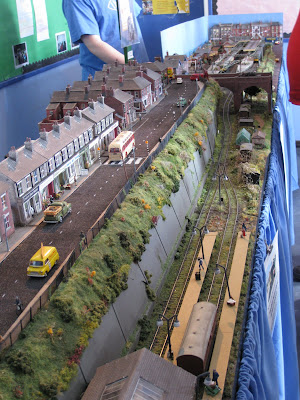 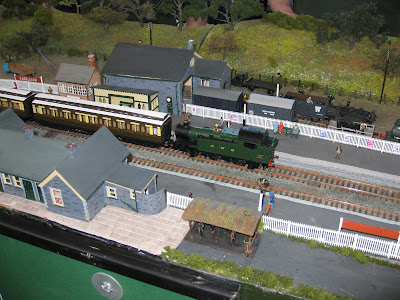 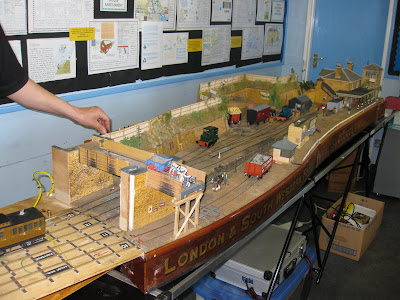 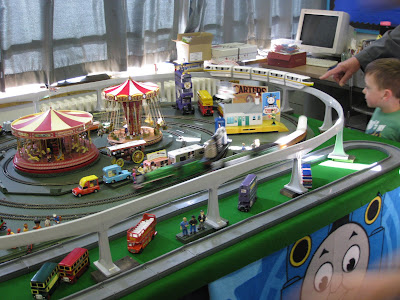 I thought that I was going to spend my Saturday morning looking at railway-layouts and rummaging through cardboard model-kits and odds-and-ends all on my own. But, at the last minute, Retired Driver K. L. Mallett, that‘s my Dad, decided that he would come too. You can’t imagine how happy that made me!
We had a wonderful time. I don’t know what the people who we chatted to liked most, that a fifty-two year old Great Auntie has an N-Gauge on her coffee table, or that her Dad was a train- driver. Not just a driver, but one telling them that at some time in the forties, when he just happened to be in Cambridge at the same time as the Mallard, but as second man on a different train, he asked whether he could fire her up, just so he could say that he had done it! Every fireman’s dream, I should imagine.
My Dad has so many of these stories to tell, and I thoroughly enjoyed having his company and hearing more of them.
Another advantage for me was that Dad also pointed out many things that I would have otherwise missed had I been on my own. He explained about skeleton signals and he showed me how the sheep pens fold down as the cattle wagons pull alongside, and all in Hornby OO! The layout in the centre of the hall with a diesel locomotive pulling twenty-five trucks, and a turntable in constant use was on of our favourites and where most of the stories got told.
At mid-morning we met one of my Dad’s old "mates", a man who is the same age as Dad who had been a fitter and who coincidently was also there with his daughter. The big difference is that his daughter doesn’t have an N-Gauge on her coffee table. In fact she told me that her Dad is really disappointed that none of his children is really interested in trains. I do believe that my Dad quite likes to be taken off by his daughter on an Easter Saturday morning!
It is always fascinating for me to be with my Dad and his mates
They talk non-stop railways, covering anything and everything from the 1930s to the present day. Wonderful drawn out descriptions of life on steam, diesel and electric. Not just about the actual trains but the bits-in-between too, the life on the banks and further afield. Stories about glow-worms to admire, pheasants to collect, cows to herd up, sheep to turn on to their feet again, rookeries and heronries, mourning swans and waving children. Stories from the mess room and the engine sheds, from the footplate and the shunting yards.
I would love to be a fly on the wall when they all meet next Friday for the Annual eunion of retired Norwich Railway men. And also today, when my Dad visited his school friend and driver colleague who he has known for eighty years. They followed each other on trains out of Norwich, on the road to London Liverpool Street for fifty years! They were in the Scouts together, learnt to sew together as five-year-olds, and now go swimming together and meet for lunch.

Back to school
On Saturday I did not just visit a model railway exhibition with my Dad: I also got to visit my old school. Even with its classrooms emptied of desks, chairs, teachers, pupils and school uniforms, filled instead with railway layouts and all the paraphernalia that goes with them, it really didn’t look much different. On the other hand, the rooms did seem much smaller than I remember, and the doorways were incredibly narrow. How did we get through them six abreast when the bell rang, with satchels on shoulders?
My former RE room was set out with models for children. Next door the English room had my favourite of the day, a layout of a holiday station, Fenley-on-Sea. This was a terminus station, very like Great Yarmouth, with a superb overall wooden canopy roof, but differing in its view of the sea, and beach huts and allotments with greenhouses along the sidings. There were also lots of boxes full of N-gauge building materials and tiny people in this room, that kept me occupied for a while.
In the Maths room was a stand advertising the newest preservation society in Norfolk, the Whitwell and Reepham railway, the M&GNJR. This is a long-since-demolished route out of Norwich City station that my Dad drove regularly in the fifties.
The enthusiasts there invited him ride on the footplate on the “Steam Sunday”, that happens on the first Sunday in each month. You can read all about it on the website:
http://www.whitwellstation.com/
In all the classrooms the paint was the same colour as it was some thirty-five years ago, the playing fields looked as green and well tended, the rows of grass tennis courts probably just as immaculately kept and the place smelt the same as it did in 1975.
It was one of many perfect holiday days
A day that was made even more special by a present bought for me by my Dad. He bought me a station building ”flat-pack” as he called it. Red-brick laser-printed on thick cardboard. I would have loved to have put it together with Dad but then it would have been impossible to transport it back to the coffee table layout in Germany.
We will have to make do with a play with my ancient OO Hornby collection that is in boxes in my childhood bedroom.
Note
Thank you to the friend and fellow enthusiast for sending me details of this exhibition:
Norwich Model Railway Club, 2010 Exhibition -
http://www.norhams.org.uk/
Posted by Susie Mallett at 00:39