Oh, I do like to be beside the seaside! 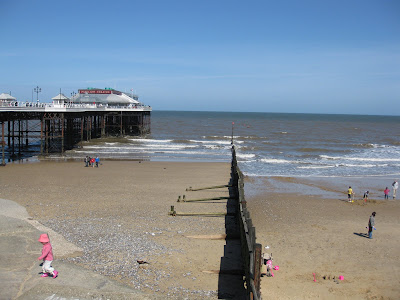 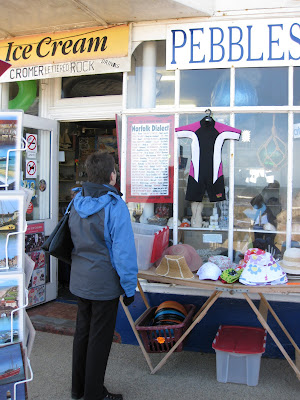 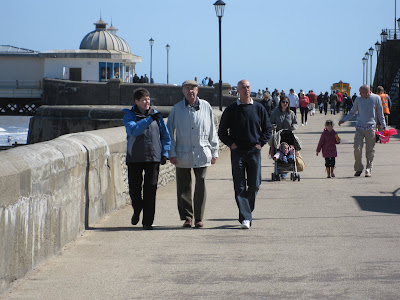 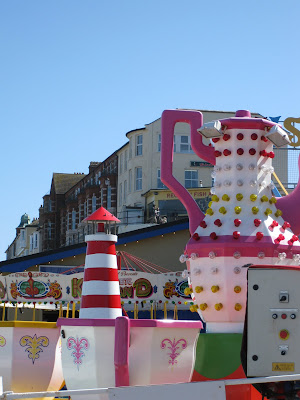 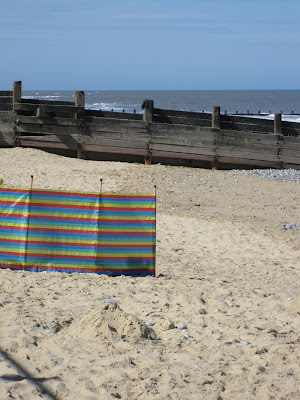 It was cold, sunny and really lovely driving through Norfolk villages with their flint-walled cottages and churches , daffodil-lined lanes, small white blackthorn blossom in the still black hawthorn hedges, and the sticky buds on the chestnut trees just bursting into life.
Seeing the sea
The bit of Norfolk up north is not as flat as one imagines our county to be. The ice age hit that part of the county and formed slightly rolling hills. Approaching the coast from this “hilly” direction is more exciting than driving eastwards out of Norwich where you “can see today who is coming to tea tomorrow”.

In my family whenever we are out for a trip in the car, we always rushed to be the first to spot the sea. ”"I can sea the sea” wass the call the winner needs to sing out. In North Norfolk one has to be much more alert, on the look out for a gap between the trees or a rise or fall of a slight incline.

To the east the sea appears on the horizon directly in front of the car. In the hilly north of the county it can appear just anywhere, on any side and just as suddenly disappear again. You have to be quick to convince everyone in the car that you have seen it at all.
Different seas and different worlds
At Easter the sea at Cromer was as flat as a pancake and as blue as the sky had been in England on Christmas Day.

Moving southwards round the north Norfolk coast in the direction of Lowstoft, Britain’s most easterly point, the sea although still the same North Sea changed dramatically. Within just ten miles of the blueness at Cromer, it became very choppy, and as brown as mud at Walcot. The wind remained just as lazy as ever and cut us in two. Our Norfolk wind always travels straight through the body instead of blowing around it, this is why we say it is lazy.

En route along the Norfolk coast southwards there was lots to see, all the familiar sights from childhood and some more recent. The rolling pasture with gorse bushes just coming into bloom leading to the caravan sites and sandy cliffs, the Ministry of Defense geo-dome at Bacton, looking like it was waiting for a leading role in the remake of the Prisoner, the British Gas power station a bit further south, and as always a few ships out to sea.

The cliff coastline gradually gives way to sandy beaches, with concrete seawall defences and wooden groins, all of which is gradually becoming inadequate. These defences can no longer head off the raging winter storms that now see Walcott and its caravan park under water more regularly than when it was our annual holiday destination in the 1960s. The tea rooms and many holiday chalets at Happisburgh are already lost to the ocean.

In the north at Cromer there are always several seaside “must dos”. These include a visit to the lifeboat station and its famous Henry Blogg museum, a feast of Cromer Crabs either for the tummy or for the eyes , a walk up the tower of the town church, a walk along the pier and a turn on the helter-skelter. And of course a paddle but not this time, it was far too cold!

Enough, till next time...

The weather was also too blustery for much promenading on the front so we retreated inland for a picnic in the park with delicious piping hot cups of take-away tea from the cafe on the corner.

I returned home to the garden with rosy cheeks and salty tiredness, pockets heavy with holes with stones round them collected from the beach for friends.

Oh, I really do like to be beside the seaside. It draws me back time and time again like a magnet.

“Oh, I do like to be beside the seaside”
http://www.youtube.com/watch?v=XmJVXHLjVhk
Posted by Susie Mallett at 21:41