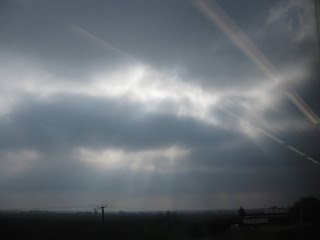 What is up with the world this morning?

I was on the train in East Anglia and, although the sun was there, it wasn't really. The Fenland sky was spectacular but different to the sky that I am used to, with its amazing cloud formations whatever the weather having vanished.

It was odd, so I sent a couple of texts to a friend, describing what I was seeing.

"There is an amazing grey layer clinging to the Fenlands, with blue above. It has the feel of Mexico City about it, a flat expanse always enveloped in smog. I can see Ely Cathedral on its slight mound looking as grey, mighty and impressive as the sky behind it. The river, the Ouse I think, is full to overflowing, reflecting the dark grey sky and hazy sun."

"Ely Station is, I think, the bleakest station that I have ever been on, but on a clear day there are such huge open spaces with marvellous views and skies that even the bitterly cold wind can be forgotten. Atmosphere is really wierd, like I imagine the end of the world to be, as predicted on a sandwich-board."

At this point I received two text replies:

"Here, in the city. all that the sandwich-boards have written on them are the fillings!"

There I was, alone in the wilderness of Ely Station, thinking that the world was coming to an end, and all I got was a text about sandwich fillings!

Undeterred, I carried on with my observations of the most amazing atmosphere and cloud formations, sharing it all with my friend. I continued:

"It is a lovely day, or should be. The sun is there, up above, with this greyness hanging right down to the black fenland soils like a sea fret."

I started to get worried. I had lived in Central Europe in the 80s and 90s, I remember the weeks of greyness, when government warnings were given, advising citizens to remain indoors because of high smog levels. It looked very similar today to those days.

I continued with my texting, now with a more concerned "lyrical waxing".

"Has there been a big explosion somewhere in the world? Something like Chernobyl? It is the same sort of greyness."

I suspected something was up, But what?

It felt strange because I was on a train in this age of high technology and I was not hearing a word from anyone around me about explosions or pending doom!

Eventually I got a text from same friend, telling me:

Ahah! So that was it. Volcanic dust was playing havoc with the East Anglian skies!

This revealing text was followed a few seconds later by another one, this time from my sister. She asked whether my train was on time or whether rail services were disrupted, affected as planes had been by the volcanic dust. I reassured her that I was on time, as obviously trains do a lot better with dust than they do with the wrong type os snow or with leaves on the line!

Just a few words of explanation for my ignorance.

I have been with my Dad, in his garden, working away on the digging and the weeding, isolated from the outside world by a high red-brick wall. I had taken a holiday away from television news and newspapers. But today the world appeared to catch up with me lsmost as soon as I stuck my head out of the door. The world from as far away as Iceland was all around me.

As I write I am still on the train, travelling through a greyness that really does remind me of those grey weeks after the explosion in Chernobyl. I hope that this natural disaster is less of a risk than that was.I it seems that with the precautions of advising vulnerable people to stay indoors and cancelling flights it probably will be.