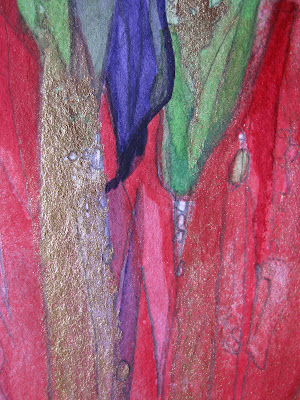 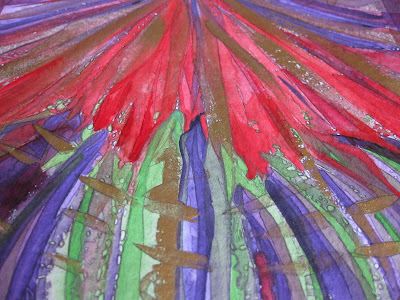 "Unfurling" by Susie Mallett, 23rd March 2010
Laughing
In Germany, in disability, and in Conductive Education

Last night I went to see a cabaret artist at the local Schutzenhalle, that’s the village hall to us Brits.

The hall was full to overflowing with four-hundred of the locals, all out for a jolly good hearty laugh.

And that is just what we were there for too. Me, my client and his sisters with their boyfriends joined half the village and laughed solidly for two whole hours.

The cabaret artist, Freda Braun, who came from just over the hill in Winterberg, had us it fits of laughter as soon as she walked in through the door at the back of the hall.

She had not even set foot on the stage but her very presence had us in stitches.

She had still to open her mouth and already the sides of every one in the audience were splitting.

She could, with a turn of a cheek, a wink of an eye, the nod of a head or a change of posture, have every single person in the room laughing out loud.

She had observed the movements of the characters she was mimicing in so much detail that she had enough information to write a conductive programme for all of them.

It was amazing how much talent there is to be found out in the countryside and how, with such seemingly simple means, one person can motivate a crowd to laugh!
Learning to laugh, appropriately
My client was a delight to have sitting beside me. He was laughing gently, trying his best not to let his laughing get out of control. He has had to leave many a performance in the past because he was disturbing the rest of the audience when his laughter has got louder and louder and he was unable to stop.

This didn’t happen last night. He had his laughter absolutely in control, he didn’t fling an arm at his neighbour or throw himself back in his chair, he enjoyed, he watched and listened and he laughed gently at the right moment. His timing was perfect too.

I think that he was so enthralled and so absorbed in what he was hearing and seeing, and excited by the fact that he understood why it was all so very funny, that this helped him to concentrate and not play the fool. He was laughing unconsciously, almost as a reflex. It sounded real and it remained in his control.

My client loves this kind of theatre as does his twin brother. His brother performs with the local theatre group and this has been the biggest motivation for my client to control his laughter.

He has watched several of his brother’s performances and has learnt to control the loudness of his laughter. It would be the end of the world for him to be asked to leave a show when his brother was performing. That is the best motivation that he could have had and last evening was evidence enough that it has worked.
A task for others too

The client I was with last night is not the only one of my clients to have problems with laughter. It is often very difficult for people with cerebral palsy to laugh in the appropriate place, with the approriate volume, and for the appropriate amount of time. And very often the needle gets stuck. They cannot get out of laughing mode however much they try.

I have a client who is now at university who would phone me for tips about laughter. She oftern had problems when at high school, usually in the middle of a maths lesson. She would find herself still laughing long after her teacher had made a witty but not particularly funny remark. Her peers had long forgotten it but she would keep switching back into laughter mode, and this she found extremely embarassing.

It was difficult for her, but we got it under control eventually. She developed a technique of thinking through a list of very serious subjects that we compiled until the laughter stopped.
Back to the cabaret
My client was in his element. He had been excited all day about the evening out, but I had been a bit dithery about going. Sometimes I do not enjoy this sort of show. I can find it incredibly embarassing when jokes do not raise a laugh. I must say I had been very doubtful, unsure about what we would find in a village hall in the countryside.

I need not have worried: last night there was no embarassing moments at all, Freda Braun was wonderful. I surprised even myself by laughing out loud for two whole hours and I just loved listening to myself doing so.

Not only did I enjoy my own laughter but that surrounding me on all sides. It totally enveloped my whole being.

The old ladies behind us seemed to think the same, they were roaring, one with her deep bass laugh and another with her high soprano. They had the effect of the Laughing Policeman on all those near enough to hear.

What I enjoyed as much as anything, almost as much as the hundreds of jolly faces, was understanding every word. This meant that I was able to laugh at every single joke, even those about the surrounding villages and the Catholic Church. There is a lot of friendly inter-village friendly rivalry, and just about every one is Catholic in that area.

There were no strong regional accents for me to need interpret, as there are in the Bavarian theatre that I am more used to experiencing. So I laughed a lot more than I usually do!

Freda Braun is quite well known in the area and someone has found her funny enough to write a Master‘s research paper about her and about her extraordinary ability to keep a whole hall full of people rolling about in the aisles for two hours non-stop, even when she isn't speaking. And she achieves this just by describing events that could happen in our everyday lives.
Of course every minute of the show is worked out and is timed to the second.
Laughing in Conductive Education
Freda Braun has the sort of timing any conductor would eat their heart out for, but her show flows so naturally it really is something special, well worth a Master's research paper!

I wonder if disability and the ability to control laughter is worth writing a Master’s research paper on too. It is certaining just as special when clients such as the two mentioned above have their laughing skills well enough under their control to go out anywhere without being afraid of being asked to leave.

Andrew Sutton’s posting yesterday was a rather sad one, called "It's been a poor old day. I could do with a laugh". Well, I thought, we all feel like that sometimes and I was about to suggest that he read my own posting on laughing when I realised that it was no longer there!
That discovery didn’t make me laugh very much and I for one don’t find "research" all that funny either but, with my evening out and my now re-written laughter posting, I think that I got the better deal.
http://www.conductive-world.info/2010/03/it-has-been-poor-old-day.html
By the way, if anyone read my original laughter posting disappeared and thinks that I have left anything important out of the new, one please let me know.