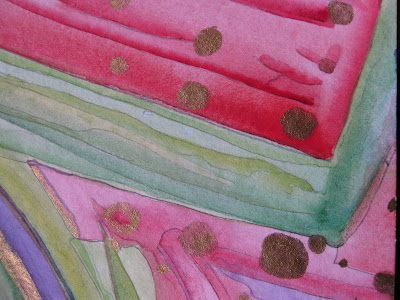 It seems like an age ago since going home late one evening on the tram I last wrote a list of the highlights of my just-finishing week.

It had been a really difficult few weeks, always working alone, and I had done this list-writing exercise really to tell myself what I had achieved despite feeling totally inadequate.

I discovered that the list was quite long considering, and the super, top-of-the-list sucesses had both been with the same young boy, a four-year-old lad who is, sad to say in my opiniony, on the brink of having the word "autist“ written all over his personal papers.

"Autistic?" Daft! (the very idea, not the child)

I taught this child to ride his very first and very new three-wheeler bike. It took us fifteen minutes at the most.

I also showed him how to build a very high tower out of Duplo bricks. That’s Lego for little hands.

It was the very first time that this child had put more than two bricks together at one sitting. He didn’t throw one of the thirty-two bricks that we used on the floor, and he didn’t fling his hands around for a whole hour.

That is an awful lot of successes in one hour.

I am tearing my hair out about the so-called "diagnosis" that is sadly about to be made official. I am so worried that even more of the people who this child comes in to contact with will write him off, not even try, because they know that "autists can’t do that“!

I have already experienced such reactions from people who have only heard that this is what might be in the pipeline, so I do not think I am exaggerating my fears.

I am crying out to have him with me for just an hour every day. Look at what we have already achieved in that one hour:

In the previous week I witnessed a whole bunch of the school taxi-drivers who deliver our children, watch in awe as the same child, under a bit of directing from me, slowly but surely took off his coat, his scarf, his hat and finally his shoes and gave them to his driver to put away for him.

I had not taught him how to do these things. He had never done any of them on his own before in Kindergarten, but somehow he just knew how to do them all. He is after all four years old and has nothing wrong with his arms and fingers.

What I did was to expect him to do them all, and of course to realise in the first place that he could if he wanted to. With lots of encouragement to try and to find out what he has recently discovered, that he has an awful lot of hidden talents and skills.

As you can imagine he has been smiling like the Cheshire Cat quite often.

The next skill that he is trying hard to conquer is learning how to use his first wheelchair, with care! He is driving like a wild thing in it at the moment when he is left to his own devices. He has never been able to move around under his own steam before, except by crawling on the floor. He is discovering the thrill of speed, the wind in his hair and doing wheelies!

My motivation to write this: the Duplo tower and this:

I have very high expectations of my little lad with the new bike!