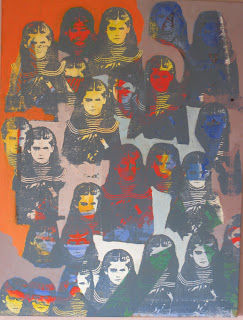 Images of Grandmother, by Susie Mallett, 1975

Who now has heard of Conductive Education?

I have been to the trade fair again this afternoon with a friend of mine. She had been so impressed yesterday when I told her about it that she asked whether I would go again today, with her .

We were just about ready to leave, having spent nearly three hours looking at gorgeous things and wishing that we were richer than we are but, before we went, I wanted to show my friend the wonderful chairs that are to be seen in the photos on the last posting. We were admiring them and at the same I was listening to the people running the stand, talking about how they were made. I suddenly realised than my friend was looking puzzled as she didn’t understand a word that they were saying!

Yes, they were speaking Hungarian, and I hadn't realised. The company was from Komoly near Pécs, a business outlet for the products made at a workshop in Germany. We were interested in the prices of the chairs so I asked for a price list in German. Of course after a few words in German I lapsed, as I do, quite easily into Hungarian much to the man’s amazement. Of course he then asked me what I did, wondering how I spoke Hungarian.

I told him that I had studied at the Petö Institute, and what an amazing reaction that brought! He shook me by my hand and congratulated me for being a conductor, he told me his daughter is a conductor too. I was able to share with this man information on conductive practice in Pécs, his daughter is looking for work and I just happen to know that there are conductors working in Pécs.

This was the very first time since I have lived in Germany that a stranger has asked me what I do and then known what a conductor is. I know this is cheating a bit, as this man was Hungarian and we were at a trade fair for disabled workshops, but even in that situation there would have only been at most a handful of people who knew about Conductive Education. We were both really pleased to have met each other.

I had started to write a different posting but the story above seems to me to be is a very good introduction to thwhat I had been intending to say.

I have been back in England. Whilst there with my Dad I discovered many treasures that my Mum had put in my room in the last weeks of her life, for me to find. Amongst them are my first books from infant school, my white summer gloves and school hat from grammar school. There is my very first grammar-school tunic (which still fits forty years on, not a lot of women of my age can honestly say that!) and parts of my girl-guide and brownie uniforms, complete with notebook, pencil, folded hankie, sixpence for the telephone, a compass and a piece of string, all still in the pockets.
The most precious find though were the travel journals that I had sent to my Mum, one a month, during my “round the world” trip many years ago. Six books, full to overflowing with drawings and paintings, and full of stories of people met and places seen. Of course I sat down to read, long forgotten memories returning as if it had all happened yesterday. Here is one of them…..

Very early at airport we seem to have been travelling for hours. The flight was delayed till 2.30 so watched West Ham v. Everton, news about conductive ed. in Brum and the awful King’s Cross fire…….

That’s just a snippet from the very first pages. There I was in Singapore waiting for a delayed plane and passing time by watching TV, with news about Conductive Education from the then new institute in Birmingham, and do you know, I was not surprised. At that time almost every newspaper you picked up, whether national or local had an article about Conductive Education. in it, either about a family off to Hungary with a child, a report from Birmingham or something political. Conductive Education was always in the news and almost everywhere that I went on my travels people had heard of it.

Centres popped up all over the world, they are still popping up, but the publicity got less and less. Somehow it wasn’t news anymore.

When I read these notes from my 1987 diary I remembered sitting there listening, all ears. I knew about Conductive Education even then, I had applied to study in Budapest with Birmingham’s first intake of students, I hadn’t had the required qualifications at the time so I had gone travelling instead. Many people knew about Conductive Education in those days, I didn’t have to explain what I did to people when I began my training in 1989, I was congratulated and was shaken by the hand as I was by that Hungarian father today.

What has changed? Could we do anything now to make CE world news in Singapore airport again , over twenty years on?
Posted by Susie Mallett at 21:10