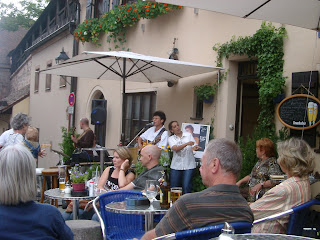 Birgit Endres, August 2008
It is that time of year again when Nürnberg offers one musical experience after the other, two classical open-air concerts attracting audiences of up to 60,000 sandwiching the Bardentreffen, which took place this weekend.
I am writing this while enjoying Birgit Endres and Band sing the blues outside Albrecht Dürer’s Haus, having seen Sandy Dillon rocking in the Hauptmarkt.
There are many official stages around the city, with invited guests performing on Friday, Saturday and Sunday. These guests are often upstaged by the performers on the unofficial stages, those who perform on the bridges, in shop doorways and in cafes all over the city.
I enjoy Friday evening and Sunday afternoon when the streets are less crowded and an air of calm hangs over the city, I was however encouraged to fight through the crowds on Saturday evening by the attractive offer of a free Joan Armatrading concert just a ten minute walk from my new flat!
This is why I moved!

This year there seem to be a lot more children taking part, and the best ”musical” experience for me today was on the Museum Brucke where I saw a small young lad of about seven years of age, with his recorder and sheet music. In front of him was a sign that he had painted saying : “Ich bin vielleicht nicht gut aber mütig!", "I may not be good but I have courage!"
Mütig he certainly was.

On seeing the many courageous children playing at their first Bardentreffen and seeing how they lost their nervousness as they were encouraged by the applause and the cents filling the hats in front of them, I started to think of all the children I come across in my work and of the courage they show as they fight against the odds. I wondered how many of them realise, as the boy with the recorder did, how courageous they actually are. How many of them would create a similar sign for themselves?
I would have liked to have made some changes to the recorder boy’s sign and add for starters the word “yet”- I may not be good yet, but I have courage!

I can think of many examples of children and young adults with courage in my personal experiences at work:
- there is 18-year old Margit who is being very mütig as she learns to drive, overcoming problems with spatial awareness and orientation, slowly and surely to take one courageous step forwards towards further independence
- and another 18 year old, Steffen, who despite his disabilities has learnt to control his movements in order to paint, exhibit and earn some pocket-money
- and how 10-year old Sven, despite hemiplegia, plays tennis and football, plays the piano and drums, and is about to begin comprehensive school tomorrow, joining a class where all the pupils will learn to play a brass instrument and form an orchestra.
- and of course there is Freddie H, courageously off to study in Iceland on Wednesday.
All these people are entitled to hang a sign around their necks reading “I am getting better and better at all I do in my life because of my courage.”

I hope to see the little boy on the bridge, with his recorder and his courage, at the 34th Bardentreffen in 2009.